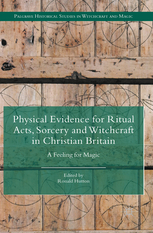 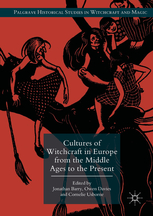 Some things are hidden in plain sight. If you don’t expect to see evidence of another culture, it can remain unseen even if you’re staring at an important symbol of it. For instance ‘Green Men’ in churches have long been overlooked, and ‘Green Women’ have escaped notice even after their male counterparts were recognized. Other example is that when ‘female figurines’ were excavated, some archeologists – men – assumed the depicted women were ‘prehistorical pin-ups’. When in your society, now, God is a man, it seems to be difficult to imagine that once ‘God was a woman’ and that these figurines may have been religious, that they may have symbolized goddesses.

Thus it happened that evidence in historical archives and museum was never recognized as magical in nature, until archeologist and museum curator Ralph Merrifield studied them. In 1987, when he was retired, he published the book The Archeology of Ritual and Magic. He not only studied deposits from the pagan Roman and Anglo-Saxon period, but treated more recent artefacts in the same way. The belief in magic did not disappear when Christianity became the dominant culture, but researchers had attributed deposits to other motives of the people who had used them or buried them.

Times have changed, and there even is a whole series called ‘Palgrave Historical Studies in Witchcraft and Magic’. (See also the reviews Magic and Witchery in the Modern West and Witchcraft in Early Modern Poland). Series editors are Jonathan Barry, Owen Davies and Willem de Blécourt, the Dutch historical anthropologist specialising in the study of witchcraft and folk magic in Europe. In 1990 he wrote his Ph.D. thesis Termen van toverij: de veranderende betekenis van toverij in Noordoost-Nederland tussen de zestiende en twintigste eeuw.

The contributors of the second book, Cultures of Witchcraft in Europe from the Middle Ages to the Present. Essays in honour of Willem de Blécourt, are long-standing experts on the history of European witchcraft and magic. They are historians, anthropologists, literary scholars and folklorists from several European countries, who have all worked with De Blécourt. The authors explore themes and approaches which he had pioneered. The chapters are on:
– Witches and devil’s magic in Austrian demonological legends
– Hanna Dyâb’s witch and the great witch shift
– The mirror of the witches (1600): a German baroque tragedy in context
– Unravelling the myth and histories of the weiging test at Oudewater: the case of Leentje Willems
– The North Sea as a crossroads of witchcraft beliefs: the limited importance of political boundaries
– Kind in words and deeds, but false in their hearts: fear of evil conspiracy in late-sixteenth-century Denmark
– Ein gefehrlich Ding, darin leichtlich zuviel geschicht. The end of village witch trials in the Saar region
– News from the invisible world: the publishing history of tales of the supernatural c. 1660-1832
– Researche reverse witch trials in the nineteenth- and early twentieth-century England
– The catechism of witch lore in twentieth-century Denmark
– Magic and counter-magic in twenty-first-century Bosnia.

The first book, Physical Evidence for Ritual Acts, Sorcery and Witchcraft in Christian Britain, is really about physical objects and their meaning:
– Magic on the walls: ritual protection marks in the medieval church
– Apotropaic symbols and other measures for protecting buildings against misfortune
– Instances and contexts of the head motif in Britain
– Witch bottles: their contents, contexts and uses
– Concealed animals
– Shoes concealed in buildings
– Garments concealed within buildings: following the evidence
– Spiritual middens
– Textual evidence for the material history of amulets in seventeenth-century England
– Amulets: the material evidence
– Cunning-folk and the production of magical artefacts
– The wider picture: parallel evidence in America and Australia.

Apotropaic symbols were meant to avert evil, and can be found alongside entrances such as doors, windows and chimneys. They could be circular (or for instance a triquetra in a circle – see the book cover), heart-shaped, diamond-shaped, X-forms and letters of the name of the Virgin Mary. Some marks can be dated very precisely, and were certainly inscribed during the building of houses, barns and stables. The meaning is not so clear, although we know the entrances were perceived as danger zones in buildings.

Magic on the walls is also found in churches, as early graffiti. A large scale survey of medieval churches throughout England brought to light a mass of previously unrecorded graffiti inscriptions. Before they were studied they were thought to be rare, but the systematic and large-scale survey showed how widespread the phenomena once was. Not just in England, but all over Europe. There are at least five specific types or designs of apotropaic markings in medieval church context: compass-drawn symbols; VV symbols; ‘merels’ type (a series of squares or rectangles); swastika pelta of Solomon’s knot; and pentangles. The latter two are more rare than the other three.

As the chapter titles suggest, a lot of things were intentionally hidden in buildings, during the building. Amongst those the witch bottles, that are only found when buildings are demolished or repaired, or researched by archeologists. When builders find these objects, they may not recognize the objects as magical objects, or they do recognize them, and destroy them out of superstition.
Witch bottles were described in pamphlets and books in the seventeenth century and after. So we know of the magical intentions, and why certain items were used as contents.

It is very interesting that nowadays these objects are studied even though their meaning is unclear since there is no written evidence about the magical purposes. But without the realization that these pieces of folk culture may have a story to tell, they could be destroyed and no-one would ever know.