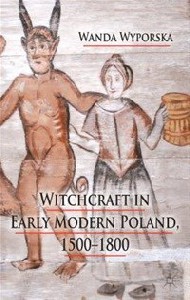 The history of Poland differs in several aspects from that of other European countries. Wyporska explains that the dominant feature of early modern Poland is the all-pervasive power of the szlachta, translated widely as ‘nobility’, and that they played a key role as judges, accusers, victims and witnesses in the witchcraft trials. The judicial system was extremely varied on a regional, local and village level. As in other countries though, torture was a standard procedure. And women were not the only victims of witchcraft accusations. Chapter 3 explores witchcraft and gender. Some accused women were business women like beer brewers, but many were domestic servants.
The Polish borders have not been fixed during the centuries, rather the opposite. The greatest extent was in 1634-1635, but the country suffered wars on all sides during most of the seventeenth century. During the last quarter of the seventeenth century and the first quarter of the eighteenth Poland was sliding towards decline and during this period a peak shows in the witchcraft persecutions.
Contrary to what you may think, by 1660 less than half of the population was Roman Catholic. Others were members of Eastern churches or followers of protestant reformers, and there were Muslims and Jews. And interesting for our readers is this sentence in chapter 5 (and what follows): “There is evidence that rituals and beliefs associated with the pre-Christian religious system were still apparent in Poland, as late as the sixteenth century and conflicting views among historians and ethnographers as to the nature of Slavonic pagan beliefs provoked great debate.”

The themes for this study are:

Another of the key aims of the study is to provide an overview of witchcraft trials heard before the municipal courts in Wielkopolszka, in tandem with a wide variety of contemporary literature in which witchcraft was discussed. The author studied the source materials, in Polish.
The study defines witchcraft as a set of beliefs or practices regarded as using supernatural power to harm or heal.

To highlight only a few aspects of this thorough study, there’s the issue of gender. Many details of the witchcraft trials refer directly to traditionally defined feminine space: the household. Most accusations of maleficia concerned health, fertility and productivity – areas generally seen as responsibilities of women – and their opposites: feeding (poisoning), child-rearing (infanticide), healing (harming), birth (death).
‘Disorderly living’ was indicative of a criminal life, for instance when a widow had a reputation of theft or prostitution. Witchcraft could be the next step. And the possession of herbs – sometimes worn by clients of witches – could be interpreted as evidence of being a witch.
Some men were sentenced – together with their convicted wifes – because they had played music (pipes, dulcimer) during the sabbats. Some men were accused of spoiling milk, but patriarchal Polish society regarded witches as predominantly women, “as evident from demonology”. ‘Diabolic sex’ was mainly a female prerogative in demonology.

A pantheon of Slavonic gods was included in the Annales by Polish chronicler Jan Długosz, writing in the latter half of the fifteenth century. A god named Czarnobóg, black/dark God, led some scholars to surmise there must be a dualist Bialobóg, white God. “The lack of sources for the period makes a conclusive answer unlikely, but there is consensus as to the strong belief in demons and spirits, who dwelt in rivers, lakes and woods, and those who also lived within the home and were placated with gifts, especially in the eastern regions.” Glimpses of these ancient Slavonic beliefs can be seen in trial confessions.

All in all a very interesting read, even for someone like me who never had a great interest in Poland, let alone in the Polish judicial system. Wanda Wyporska is a journalist and writes well. And according to an interview she is writing a trilogy of time slip novels based on the witchcraft trials. Those may be very interesting to a larger audience!