Review: When a Pagan Prays 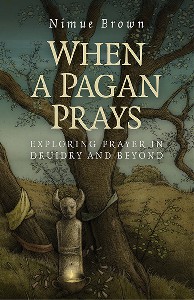 According to Nimue Brown this is not a book, but two books that have somehow managed to occupy the same space. “One of those books is an amateur attempt at some academic writing, featuring comparative religious studies, psychology, sociology and a bit of research. The other book is an experiential tale of what happened to me when I started to explore prayer as a personal practice.” The academic approach simply does not work. Although the first question, ‘other religions use prayer extensively and apparently we don’t. Why is that?’ requests for a more academic study. And the first book (How to Pray, by Anglican Christian Jophn Pritchard) gave this idea of prayer: “Essentially it is about entering a mystery, not getting a result.”

Prayer is something that people do as a manifestation of religion or as part of a spiritual practice. You get what you bring. “If you are willing and able to be open, vulnarable, listening, if you are here to be changed, that’s a very realistic possible outcome, no matter which tradition you follow or the methods you adopt.”

The author is a Druid. “Offering up prayers of praise, gratitude and confession are part of the world view in which a relationship between human and divine is clearly defined.” This is not the case in Druidry, or in Pagan traditions in general. But Druidry, as other Pagan traditions, expects its adherents to figure things out for themselves and take responsibility for their own practices.
Prayer is a form of ritual, says Brown. In Druid rituals no one is ordered into the circle. No gods are assumed to put in an appearance. “Instead, we greet whatever is there and express our openness.” But to whom does one pray when everything is open? “Prayer is, in essence, an attempt at starting a conversation with something.” And what to pray for?
Brown started to ask around about praying, and read several books on the subject. Most people addressing the subject are monotheists and for them it’s obvious who to pray to. Brown experimented, and found help in literature on Shinto. And surprisingly in a New Age book by Wendy Stokes, who talks about defining the nature of the kind of entity you want to work with. “Rather than trying to find names and personifications to call upon, she suggests thinking about what the entities do, and calling to that.”

This way Nimue Brown guides her reader through the subject, sharing the experiences she made on her journey. She describes the ethics of prayer, the social functions of prayer and the practicalities of prayer. Also how prayer can fit into the – or a – Druid practice, making Druid prayers, and the use of prayers in ritual. She also speaks about non-verbal prayer traditions and in the end about how prayer changed her life. Very interesting for anyone who is open to this way of addressing the Sacred.