Reviews: ‘Magic and Witchery in the Modern West’ and ‘The Triumph of the Moon’ (revised edition)

Magic and Witchery in the Modern West-Celebrating the Twentieth Anniversary of ‘The Triumph of the Moon’
Editors: Shai Feraro and Ethan Doyle White
Essays by amongst others: Jenny Blain, Sabina Magliocco
Palgrave Macmillan, 2019. ISBN 978-3-030-15549-0

About this book: This book marks twenty years since the publication of Professor Ronald Hutton’s The Triumph of the Moon, a major contribution to the historical study of Wicca. Building on and celebrating Hutton’s pioneering work, the chapters in this volume explore a range of modern magical, occult, and Pagan groups active in Western nations. Each contributor is a specialist in the study of modern Paganism and occultism, although different in their embrace of historical, anthropological, and psychological perspectives. Chapters examine not only the history of Wicca, the largest and best-known form of modern Paganism, but also modern Pagan environmentalist and anti-nuclear activism, the Pagan interpretation of fairy folklore, and the contemporary ‘Traditional Witchcraft’ phenomenon.

New to this Edition: This is the second, and extensively revised, edition of the first full-scale scholarly study of what is arguably the only fully-formed religion that England has ever given the world: that of modern Pagan Witchcraft, which has now spread from English shores across four continents. This edition incorporates all of the new research carried out into the subject by the author, and by others who have often been inspired by this book, during the twenty years since it was first published. 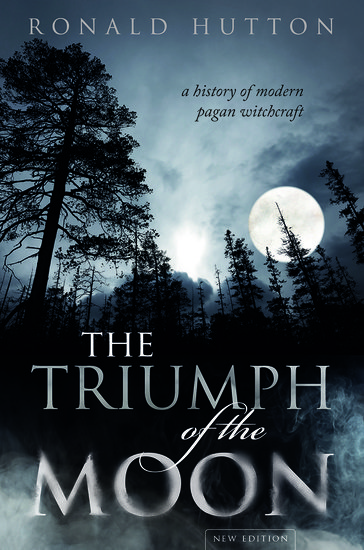 Two books have recently been released to mark the twentieth anniversary of the first publication of Ronald Hutton’s The Triumph of the Moon.

Firstly Magic and Witchery in the Modern West edited by Shai Feraro and Ethan Doyle White. Unfortunately this seems to be primarily an unholy alliance between academics desperate to add ‘publications’ to their CVs, and a publisher overly-interested in profit. To be fair, some of the papers do have  considerable merit, but for a small, print-on-demand book, the publisher is asking an outrageous £89.99 … although one can buy electronic access to individual chapters for a mere £23.94 a time! The book is not large, consisting of prelims plus approx 250 pages.

One cannot blame the editors for the publisher’s exorbitant pricing policy, but they really should have taken more care over their use of terminology. For example, I am sure many would question their description of  Hutton’s ‘Triumph’ as a monograph 2, or their assertion that he has produced “eight further monographs”. Also to this old codger of a reviewer, it seemed telling that the ‘Murray thesis’ is given a seven line end-note, yet it is assumed  that everyone will be familiar with Pike’s distinction between emic and etic approaches.

Secondly, there is the “second and extensively revised” edition, of Hutton’s ‘Triumph’. This is a handsomely produced book, with an elegantly designed dust-jacket, consisting of prelims plus approx 500 pages, with a cover-price of  just £25.

As stated by the Publisher:

“This edition incorporates all of the new research carried out into the subject by the author, and by others who have often been inspired by this book, during the twenty years since it was first published.”

Hutton is not only an outstanding scholar, but he is also an exceptional author, writing prose of rare panache and style. I recommend this new edition of the book without reservation, even for those who have already read the first edition.

Both books are available at slightly reduced prices from various internet book sites, however care needs to be taken when looking for Hutton’s book, as apparent bargains will almost certainly turn out to be paperback copies of the first edition.

Just minutes after completing the first version of this review, I looked at Facebook and was immediately  hit by a sponsored post from the publishers Palgrave Macmillan, announcing a ‘Cybersale’ of their scholarly titles. Books normally selling for nearly £100 were being offered for £9.99, including world wide postage! Amongst the sale books was Magic & Witchery in the Modern West. The cybersale announcement stated that it would end on 3rd December, so it will be finished before this issue of WROnline is released. However if anyone is interested in acquiring the book, it may be worth checking the publishers’ website to check whether the cybersale may have been extended.  Alternatively, I expect there will be a lot of *cough*, secondhand copies being offered for sale, at far below the official price, in the coming months.

1  With apologies to Lennon & McCartney

2 “A work, generally short, dealing with a single subject and usually issued in pamphlet form.”

Dit bericht is geplaatst in Boeken, English articles, Recensies met de tags history of Wicca, Ronald Hutton, Triumph of the Moon. Bookmark de permalink.
We use cookies on our website to give you the most relevant experience by remembering your preferences and repeat visits. By clicking “Accept All”, you consent to the use of ALL the cookies. However, you may visit "Cookie Settings" to provide a controlled consent.
Cookie SettingsAccept All
Manage consent