Review: The Temple Priestesses of Antiquity 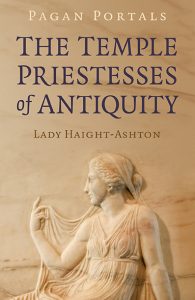 In this book you’ll find an overview of well-known and somewhat lesser known European and Middle-Eastern Priestess cultures. Haight-Ashton describes herself as a modern oracle and seer and tries to outline the known oracular centres of the European and Middle-Eastern region. She is passionate about the subject and tries to paint a historical picture from a ‘herstorical’ perspective.

As much as I can appreciate the effort, the reality is that little detailed information about the Northern European Temple Priestesses has been preserved. And a lot of the information that was passed on by ancient (male) Roman or Greek writers, describes history from their own cultural perspective. The author tries to fill in the gaps by asking a lot of questions, and speculating even more about the answers. Mix this with historical fact and it all becomes an appealing picture, but a murky picture. Is it how Temple Priestesses actually functioned in their societies? The idea of examining culture from a herstorical perspective is certainly valuable but it should, in my opinion, still stick to the facts.

I would have loved this book if it was written using academic sources and current research. The sources show however that most of the information was sourced online from Wikipedia and Britannica. To me this undermines the idea of using current herstorical research for which you‘d have to dig deeply into academia rather than mainstream online resources.

What bewilders me further, is that as an American author, she completely ignores her own Native American and Afro-American backyard, when talking about modern day oracles. In the Santería, various Vodou traditions and Candomblé, the current Priestesses who act as intermediaries and trance oracles are very real and firmly grounded in their cultures.
All in all, this book will give you a Euro-centric bird’s eye view of most major oracular Priestess cultures, but do keep in mind that in other parts of the world there has been and still is a lot more going on.