Twenty years ago Merlin looked back at the first twenty years of Wiccan Rede. He ends with the question “So what about the next twenty years? How will our ideals take shape?”
Maybe it is good that the clouds did not lift to reveal that future, as before another ten years had passed, his life had taken unexpected turns, the paper magazine ceased to exist, and Merlin withdrew as editor. Alas, when he once again concentrated on his own inner light, and started to give shape to his own ideals, he found out he had cancer. Early 2012 he died, still full of plans. 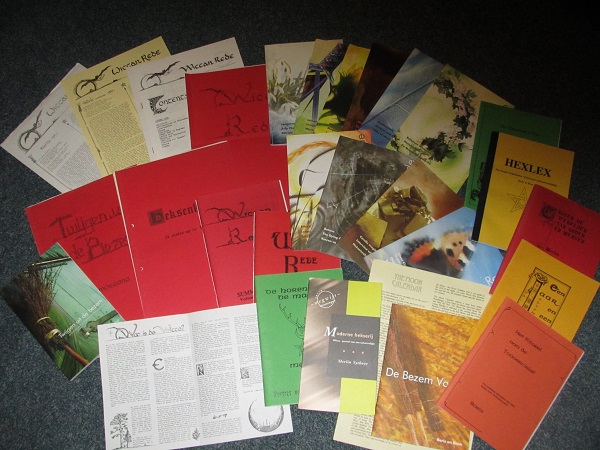 I knew, when Morgana and I discussed the idea of starting a magazine, that magazines are hard work, have a tendency to disappear, and are usually filled by the editor… At least, that is what my high school experience of running a school rag had taught me. I am therefore pleasantly surprised that life has proven me wrong on two out of three counts!

First though, let me congratulate you, the reader, because in your hands you are holding the 80th issue of Wiccan Rede! We have published close to 3500 pages filled with articles, news, reviews, thoughts, ideas, reports and insights! No doubt it will become a valuable collectors item!

No, Wiccan Rede has not disappeared – better still, we have only skipped one issue ever – which is why this one is number 80. Not that we are always on time though… The issue we skipped was in the Summer of ’85. Our daughter was born on Midsummer’s Eve, we had just moved into a new old house, the floors were up, the typewriter was still packed away, the tiling in the bathroom was only just dry, the garden looked like a refuse dump, and I was teaching our first black cat that it is simply not done to finish the baby’s milk – not even when you are a familiar… How do you mean, glamorous witch?

Also, I am very grateful to all those writers who have proven me wrong on the third count. Famous writers like Marian Green and Dolores Ashcroft, and also the many dozens of not famous, not yet famous or have since become famous Dutch and English writers. Some of them have become part of the staff of Wiccan Rede: Jana, who does the news column, Boris, who writes regular articles, and quite a few others who contribute off and on, on a regular basis. Thanks to you all!

As for the first count – yes, I’m afraid that magazines are hard work, and will remain so. Many a time I have been on the verge of throwing in the towel. Producing a magazine can take anywhere from two to four weeks, depending on how much material still needs to be written, how many books need reviewing, and how many ideas you have. Weeks when everything else takes a back seat – odd jobs around the house, mail, administration, correspondence and so on. Trying to do that, and at the same time trying to organise a fire festival for your Coven, running your daughter off to swimming lessons, folk dancing or horse riding, and keeping odd customers happy is a certified stroll to stress and disaster…

So why do you do it? Why sacrifice so much of your spare time? Why invest so much energy? It’s not as if you’re getting paid or something! Well, in my case it boils down to enthusiasm, ideals, and energy. Not in the last place Morgana’s energy to keep me going…

When I first discovered the Craft, via books and magazines, it struck a chord deep within myself. Some ethereal string was plucked, and I’m happy to say, the music hasn’t stopped yet.
I started off, as have many of you I presume, with an idealised image of what a Coven was like, what witches were like, and how meaningful life would be once you had become a witch. As with most ideals, once they come into contact with the real world, they lose some of their shine, some of their attractiveness. Yes, I have met people who pretended to be witches. And I’ve met people who were witches once, but had lost contact with the mystery. But after a few years, we were fortunate enough to meet some real witches, who had contacted the Goddess and the God, and were able to radiate that contact to others around them. They “knew” we were coming, and they were happy to take us in and to train us. But, and maybe this is far more important than anything else, they were able to pass on their contact with the Gods, and their inspiration! The ethereal string within my soul was singing, and thanks to them, it has kept on singing all these years.

When Morgana and I had descended once again into our own realm, the Netherlands, we realised that our happiness lay in being able to pass on this inspiration. Ideals like this shouldn’t lose their lustre because of setbacks in the physical world. And that is how this magazine started. A focal point, a point of contact, the proverbial candle in the dark… To share the music with those, whose inner string responded to the Goddess and the God.

I don’t think our basic ideal has changed in the past twenty years. Our main happiness still lies in finding this spark in others, in being allowed to inspire others, and in celebrating our rites in the close-knit warmth of the Circle. But the ways we have expressed our ideals has changed over the years.

We started with this magazine. After a couple of years, this was followed by the inauguration of monthly meetings. This was way before pub-moots… Simple evenings where all sorts of subjects could be discussed, where we did practical work, candle magic, pathworking, exercises, and socialising. A few years later, a proper Outer Court ritual group was started, where we celebrated the eight major festivals. In between all this, there were private meetings with newcomers, teaching sessions and training sessions. Until we reached the point that we said “Yuck! Another festival!” when the next meeting came around. We realised that we spent about 40 weekends in the year running various groups and meeting people, and although that went fine for a number of years, this situation couldn’t last forever…

Thankfully, during all those years, the Craft has grown tremendously. There are quite a few very good people around who are more than willing to meet new people, who are very capable and can train others. Slowly, informal contact between the various groups became more regular, and we were able to help each other with advice and tips, exchange news and keep in touch. This enabled us personally to take a step back, to step down our activities, and once again concentrate on our own inner light.

Not too long after that, the idea of the Witches Café was born. It took quite a while before we had found a suitable location, and in the end it was Magnus who pointed the way, even when he couldn’t attend physically anymore. The Witches Café in Utrecht was off to a slow start, 5 people, 10 people, 5 people, 12 people… But after a while, it seemed as if the “concept” of the Witches Café had taken root on the astral, and now these meetings are successful beyond belief, with 40 to 50 people attending each month, four more cafés around the country, and even one in Antwerp!

The Witches Café to me is yet another manifestation of our ideals – to inspire others, and to meet with others whose soul sings. These café’s are open to anyone, initiates and non-initiates alike, interested partners, family and friends, and for the past few years they are also open to all PFI members.

Some people may not like this openness, restrict it to initiates only, or even claim such an event for themselves. However, there is one thing our own High Priestess taught us, and that is “There is nowt as queer as folk”. Some people are attracted to the Craft for completely the wrong reasons. Or from another perspective: these are the only reasons they can find to explain what is happening inside them. But that is not to say that such people may not find the right reasons, once they have a bit more experience, and understand their own inner calling. She has shown us in practice how this works, and we have seen it too.

So what about the next twenty years? How will our ideals take shape?

As a “proper” witch, I should now take out my glass eye, uhmm, crystall ball, and cackle something like “I see, I see…” hoping that the clouds will lift. Sorry, not in public! I’m sure the Lady Nehallennia and the Lady Holda will have plenty of ideas, and will be there to inspire the right people at the right time. All this openness is all well and good – and by openness I’m also referring to the public face of the Craft, as it is portrayed in books, series, articles and so on. But too much inspiration is like a fire-cracker: energy spent in a gorgeous display but with nowhere to go. I hope that those who are listening, psychically, will pick up the call and offer a channel for all this energy. Bring it down to earth. Not as the empty husk of a burnt out fire-cracker, but as the beautiful glow of the firefly, alive in the dark! Preserve the mysteries for the soul that sings. That is my wish for the next twenty years!