Review: God Is Dead, Long Live the Gods: A Case for Polytheism 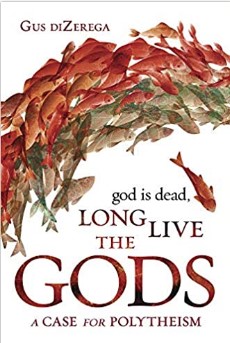 Gus DiZerega is not a new name for Wiccan Rede readers. He has previously written 3 articles (see links below). Many of his ideas in these, and other articles, have culminated in this book: God is dead.

On the back cover we read:

Powerful New Perspectives on the Integration of Science and Spirit

“Examining the relationship between polytheism and quantum physics, biology, and ecology can open new vistas of sacred discovery. God Is Dead, Long Live the Gods develops a bold new vision for polytheism’s evolving role in our society and in our individual and collective spiritual experiences.

Join author Gus diZerega as he explores contemporary science to show why consciousness is a fundamental aspect of reality and why polytheistic experiences are as varied as the vast array of living organisms that enrich our world. This book shows why monotheism is actually a form of polytheism, and it explores fascinating spiritual concepts such as thought forms, mystical experiences, shamanism, spiritual healing, and universal love.

Whether you’re interested in the mind-bending implications of emergence theory or want to know if the universe is alive, you will discover transformative answers and a new integration of science and spirituality.”

Probably more shocking and mind-blowing to those of the Abrahamic faiths than to neo-pagans, the idea that monotheism is fraught with misconceptions and at best ‘fuzzy logic’, this book is fascinating.

In the chapter, ‘The incoherence of Monotheism’ Gus argued: “the idea of monotheism is incoherent and has led to endless strife and slaughter by combining it in coherence with demands that some version of it dominates all other religious points of view. With religious freedom, monotheism fragments into many different deities with devotees of each claiming theirs is the only one.”

As Gus points out ‘religious freedom’ has offered us the opportunity to chose how we interpret mystical experiences and perhaps why many people prefer to speak today  of being ‘spiritual’ rather than ‘religious’.

For anyone interested in Interfaith or Interreligious dialogue this book is a must.

"Morgana is Anglo/Dutch and lives in the Netherlands. She is a practising Gardnerian HPS. Over the years, she has facilitated a variety of Wiccan groups. She is co-editor of the international and bilingual "Wiccan Rede" magazine, which was launched in 1980 and is coordinator of Silver Circle, a Wiccan network in the Netherlands. As International Coordinator for PFI she travels extensively giving talks and workshops about Wicca and Paganism."
Bekijk alle berichten van Morgana →
Dit bericht is geplaatst in Boeken, English articles, Recensies met de tags polytheism, Quantum physics. Bookmark de permalink.
We use cookies on our website to give you the most relevant experience by remembering your preferences and repeat visits. By clicking “Accept All”, you consent to the use of ALL the cookies. However, you may visit "Cookie Settings" to provide a controlled consent.
Cookie SettingsAccept All
Manage consent