As many of you know I travel extensively often stumbling on lost (sacred) sites. I sometimes have the feeling that Spirits of the Land are calling me – sometimes because something is extraordinarily beautiful or sometimes because the land has been abused and polluted. On a lot of occasions though I can’t always ‘explain’ what draws me to certain locations.

In the last 6 months (September 2018- March 2019) I had two distinct ‘callings’ concerning the exploits of Aleister Crowley. I have a number of friends connected to O.T.O. / Ordo Templi Orientis although I am not a member myself. I have attended the Gnostic Mass in various countries including St. Petersburg, Russia. So I am familiar with O.T.O. ritual texts.

Whilst I was preparing a visit to the folks from PFI Portugal, Lisbon, last year, I came across an article about Fernando Pessoa, Portugal’s national poet. I had never heard of him so was curious to learn more. The article in question wasn’t so much about Pessoa but about his meeting with Aleister Crowley, in Portugal, September 1930. The article is titled: ‘De Mond van het Inferno’. (The Mouth of Hell) Authored by René Zwaap – he asked the question:

I remember reading it but also half forgot it until Isobel suggested visiting the Casa Fernando Pessoa museum in Lisbon – after the PFI Portugal lunch. She mentioned the meeting between Pessoa and Crowley … and the reason for all the controversy. Then I remembered the article. (It wasn’t until MUCH later that I noticed it was an article from De Groene Amsterdammer, dated 29 July 2009!! ) Crowley had faked his suicide at a wild and rocky place called ‘Boca do inferno’ / Mouth of the inferno, hell, on a stretch of coast near to Sintra.

At the museum there was a mention of this incident. Isobel later suggested visiting the location and she would tell me what she knew… 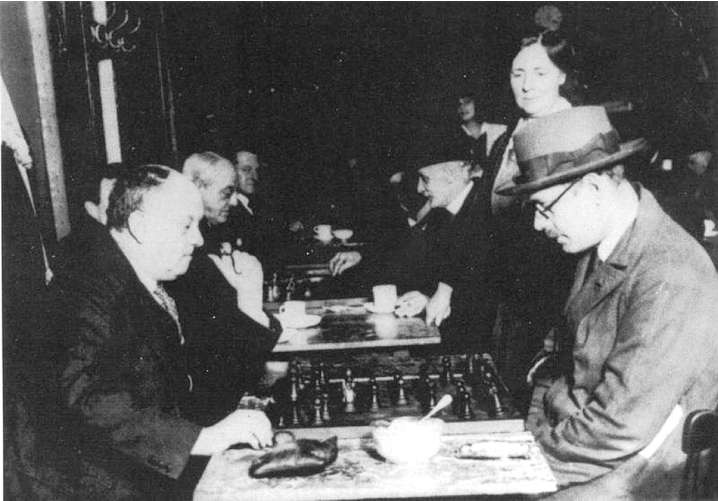 So one bright morning in late Summer we set off by train to Sintra. We met a friend and she took us by car to the infamous place ‘Boca do Inferno’.

Although it is a tourist attraction now, in the 1930’s it was pretty desolate. See other photos at the end of this article. We clambered to the main part where it looked as if there had been steps going down to the water’s edge. This is all cordoned off now as it is crumbling and dangerous to walk over.

However it was possible to see the plaque with the inscription containing the text of the ‘suicide note’. 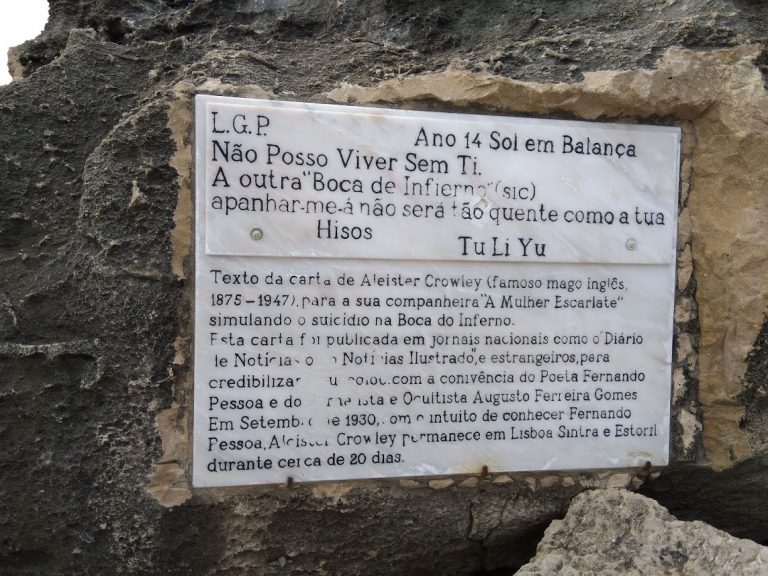 QUOTE: Today, there is a small white plaque mounted on the rock commemorating the event. It tells the story of the pseudocide and provides the text of Crowley’s suicide note: “Não Posso Viver Sem Ti. A outra ‘Boca De Infierno’ apanhar-me-á não será tão quente como a tua,” which translates roughly to “Can’t live without you. The other mouth of hell that will catch me won’t be as hot as yours.” That might be touching if any of it were genuine. UNQUOTE

For a more extensive explanation and speculations check out the Dutch article… and in English the article in The Guardian dated 20 July 2008, by John Hooper. Links below.

For the real Crowley fans Marco Pasi has done some excellent research work and has written the paper,

Abstract: Aleister Crowley’s diary for the period of his travel to Portugal and his meeting with Fernando Pessoa has long been considered lost or inaccessible. However, a copy has been finally found and is here presented and published for the first time. The analysis of the diary allows us to have a fuller knowledge of Crowley’s movements and activities while in Portugal and especially of his meetings with Fernando Pessoa. It also clarifies some aspects of the famous Boca do Inferno suicide stunt in which Pessoa was directly involved and brings some new clues concerning a possible initiation of Pessoa in one of Crowley’s magical orders. 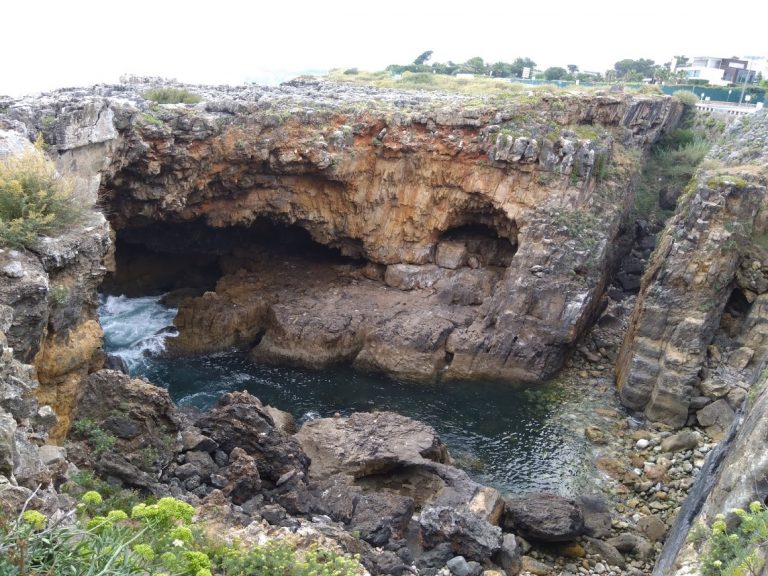 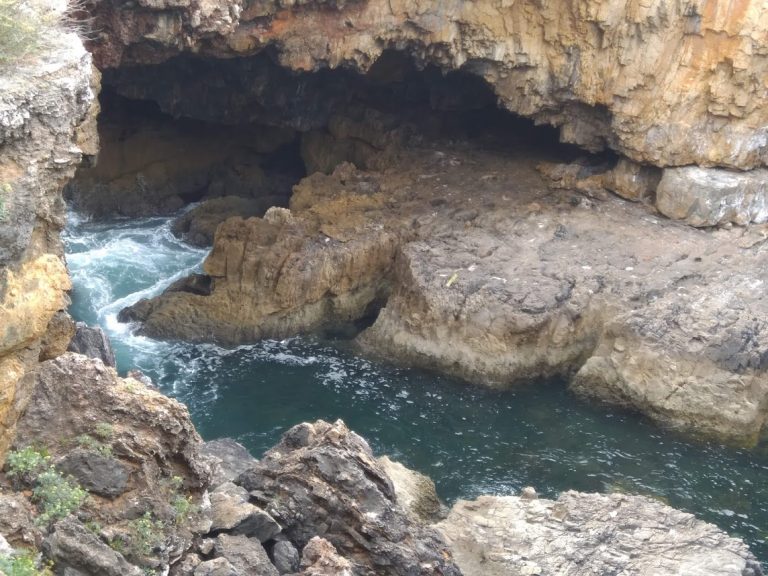 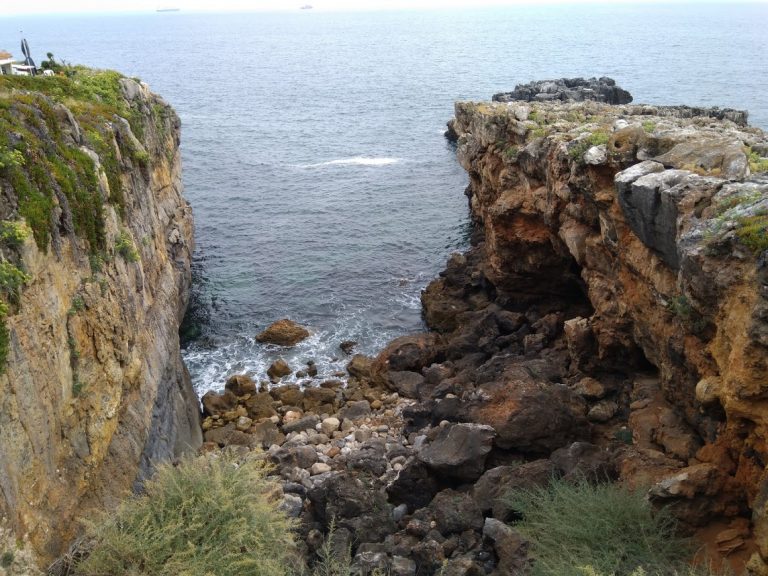 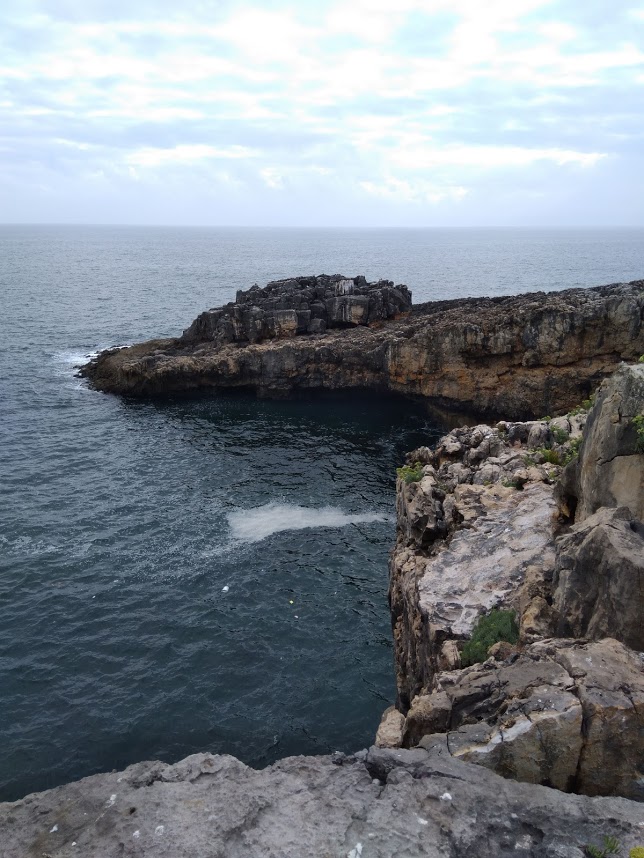 This article appeared in the Guardian, 20 July 2008, by John Hooper. How a shy poet was spellbound by the Beast. Lisbon battle to halt auction of literary treasures:
https://www.theguardian.com/books/2008/jul/20/news.poetry

Photo – ‘Aleister Crowley & Fernando Pessoa – NB: And Neil wrote: “This may be the first and last ever instance of a culture minister being distressed by evidence of Aleister Crowley’s existence being removed from their purview. The correspondence between Crowley and Pessoa started in 1929 and is probably confined to 29/30. Pessoa translated Crowley’s Hymn to Pan into Portuguese, and published it in his Presenca, in 1931. In September 1930 Crowley visited Portugal with his latest Scarlet Woman, Hanni Jaeger. The usual Crowley melodramatics followed, with Hanni dissolving into ‘a very long fit of hysterical sobbing’ and being rescued by the American consul. Fernando Pessoa then thought it amusing to aid Crowley in a fake suicide at the Boca do Inferno. There was an international furore, only resolved when Crowley appeared large as life and twice as unnatural at the opening of an exhibition of his paintings in Berlin on 11 October.”:
http://50watts.com/Aleister-Crowley-and-Fernando-Pessoa

Boca do Inferno, A unique seaside cave where Aleister Crowley faked his own death.
https://www.atlasobscura.com/places/boca-do-inferno

"Morgana is Anglo/Dutch and lives in the Netherlands. She is a practising Gardnerian HPS. Over the years, she has facilitated a variety of Wiccan groups. She is co-editor of the international and bilingual "Wiccan Rede" magazine, which was launched in 1980 and is coordinator of Silver Circle, a Wiccan network in the Netherlands. As International Coordinator for PFI she travels extensively giving talks and workshops about Wicca and Paganism."
Bekijk alle berichten van Morgana →
Dit bericht is geplaatst in English articles met de tags Aleister Crowley, Boco de Inferno, Pessoa, Portugal. Bookmark de permalink.
We use cookies on our website to give you the most relevant experience by remembering your preferences and repeat visits. By clicking “Accept All”, you consent to the use of ALL the cookies. However, you may visit "Cookie Settings" to provide a controlled consent.
Cookie SettingsAccept All
Manage consent