Having visited Boca do Inferno, near Cascais, Portugal, in September 2018 and hearing all about the ‘faked suicide’, I was quite curious to find out more about Aleister Crowley and Fernando Pessoa’s connection. There was also the question of what happened to the collection of papers being auctioned in 2009.

“The escalating controversy ended with the Portuguese Ministry of Culture obtaining the 800-page Pessoa-Crowley file (which, in addition to letters, includes an unfinished detective novel by Pessoa about the ‘disappearance’ of Crowley) for € 130,000”.

He also mentions in the above article that a number of international literary experts and academics started researching the ‘Pessoa-Crowley dossier’. Dr. Marco Pasi, (University of Amsterdam, faculty Humanities, Western Esotericism   and Hermetic Philosophy) also wrote an extremely interesting paper titled September 1930, Lisbon: Aleister Crowley’s lost diary of his Portuguese trip. The facsimiles of the diary and transcription are particularly interesting of course. In his book Aleister Crowley and the Temptation of Politics he elaborates on what he describes as, “one of the most mysterious and enigmatic episodes in Crowley’s life: his journey to Portugal to meet with Fernando Pessoa (1888–1935).” 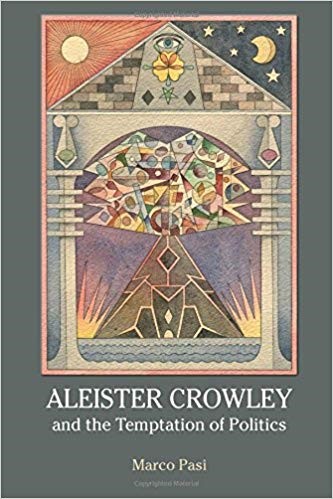 In this book Pasi also writes extensively about Crowley’s time in Cefalu, Sicily and the establishment of the ‘Abbey of Thelema’.

“His new plan was to found an ‘abbey’ in which a community of disciples could put the doctrines of Thelema into practice.

Magical and religious aspects aside, this was in fact also a social experiment. The place chosen for realizing this project was Cefalu, in Sicily, and in March 1920 the ‘Abbey of Thelema’ was established in a rented villa. The original core group of Thelemites was composed of Crowley himself, his Scarlet Woman Leah Hirsig and a French former governess, Ninette Shumway, nee Fraux (1894–1990). The experiment lasted three years, until Crowley was expelled from Italy in 1923. During this period numerous guests visited the Abbey, predominantly from England. Moments of peace and of spiritual research took turns with altercations and conflicts, and the situation at the Abbey was often less than idyllic. In late 1921 one of the recurring crises between the residents was so serious that it attracted the attention of the local police and led to an inspection of the Abbey.

In 1922 Crowley left the Abbey temporarily for a retreat in Fontainebleau. The purpose of this trip was to overcome his addiction to heroin, which he had begun using in 1919. The attempt failed, however; he would continue using the drug until his death. In May he went to London to try to gather some funds for the Abbey. He published a few articles in The English Review, a literary magazine, and managed to get a contract with a publisher to write a novel, The Diary of a Drug Fiend, in which he described his experiences with drugs (cocaine in particular) and the Abbey of Thelema. When the book was published it was immediately denounced by the Sunday Express newspaper, which accused Crowley of promoting the unrestrained consumption of drugs. Crowley also began writing his autobiography, The Confessions, but the plans for its publication did not go through because of the increasingly frequent attacks levied by the sensationalist press. The first two volumes would be published only in 1929. Crowley returned to Cefalu in October 1922, passing through Rome during the same days in which the fascists marched through the city. In February 1923 a tragic event took place at the Abbey: Raoul Loveday (1900–1923), a disciple whom Crowley had met on his last voyage to London, died, probably of enteric fever after drinking contaminated water. During Loveday’s illness, his wife, who had accompanied him to the Abbey, complained to the British consul in Palermo regarding the living conditions at the Abbey. After Loveday’s death, she returned to England and held interviews with some of the same sensationalist newspapers that had already used Crowley as material, namely John Bull and the Sunday Express. As a result, the press campaign against him became increasingly more violent. On 23 April he was expelled from Italy.”

In March 2019, I visited Sicily and remembered that the ‘Abbey of Thelema’ was in Cefalu. A few years back it had been up For Sale and it didn’t take me long to find old links about that. I also found some links to You Tube clips about people visiting the ruins in 2010 and 2011. I wasn’t sure if I would have time to go to Cefalu but it looked like an interesting place to visit even  if I couldn’t find the Abbey.

One of the links I also found was called innocuously ‘Wonders of Sicily’ but in fact contained exact details of how to get to the Abbey or Abbazia di Thélema, “Aleister Crowley and the Abbey of Thelema in Cefalù” Per-Erik Skramstad © Wonders of Sicily:

“The current state of Aleister Crowley’s Abbey of Thelema in Cefalù, a picture of his flawed experiment, seriously damaging people’s mental health. Mary Butt, one of Crowley’s recruits, pointed out, “It was one thing to partake in the rite of preparing the Cakes of Light, in which Crowley, in a scarlet-and-black robe, sacrificed a cockerel for its blood, but quite another to participate in bestiality.” Sexual magick was part of Crowley’s philosophy, culminating with one of his disciples having engaged in sexual intercourse with a goat. The goat represented the Devil.

In 1920 Aleister Crowley set up his Abbey of Thelema outside Cefalù with his mistress Leah Hirsig, who was totally dedicated to him. Crowley hoped that this was to be the beginning of his new religion. He regularly took trips to Palermo (staying at Hotel des Palmes, where Richard Wagner some 40 years before completed Parsifal) and Naples in search of drugs, supplies and prostitutes. The trips were probably also made to escape the jealous arguing of his two mistresses at Thelema, Leah and Ninette, referred to by Crowley as ‘first concubine’ and ‘second concubine’.”

On my return to Palermo from Syracuse I did make the time, so I set off early morning and went to Cefalù by train. In between times I found out that on Google maps the Abbazia di Thélema was marked! It was about a 20-minute walk from the station. What it didn’t mention was, was that it was a very steep climb. I could have guessed though because the directions went towards Rocca di Cefalù.

Following the directions on Google maps and remembering the instructions from the site ‘Wonders of Sicily’ I headed for the Football Stadium/Stadio Communale S. Barbara. The villa which Crowley bought was called Villa S. Barbara… and there was still a signpost leading from the main road to the villa!

I got to the ‘final destination’ according to Google maps … I was standing in the stadium car park… so… where was it?? On closer inspection I saw a couple of roof tiles amidst a veritable jungle. I walked a bit closer and sure enough … a roof! 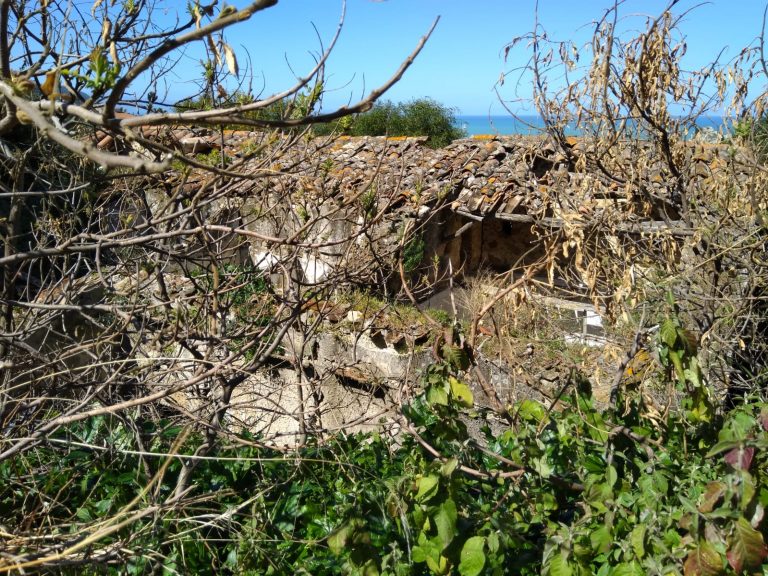 To the right of the ruin… believe me it is a ruin … I also found a path leading down. It too was completely overgrown. 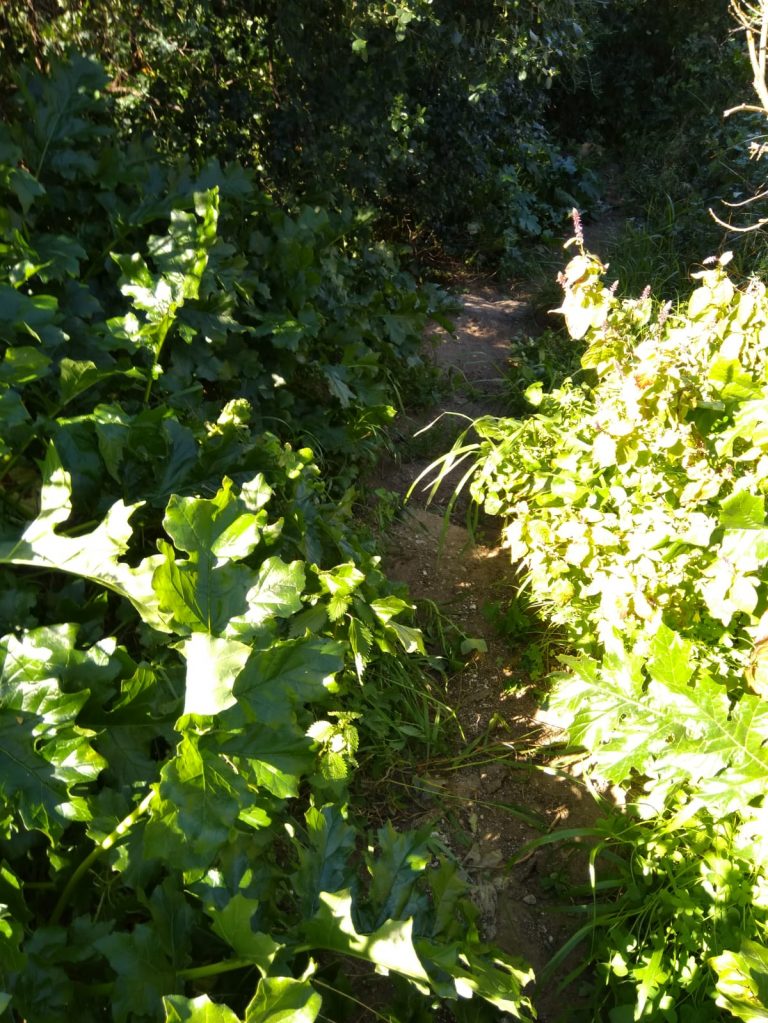 I tried walking down but after a meter I decided to scramble back. (Those who know me also know that I am not very good at climbing). 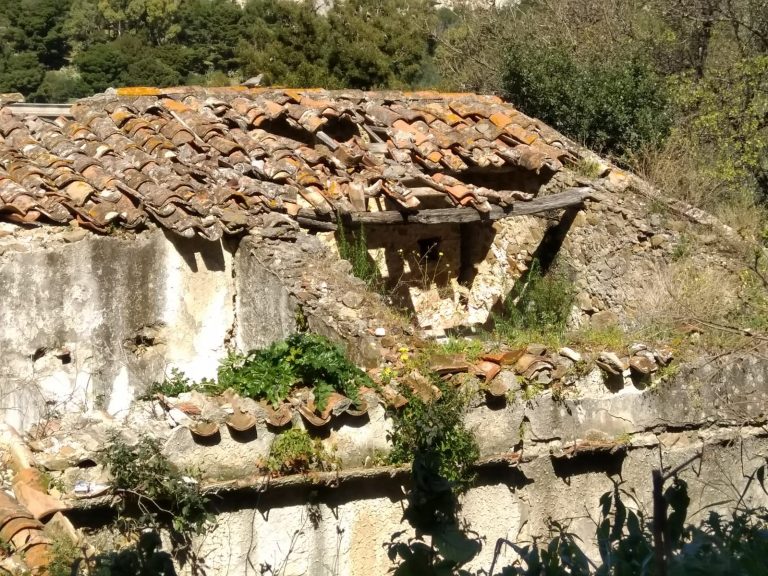 I tried looking down to see if there was another way … also going round to the left of the house.
But there was no way I could get round.

A lot I recognised from the video clips but 8-9 years later and the roof really looks very dangerous. So even if I could have gotten down, I think it was just too dangerous to go in. It is not clear who the present owner is.

Before I went a friend asked me to note the energy of the place. Honestly? I felt nothing, except the ‘normal’ feeling of Spring! Having read some accounts of what went on there, I almost felt a relief. Nature seems to have reclaimed it and is gradually burying it from sight. I quietly thanked the gods and bathed in the sun for a while before heading back to the centre of Cefalu. 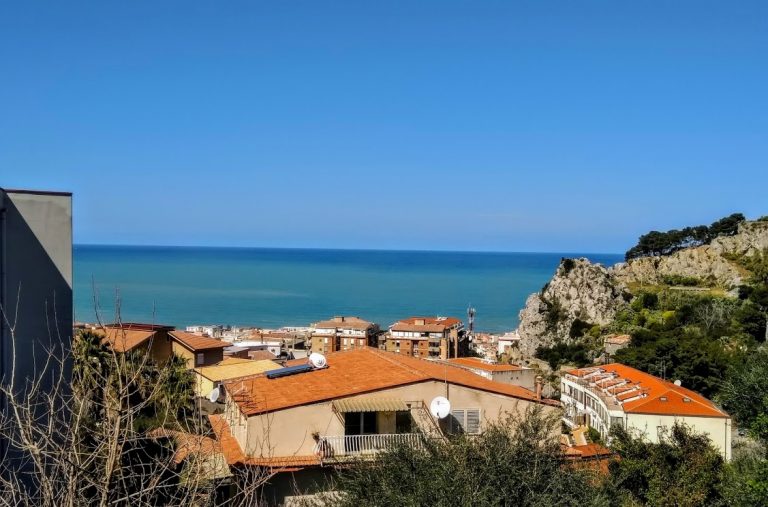 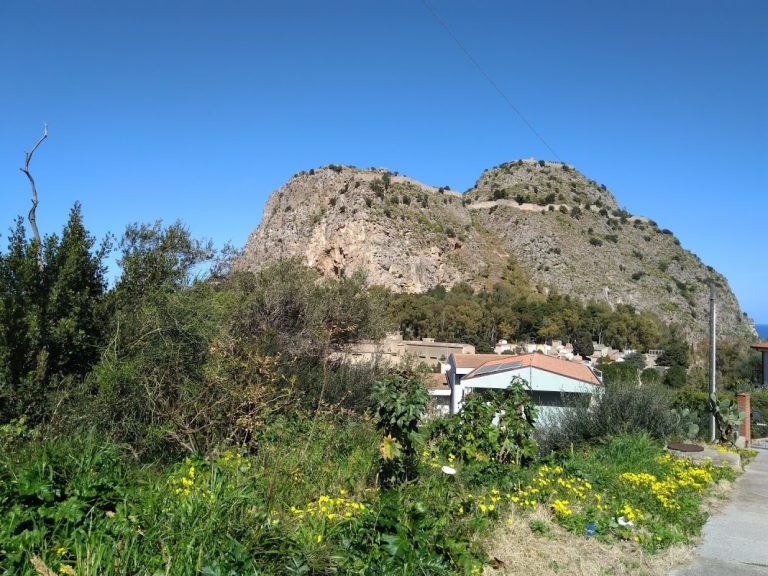 The views looking out to sea and up towards the Rocca were amazing though. If nothing else the stiff climb had been well worth it!

I am still not sure why I was drawn to ‘The Mouth of Hell and the Abbey of Thelema’ but it has given me more of a ‘hands-on’ experience of Aleister Crowley and in a strange way increased my wonder of, and the power, of nature. Above all it reminded me that Nature doesn’t need us… but we certainly need Nature.

“ Aleister Crowley (1875-1947) is one of the most famous and significant authors in the history of western esotericism. Crowley has been long ignored by scholars of religion whilst the stories of magical and sexual practice which circulate about him continue to attract popular interest. “Aleister Crowley and the Temptation of Politics” looks at the man behind the myth – by setting him firmly within the politics of his time – and the development of his ideas through his extensive and extraordinarily varied writings. Crowley was a rationalist, sympathetic to the values of the Enlightenment, but also a romantic and a reactionary. His search for an alternative way to express his religious feelings led him to elaborate his own vision of social and political change. Crowley’s complex politics led to his involvement with many key individuals, organisations and groups of his day – the secret service of various countries, the German Nazi party, Russian political activists, journalists and politicians of various persuasions, as well as other writers – both in Europe and America. Aleister Crowley and the Temptation of Politics presents a life of ideas, an examination of a man shaped by and shaping the politics of his times.”

ImpostorsTV Published on 3 Oct 2011:  The Abbey of Thelema was the small house which was used as a temple and spiritual centre founded by Aleister Crowley and Leah Hirsig in Cefalù, Sicily in 1920. Mussolini’s Fascist government expelled Crowley from Italy at the end of April 1923. The Impostors decided to visit this historical place of interest whilst in Sicily and produced this short film.

“Aleister Crowley and the Abbey of Thelema in Cefalù”:
http://www.wondersofsicily.com/cefalu-aleister-crowley-abbey-thelema.htm.

"Morgana is Anglo/Dutch and lives in the Netherlands. She is a practising Gardnerian HPS. Over the years, she has facilitated a variety of Wiccan groups. She is co-editor of the international and bilingual "Wiccan Rede" magazine, which was launched in 1980 and is coordinator of Silver Circle, a Wiccan network in the Netherlands. As International Coordinator for PFI she travels extensively giving talks and workshops about Wicca and Paganism."
Bekijk alle berichten van Morgana →
Dit bericht is geplaatst in English articles met de tags Abbey of Thelema, Aleister Crowley, Cefalu, Sicily. Bookmark de permalink.