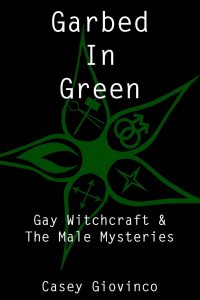 Available in Kindle and Paperback.

In Garbed in Green, Casey takes us to his approach to Male Mysteries, a field where few have ventured — and none (according to this reviewer’s point of view) have succeeded. The why to his last, will be evidenced later on in the review.

The book begins offering a personal background on the author, on a very deep level; which enables the reader to understand the direction of the book. The following chapters, as the author himself specifies, start the path towards Gay Male Mysteries, from a high level — passing through noteworthy roles of homosexuality and the sacred in ancient history to key events in recent ‘Gay History’.

From the Sumerian gala priests and the Phoenician kelev, to the renown Native American Two Spirits, Casey explores the key role of homosexual or queer priesthood (or ‘sacred personhood’) throughout the foundation of our culture.

At this point the author starts using the myth of Diana and Lucifer (as portrayed in Leland’s Gospel of the Witches) as a center pillar or prime example for the interaction fo polarity, which will become a centre piece of the following argumentation and ‘drilling into’ the Male Mysteries —strongly supported by Jean Baudrillard’s views on his work Seduction (New World Perspectives, 1990):

‘One can hypothesize that the feminine is the only sex, and the masculine only exists by a superhuman effort to leave [the feminine]. A moment’s distraction and the masculine falls back into the feminine’. [End of Baudrillard’s quote] We can see this in the Aradia Myth. Lucifer fights so hard for his independence, and the moment he takes rest and falls back on his comfortability, Diana reclaims what was taken from her. This is the secret that any man who wishes to explore the Male Mysteries must fully reconcile for himself.

While there is a further caveat of this being mainly applicable to heterosexual men, and while this reviewer does not dispute that fear of oblivion might have a role in the entire development of patriarchy, this piece disrupts the argument flow in the book due to two different points:

Both of the above risk sending the reader into a guilt-trip where, as Lucifer, the source of all their problems is their inability to face and accept the irrevocable fate of disappearing into the feminine. In a book that aims to mainly address a gay readership, this is a mood-breaker.

This brings me back to the beginning of the review, where I mentioned the challenge of talking about Male Mysteries.

I have seen many people attempting to talk about Male Mysteries. All of them making the same mistakes, which results in this reviewer developing three main points (or flaws, or mistakes) that a conversation on Male Mysteries has to avoid in order it to be considered valid:

Of the above, the last one is probably the one that slips more frequently — it is way too easy to explain or explore Male figure through the female one. A majority of the myths and principles touch upon the interaction between the two; leaving little or nothing to the exploration of them individually.

However, a reviewers opinion is that every exploration of mysteries of a gender, or the identity of a group or culture, should start from and remain within itself. In other words, one should acts as if nothing else and nothing beyond that group existed. While a bit far off the topic, I believe this is explained beautifully by the following quote:

When a group’s voices have been silenced for decades or centuries, having a safe place that is only for the members of that group can be an essential step in helping members of that group claim the voices that have never been allowed to speak. It’s then easier for those voices to speak in the broader community. So I hear this… more as sanctuary than segregation and can see it contributing to the day when … voices are invited and valued equally.
— Rev. Charles Gibbs

Although the above mainly addresses social minorities and discriminated groups, and might seem as a bit of an irony to use them in the context of a conversation about males, it does portray the need for any empowerment and inner exploration journey to begin within itself.

Only once this initial healing has taken place, can the group reconnect. Only once the male, or gay male, has healed and unveiled the axis stone that defines himself, can he start explore how does that interact with others (i.e. females).

Moving forward from the above, Casey offers the first towards creating (or even recovering) spiritual tools (whether on myth or mythology) to help in the quest towards that Male (Gay) Mystery quest. While a few of them are again female focused-dependent (i.e. Cybele and Dionysus), he does offer an invaluable cross-culture, all-up, start point for gay males to start exploring, and re-exploring, both common and not so common myths.

In the second half of the book, Casey offers a cohesive and practical set of exercises, instructions, and rituals, to begin the journey towards Gay Male Mysteries and Gay Witchcraft, borrowing from different cultures (with emphasis on the Greek), and setting a framework for any solo practitioner to start working on his own. He also provides extensive follow-up resources (that I will list below).

I started this review by clearly emphasising the daring and challenging nature of Casey’s quest with this book. This was no random comment. In spite of my comment above, Garbed in Green remains and excellent prime in the collective quest towards unveiling Male (and specially Gay) Mysteries. Not only does it tackles numerous key points over which one should ponder, but it also provides several start points to further drill into.

After my first reading of the book I also reached out to Casey to provide my feedback, which resulted in a very constructive follow-up conversation. This evidenced that, first, we did agree on a number of points, and my mixed feelings about some points might also have been due to editing. Second, that Casey’s quest is a work-in-progress, and that this book should certainly be the first of a series as he goes forward.

For all that, the book is a must-have for anyone wishing to embark into the exploration of Gay Male Mysteries — specially those with interest in witchcraft and the occult!

Resources (mentioned in the book):

Casey Giovinco is Chief Elder of Gala Witchcraft, which combines traditional coven-based, initiatory Wicca with the central goal of reawakening the Gay Mysteries. In addition to his work with Gala, Casey works with clients in a variety of modalities applying metaphysical principles he learned through his Wiccan clergy training to improve the quality of their lives. He is an RYT 200 yoga teacher, and he holds certifications in strategic organisational leadership from Villanova University; hypnosis from the National Guild of Hypnotists; and life, executive, and relationships coaching from The Coach Training Alliance.

A Gardnerian witch from the Basque Country, still figuring out things, most of them. I am also webmaster for the AdRosam site, a website of resources in Spanish for Gardnerian Seekers. I am also on Twitter and Tumblr.
Bekijk alle berichten van Alder →
Dit bericht is geplaatst in Boeken, English articles met de tags gay, male mysteries. Bookmark de permalink.
We use cookies on our website to give you the most relevant experience by remembering your preferences and repeat visits. By clicking “Accept All”, you consent to the use of ALL the cookies. However, you may visit "Cookie Settings" to provide a controlled consent.
Cookie SettingsAccept All
Manage consent