Review: The Seven Names of Lamaštu 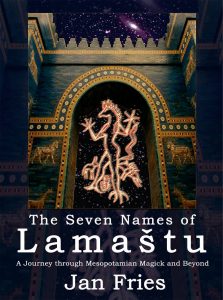 The cover of this book depicts the Ishtar Gate which was constructed by the Babylonian King Nebuchadnezzar II. It was this processional way that led to the temple of Marduk. I remember visits to the British Museum in London, the Pergamon Museum in Berlin, The Archaeological Museum in Istanbul and a couple more, where I would suddenly be hit by flashbacks of visions of Sumeria and Mesopotamia. From Ur and Uruk to Nineveh and Harran I would pick up bits of memories, and visions – inspirations of Inanna, Ishtar, Sin and Shamash.

Sorita, from Avalonia Books, knew of course of my interests in the Fertile Crescent. My journeys had led me to Anatolia and Hekate and we had had numerous conversations about The Lost Kingdoms. She excitedly showed me this new book – The Seven Names of Lamaštu  – and her own ‘adventures’ in publishing it. As if some spirits were having fun, changing names in the manuscript to the published version, without any logical explanations. But here it was! And what a tome.

On the back flap we read:

“The Seven Names of Lamaštu is an exploration of the religions and mysteries of the cradle of civilisation, Mesopotamia by Jan Fries, author of Kālī Kaula and Dragon Bones. The Sumerians developed the first functional script (3500-3200 BC), the priests wrote god lists, dictionaries, catalogues, recorded spells, myth and poetry – and committed the first known medical prescriptions and rituals into writing. In the centre of their faith lurks the lustful animal-headed goddess DIM.ME/Lamaštu, exiled from Heaven for her forbidden desires and charged by the council of Gods with a fearsome task: to cull the vulnerable and keep the human population within manageable limits. For all but a few, her name conjured terror in the hearts of Mesopotamians.

Jan Fries seeks to redress the balance, by showing that this rebellious goddess, so demonized by superstitious folk and modern academics, is an essential expression of the divine. Lamaštu’s numerous, but rarely discussed, positive attributes bring her into focus. She is a victorious goddess, who listens to prayers, haunts both swamps and the mountain forests she loves, banishes lethal spirits, helps with the birth of wild animals and adopts stray piglets and puppies. She is a sacred woman, a priestess and a midwife to her brothers, the gods.

This is a modern translation of the famous Lamaštu Series, with commentary, which can be used as a dictionary and travel companion through the earliest form of religion and sorcery. It is a journey that takes us through the rise and fall of empires, the changing status of women, Sacred Marriage, everyday rituals, sacrifice, divination, ritual training, conjuration, banishment, vengeful magic, spells and counterspells, dream-magic, the dawn of science, medicine and ritual music – with teachings on how to build your own civilisation using only rivers, reeds and clay. …

The book concludes with the mysteries, meditations and practical rituals of Siṁhamukhā, the Lion-headed Goddess of Hindu and Buddhist Tantra, and a set of innovative, syncretistic meditations and trances based on the Seven Names of Lamaštu.

Child of Heaven.
Watchful One of the Gods of the Streets.
Decapitator.
Fire-Starter.
Wild-Countenance.
Trusted.
Oathbound, Free to Fly.

Divided into these 7 sections this is truly A journey through Mesopotamian Magick and Beyond. In many ways this is complementary – and even a compensation for the physical journey to a region which is still too dangerous to traverse. One wonders if the demonization and misunderstanding of Lamaštu (and other deities) hasn’t contributed to the situation in today’s Near & Middle East? My own workings with Inanna & Hekate have certainly made me realise that we do need to go back to original sources and to at least try to connect with those currents and understand the effects today.

Don’t be put off by the enormity of this work! Take it bit by bit, use the illustrations Jan has provided for meditation. Make copies and colour them in, whilst contemplating the symbolism 😊

Complete with an extensive bibliography including the reference to Walter Farber’s Lamaštu. An Edition of the Canonical Series of Lamaštu Incantations and Rituals and Related Texts from the Second and First Millennia b.c./ Mesopotamian Civilizations 17. Winona Lake, Indiana: Eisenbrauns, 2014. Pp. xiv + 380 + 91 plates, this book is the handbook for anyone interested in Mesopotamia, the land between the two rivers…

And well done Sorita for getting this published!

"Morgana is Anglo/Dutch and lives in the Netherlands. She is a practising Gardnerian HPS. Over the years, she has facilitated a variety of Wiccan groups. She is co-editor of the international and bilingual "Wiccan Rede" magazine, which was launched in 1980 and is coordinator of Silver Circle, a Wiccan network in the Netherlands. As International Coordinator for PFI she travels extensively giving talks and workshops about Wicca and Paganism."
Bekijk alle berichten van Morgana →
Dit bericht is geplaatst in Boeken, English articles, Recensies met de tags Lamaštu, Magick, Mesopotamia, Sumeria. Bookmark de permalink.
We use cookies on our website to give you the most relevant experience by remembering your preferences and repeat visits. By clicking “Accept All”, you consent to the use of ALL the cookies. However, you may visit "Cookie Settings" to provide a controlled consent.
Cookie SettingsAccept All
Manage consent