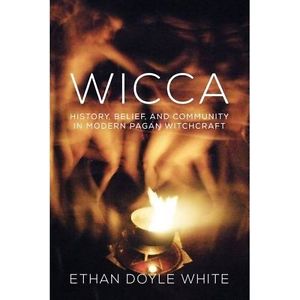 On the back cover, we read “The past century has borne witness to a growing interest in the belief systems of ancient Europe, with an array of contemporary Pagan groups claiming to revive these old ways for the needs of the modern world. By far the largest and best known of these Paganisms has been Wicca, a new religious movement that can now count hundreds of thousands of adherents worldwide. Emerging from the occult milieu of mid twentieth-century Britain, Wicca was first presented as the survival of an ancient pre-Christian Witch-Cult, whose participants assembled in covens to venerate their Horned God and Mother Goddess, to celebrate seasonal festivities, and to cast spells by the light of the full moon. Spreading to North America, where it diversified under the impact of environmentalism, feminism, and the 1960s counter-culture, Wicca came to be presented as a Goddess-centred nature religion, in which form it was popularised by a number of best-selling authors and fictional television shows. Today, Wicca is a maturing religious movement replete with its own distinct world-view, unique culture, and internal divisions. This book represents the first published academic introduction to be exclusively devoted to this fascinating faith, exploring how this Witches Craft developed, what its participants believe and practice, and what the Wiccan community actually looks like. In doing so it sweeps away widely-held misconceptions and offers a comprehensive overview of this religion in all of its varied forms. Drawing upon the work of historians, anthropologists, sociologists, and scholars of religious studies, as well as the writings of Wiccans themselves, it provides an original synthesis that will be invaluable for anyone seeking to learn about the blossoming religion of modern Pagan Witchcraft.”

Divided into three parts Doyle White briefly covers Wiccan History from the origins to the present day. Notable authors and practitioners such as Gerald Gardner and Alex Sanders are discussed as well as the impact of the social movements such as the Gay and Women’s Liberation movements. In part 2 Beliefs and Praxes looks at Wiccan theology, ritual practice and Rites of Passage and so on. In the final part Wiccan Life, the Wiccan community and culture is discussed. Particular attention is given to the Study of Wicca within academia and the problems recently raised concerning the subject of Pagan Studies. All in all, a good primer for scholars who are not familiar with the phenomenon “Wicca”.

It occurred to me however whilst reading the book, that this it is rather like analyzing Christianity 70 years on… The majority of early Wiccans have now passed on and the new “Old Guard” – like me – are frantically trying to note down first-hand experiences and our own Craft history.  And that is perhaps where I think Doyle White could have spent more time. On field research in his own back garden. I was more than surprised to see Wicca “in Europe” dealt with in less than a page. And unfortunately not accurately either:

“In the Netherlands, Gardnerian Wicca gained a foothold in the 1970’s when Merlin Sythone (sic) and his wife Morgana founded the Silver Circle coven in Zeist, followed by the arrival of the Alexandrian tradition in the following decade.” **

That he then claims that Wicca “fundamentally remains an Anglo-American movement” is to completely negate the influence of “the continent”, as our British friends call us, and underlies the still prevalent American/British cultural imperialist attitudes. That many neo-pagan rituals are influenced by Wicca practice and structure is certainly the case. So much so that it has given rise to the words Wiccanesque, Wiccanish, Wiccanate and would seem to indicate that it has a much more universal impact than one would imagine. Wicca as a philosophy has the ability to absorb many different cultural aspects which perhaps makes it difficult to define.

Despite this shortcoming – how about part 2? – this is a valiant attempt at covering “Wicca – a modern religion in an old robe” which was the title I gave to a paper I read at a recent conference. I do realise how difficult it is to give an accurate picture since the diversity of opinions amongst Wiccans is enormous. In 1979 when Margot Adler wrote “Drawing down the Moon” it was already clear that neo-paganism, Wicca, and so on was going to be something quite different than the Abrahamic religions.

** Note; The name is Sythove; Silver Circle is the name of a centre, not a coven… and I don’t think the Alexandrians would like to be known as “following” the Gardnerians.

He has written a number of interesting papers. Follow him here on Academia.

He writes on his blog: “Born, raised, and still residing in the urban sprawl of Greater London, I am a PhD candidate at University College London with a particular interest in the development of cult, ritual, and magic. My published research focuses around two key-themes: pre-Christian religion in Europe, and the reception, re-interpretation and re-use of pre-Christian Europe in a modern context (i.e. contemporary Paganism). Although I have been academically trained in the discipline of archaeology, I am a staunch supporter of interdisciplinary perspectives, and my research has closely intersected with religious studies, history, and folkloristics. I have a forthcoming academic book, have published nine articles in peer-reviewed academic journals, and have also published twenty-four book and exhibit reviews in six different journals. I am happy to be contacted at ethan-doyle-white@hotmail.co.uk”.

"Morgana is Anglo/Dutch and lives in the Netherlands. She is a practising Gardnerian HPS. Over the years, she has facilitated a variety of Wiccan groups. She is co-editor of the international and bilingual "Wiccan Rede" magazine, which was launched in 1980 and is coordinator of Silver Circle, a Wiccan network in the Netherlands. As International Coordinator for PFI she travels extensively giving talks and workshops about Wicca and Paganism."
Bekijk alle berichten van Morgana →
Dit bericht is geplaatst in Boeken, English articles, Recensies met de tags history, modern witchcraft, paganism, Wicca. Bookmark de permalink.