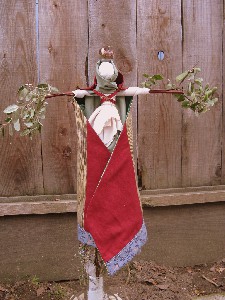 As we get closer to the high point of the winter, in the Craft we celebrate the return and rebirth of the Light and the first visible signs of Life with the festival of February Eve (a.k.a. Candlemass, Imbolg/c). In many countries of the European continent and Isles, this time of the year is much related with the Irish Goddess Brigid, even in its modern form of St. Brigid. However, in the Basque Country (and even though St. Brigid is present as well) the attention is focused on Saint Agathe, patroness of the Basque Country.

One of the most common mistakes of researchers and anthropologist when looking into the Basque folklore trying to find ‘ancient’ and ‘time old’ practices, is that they fail to understand the intrinsic integration of rural practices with modern Christian ones. Therefore, practices, celebrations or even people who were nominally Christian, had a much deeper background than it was apparent at first sight.

One example of this is to be found in the custom that a new born child who had not been baptised could only be brought out of the family household (‘baserri’[i]) with a tile of the roof on top of him. If the child died, he would be buried under the eaves of the roof. This shows a clear and smooth integration between the christening as a protection and the household as a safe place (I also talk about this in the last part of my previous article on the Basque Mythology).

At this point, it is interesting to note that the main researches and anthropologist, responsible for most of the information we have about Basque mythology and ethnography, were Catholic priests.

It is then necessary to look deeper into the (nominally Christian) main festivals and customs, if we want to understand the ancient beliefs of this culture.

As I mentioned before, even though St. Brigid and Candlemass are present in the Basque Country (the first as ‘Santa Brígida’ and the former as ‘Candelaria’, related to the ‘Virgen de la Candelaria’) due to the influence of the Spanish church, the most popular festival, honours St. Agatha.

Agatha of Sicily was born in Catania in 231 A.D., and she’s best known through the hagiographic literature which tell us about how she was tortured, the most atrocious one being the cutting off of her breasts.

The saint then became the patroness of women, ailments related to the breasts, matrons, and the like.

While there are several theories about how this celebration may have arrived to the north of the Iberian Peninsula (apart from an obvious Christian influence), the renowned Basque folklorist Julio Caro Baroja points out in his ‘El Carnaval’ that the most tangible records of such practices in the past are the Roman Matronalia, celebrated during the Kalendae of March. Researcher Jose Manuel Fraile Gil makes reference to Baroja’s theory:

‘It seems that the Matronalia were born as a commemoration of the Sabine Women’s intervention –after their rape- in the conflagration by Sabine and Roman men; it seems that the date of that intervention was, incidentally, the kalendae of March. Moreover, the kalendae were the days of the month dedicated to Juno, head of the female Roman pantheon.’

‘The Matronalia were festivities aimed towards women: married women were given special attention by their husbands, while slaves would find a little break in their daily errands.’

Amongst Saint Agatha’s attributes, we also find that she grants protection during birth and ensures a good flow of breast milk, she ‘protects against fires and volcanic eruptions’, as well as more general gifts like ‘protection against evil spirits, cattle sicknesses and the ability of strengthening the agricultural production.’

‘Those attributes were similar to the ones of the Bona Dea, Good Fortune or ‘Agathe Tyche’ of the classic era. In the Basque Country she also has a healing aspect: that of healing migraines and headaches; and the saint, accused of witchcraft during her process, acts as a sorgiña[ii] – with the form of a cat – in several Basque legends. This aspect also recalls the hypothesis of witchcraft as a cult to Diana, also a virgin, and protector of birth and fertility.’

Many of these attributes seem to also relate Saint Agatha with the Goddess Brigid. And, even though the celebrations of St. Brigid and Candlemass have not permeated as much as Saint Agatha’s in today’s practices, the three of them form a tandem around the symbolism of the light and fire purification.

One of the most remarkable customs of this festival is the singing performed during St. Agatha’s Eve. Groups of men dressed in traditional clothes would go around the ‘baserris’ singing at the rhythm of their wooden sticks, asking for a donation. In some areas it would be composed of a dozen eggs, chorizo and a four-pound loaf of bread for each ‘baserri’.

At the rhythm of their stick, they would start singing with the following verse:

Later in time, it became common for men to sing in groups and ask for some tips before going to the military services.

Nowadays, it is common to see mixed groups going around cities and towns and getting some free drinks from local bars and restaurant.

The singing is many times followed by candle and lanterns, which many children make in schools around that date.

Here is a video of a choir singing:

When we look at this tradition, one cannot help but remember the ceremony of wassailing the apple trees in Sussex.

During the old Twelve Days of Christmas, the ‘worslers’ or ‘howling boys’ would go to an apple orchard, stand in circle round a tree, and rap the tree while singing a traditional song.

Once the whole orchard was given the same treatment, they would to the owner’s house and drink a wassail bowl of ale, sugar, nutmeg and roasted apples (also known as ‘Lamb’s Wool’).

While this custom, standing alone, differs considerably from the Basque one, I am inclined to see a connection – especially when looking at other similarities (May Pole, Merry Dancers) present in both areas.

This is, however, a mere and very personal conclusion.

Light and candles before the Carnival

Most of what has been written about Saint Agatha is intrinsically connected with the Basque Carnival, also known as ‘Ihauteriak’ in the Basque Country.

‘In other areas, matrons take on masculine roles and initiatives during her [St. Agatha’s] festivities; fertility and the switching of roles being typical features of Carnival.’

Anthropologist, ethnographer and historian (also Scholar of Honour by the Royal Academy of Basque Language), in his ‘Euskal Herria, esentziak’ also notes this correlation:

‘At the winter solstice, all the celebrations relating to fire and the water of life (olentzaro urtetsak) are incorporated into Christmas and New Year’s Eve.

There are other later celebrations which express the same theme, such as Candelaria, a purification by fire and St. Ageda.

At the end of the winter, there is the rich and varied carnival celebration, called Ihauteri, or Aratuste, which reveals an ancient symbolic world related to the foundation myths and atonement rituals’

It doesn’t come as a surprise then that most of the research about St. Agatha is found in articles related to the Basque Carnival. However, the former is a topic that deserves a separate article.

Suffice it to note that there is a clear connection between the tandem that we mentioned above and the Carnival, creating a frame of time focused on fire purification, the return of light, followed by the casting out of evil spirits in Carnival and with its culmination in May Eve.

With candle and fire, songs and sticks, the Basque people call upon the healing power of Saint Agatha and wake up the sleeping earth!

[i] Baserri is the name given to a very particular ‘family house’ in the Basque Country. See: http://en.wikipedia.org/wiki/Baserri

[ii] sorgiña is the Basque Word for witch

A Gardnerian witch from the Basque Country, still figuring out things, most of them. I am also webmaster for the AdRosam site, a website of resources in Spanish for Gardnerian Seekers. I am also on Twitter and Tumblr.
Bekijk alle berichten van Alder →
Dit bericht is geplaatst in English articles met de tags Basque, festivals, folklore, mythology, paganism. Bookmark de permalink.
We use cookies on our website to give you the most relevant experience by remembering your preferences and repeat visits. By clicking “Accept All”, you consent to the use of ALL the cookies. However, you may visit "Cookie Settings" to provide a controlled consent.
Cookie SettingsAccept All
Manage consent