The Underworld in the Basque Mythology 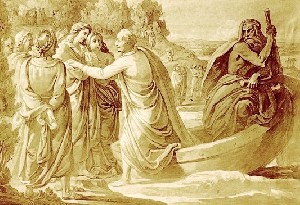 From the Babylonian Irkalla, to the Aztec Mictlan and the Korean Ji-Ok, the concept of the Underworld is to be found in many (if not most) of the cultures and their myths. Sometimes a place for pain, suffering and flames like the Fields of Punishment, others a place of beauty and bright fields, like the Asphodel Meadows; but most of the times a place related with the departed souls and the afterlife. Together with the Isles and Heavens they have been the main places of rest for the dead.

In Greek Mythology the Underworld is divided in the above-mentioned sections: the Field of Punishment, the Fields of Asphodel, the Elysium and the Isles of the Blessed. All of them, despite their differences, host the souls of the departed ones.

Comparative mythology gathers these realms and the deities related to them under the term chthonic (from the Greek khthonios ‘under the earth’).

The Basque Country: a chthonic mythology

One of the main characteristics of the Basque mythology is that its chthonic character extends to the whole of it, in one way or another.

Though very much fragmented, the mythology is much more earth-related than the one of their Celtic neighbours. Even the few astral deities[1] are somehow related to the Underworld.

The academic publication started in 1922 by the notorious Basque folklorist Jose Miguel Barandiaran, mentions this:

‘It is also believed that there are vast regions inside the earth, where rivers of milk flow; but they are unreachable for men as long as they live on the surface. These regions are communicated with certain wells, pits and caves, like the well of Urbion, the pits of Okina and Albi, and the caves of Amboto, Muru and Txindoki. From such underground conduits come different weather events, mainly stormy clouds and strong winds’

In this quote we find several clues about the significance of the Underworld in the Basque Mythology.

It is not accessible for the living, but there are different entrances (or rather exits) that connect it with the surface. We find a similar situation in the Greek mythology, in which the heroes that wanted to make their way in had to use a variety of tricks or bribes.

Though, as many other aspects in the Basque mythology and even culture, in this case, there is no way around.

These exits are also the way out for extreme weather events but also for other astral events:

‘…the Sun itself couldn’t reach the limits of the world when, at the end of its daily journey, it would reach the western seas (or vermilion seas) where it would enter into the depths of its mother Earth, from which it had departed in the morning, from its Eastern side.

The traveller who travelled around the world with a cockerel, whose crowing announced the dawn, didn’t go farther than the country in which the men, beating the crags with their clubs, would get the Sun to set off every morning (tale from Ataun)’.

These ‘men’ who beat the crags to get the sun to come out of the depths of the Earth would most likely be the Jentilak or Gentiles: the humanoid giants who are believe to have inhabited the Basque country before modern humans. 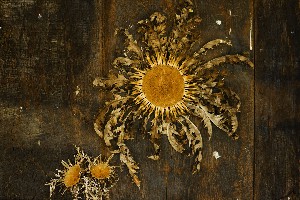 Eguzkilorea, by Garuna bor-bor
Given to the Basque people by Mari to protect them from Gaueko (the Night) after she gave them Ilargi (the Moon).

Then again, the Earth is not just a receptacle or a place, it’s a being with a name: Amaiur (lit. Mother Earth, ama = mother / lur = earth). She’s mother to both the Sun and the Moon, and each day or night they would both come out of her and return inside her.

This close connection with the Earth also extends throughout the entire Basque culture. In some myths we can see references to the ‘Old Golden Age’ (similar to the ‘Merry England’) when ‘the wolf and the sheep walked together as friends’ and ‘the trees would walk by themselves down the mountain to the houses to be burned’[2].

In some tales there’s also a part of the Underworld that resembles the Christian concept of Hell — a place of damnation and suffering. However, this may just be a later addition, after all, there was a smooth and seamless integration of Christianity and the Basque culture.

Pits and caves: home of numina

While there are several characters that may be represented as what we now call deities, the Basque mythology is based on numina, that is, divine or magical powers which are closer to the concept of archetypes and deities — clouds, storm, fire, guardian of the forest, the witch, the death, the night, the sun.

As we have mentioned earlier, most of them are related to the earth, even the astral ones.

Mari is one of those ‘deities’, though in some tales she’s depicted as a highborn lady, in others as Lamiae, and in many other forms. Nevertheless, she’s the closest thing that the Basque mythology would have to an all-powerful ‘Goddess’, the Lady — Queen of All Beings.

She is said to live in three caves from different locations during the year. When she moves from one to another, the weather changes.

When big black clouds arise from behind Mt. Ataun, people say that it’s Mari moving to another of her dwellings. That is the reason why she is many times depicted riding a cloud.

Here we can see a correlation with the myth of different weather events coming from the earth. Also, the connection between Mari and the cave is quite significant if we remember that some caves and pits were believed to be exits from the Underworld.

In that sense, it seems that the concept of the Underworld as source of the magical beings and phenomena is quite clear. The caves and pits being the liminal points where humans encounter those beings. 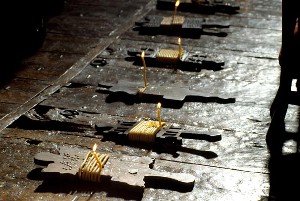 Argizaiola – Lighted inside the churches (behind the benches) to honour the dead. Some belong to a specific family and are inherited.

We can now see why in the beginning I described the Basque mythology as a ‘chthonic’ one. This character goes beyond the myths and has its roots in the mountainous landscape of the Basque country and the livestock and nuts as its main source of food.

The house[3], the land, the Lady of the House, the veneration of the death and the cattle, are pivotal points of the Basque culture.

Therefore, the Earth becomes the bigger ‘home’ that brings sustenance to the people, and its Underworld, the mythical place, source of all mythical beings and the creation itself.

[1] Astral deities are those related with the heavens and the skies.
[2] The tale says that this used to happen until a woman got tangled up with some trees that were walking down the mountain and shouted that ‘it would have been better if they didn’t come’. And they never did again.
[3] The typical Basque house is called ‘baserri’, a big family house where both the cattle and the family would live. This houses are normally spread around the mountains rather than collectively or in towns.

A Gardnerian witch from the Basque Country, still figuring out things, most of them. I am also webmaster for the AdRosam site, a website of resources in Spanish for Gardnerian Seekers. I am also on Twitter and Tumblr.
Bekijk alle berichten van Alder →
Dit bericht is geplaatst in English articles met de tags Basque mythology, underworld. Bookmark de permalink.
We use cookies on our website to give you the most relevant experience by remembering your preferences and repeat visits. By clicking “Accept All”, you consent to the use of ALL the cookies. However, you may visit "Cookie Settings" to provide a controlled consent.
Cookie SettingsAccept All
Manage consent