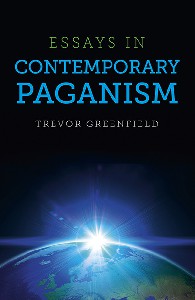 Twelve Pagan writers from across the globe wrote an essay about a contemporary theme. Varying from parenting to polytheism, from mysticism to the internet, and from being a Pagan in urban London (by Lucya Starza) to the sacred landscapes of Australia. A broad range of subjects that interest Pagans, and that can be viewed from a Pagan perspective. Most inspiring and thought provoking for me were the essays of Mabh Savage on ‘A modern Celt’; ‘Parenting a potentially Pagan child’ by Nimue Brown and ‘After Paganism’ by Emma Restall Orr.

Mabh Savage did not consider herself religious, but was drawn to the Tuatha de Danaan in the twenty-first century. What’s the relevance of the Celtic stories in the modern age? Is the energy of the Morrigan suitable for use in our time? It can, when anger is focused in productivity or when Mabh Savage appeals to the Morrigan for dreams to guide her. “… and this is often hard and the dreams can be terrible and nightmarish, yet I feel that this is the influence of a being, a force if you will, that has been associated with war and death for so long that she cannot help but bring these shadows with her, and you have to look beyond this to find the message.” Celebrating the seasonal festivals is another way of using the Celtic heritage today.

Many of todays Pagans were raised by parents holding a different faith. But as they become parents, should they raise their children as pagans? And if so, how does one do that? One answer is to take them outside, getting to know nature, engaging them with the natural cycles. “Time spent with the sun and rain, poking about in mud, feeding ducks, and so forth, will teach them about nature.”
Can children be part of rituals, being as they are members of our community? Obviously not in every kind of ritual. What does the rest of society think of our ‘free range children’? There are political aspects to consider.

Emma Restall Orr has thought of herself as a British Pagan for over twenty-five years. However there have been times when she was deeply embarrased to be known as a Pagan. Some behaviour shown by Pagans does not fall into what she considers to be Paganism. Bitching, littering, gossiping. Where does it come from? Are there elements within modern Paganism that encourage such very poor behaviour? The emphasis on the individual may be part of the problem. And the capacity for complex language may be another human quality that helps as well as hinders our religious exploration and our striving for peace. Each word is a limitation too. In stead of gods and ancestors, we may perceive only abstractions. And one cannot make a relationship with an abstraction.

I also liked the essays on Pagan London, the Australian landscape and Paganism in Canada. Lucya Starza shows how it’s hard to be a pagan Londoner without being eclectic. Jane Meredith made her own connection to her region in Australia. And Brendan Myers decribes Canada’s own type of Paganism.

I would love to read another anthology of essays by Pagan writers!