There is quite a lot known of the May 1st celebrations  in Europe with the traditional maypole etc. Somewhat lesser known is the ‘The ‘Obby ‘ Oss’ a Mayday celebration from Padstow in Cornwall, England.

From the Padstow Obby Oss:

“Padstow celebrates Mayday in a unique way, and the custom that has been carried out by Padstonians over centuries has not been allowed to die out. The exact origins of the tradition is unknown, but like other festivals during spring it is thought to be connected with the ancient Celtic festival of Beltane.

C.S. Gilbert wrote about what he saw there almost 200 years ago:

‘There is an annual jubilee kept up at Padstow, on May 1st, known by the name of the Hobby Horse, in illusion to which, the inhabitants dress up a man in a horses skin, and lead him through the different streets. This odd looking animal amuses, by many whimsical exploits, the crowd which follows at his heels, particularly by taking up water dirty water, wherever it is found, and throwing it into the mouths of his gaping companions. These tricks naturally produce shouts of laughter, and the merriments are accompanied by songs made for the occasion. The origin of the festival appears to be unknown.’

Taken from Historical Survey of the County of Cornwall, published in 1820.

Before the First world war there was only one hobby horse in Padstow, the old oss, but in 1919 the blue ribbon obby oss the was introduced. Also known as the temperance oss, its supporters tried to discourage the drunkenness associated with the custom. There are records of a few attempts to tackle the sometimes raucous behaviour associated with the festival, but none have ever worked. During 1837 some residents did not approve of people firing pistols in the air during the celebrations, and so rallied together to try and stop it by putting up posters which threatened people who did fire guns with a fine. 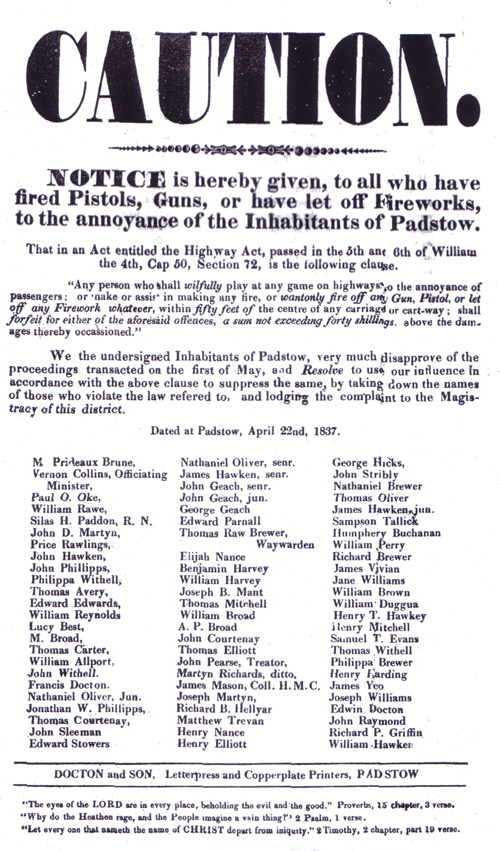 -What Happens on the Day

Mayday in Padstow starts at midnight on April 30th, when its inhabitants sing to the landlord of the Golden Lion Inn. They then carry on singing as they move around the town until the early hours of the morning.

The next day some people are up early collecting flowers to display around the town. Tree branches are tied to lampposts and drainpipes. By around 8am children start to parade their obby oss’s in preparation for the main event. The maysong is played by accordionists and drummers while the supporters sing along.

The Blue Ribbon obby oss leaves the Padstow Institute at 10am to begin its tour of Padstow. Next the Old obby oss appears outside the Golden Lion Inn at 11am. The two oss’s dance round the streets followed by their supporters and at 12pm the old oss has reached Prideaux Place, where it dances outside in front of a large crowd, before it heads back to the Golden Lion Inn. The Blue Ribbon oss visits Prideaux Place later on in the day.

The obby oss outfits are worn by various members of each group throughout the event, and they also take in turns teasing the oss. The teaser waves their teaser club in the air, and dances around the oss while leading it through the streets of the town. The two obby oss’s carry out similar parades at 2pm and 6pm, ending their day around the maypole on Broad Street. Just before it gets dark they are returned to their stables. All the supporters then meet up once again around the maypole at midnight to sing once again.”

Marian Green  writes of the festival in her book “A harvest of Festivals” (1980):

“Padstow is wild and blatant with its red and white dressed dancers led by its small, informal band and its weird , ancient ‘Obby ‘Oss with hisTeaser, an archaic, archetypal figure who might be Winter himself.”

Of all places.. the ‘Obby ‘Oss was introduced in 1989 to Berkeley, California as part of the NROOGD Beltane celebrations. In an article called “Hobby Horses and Associated Rites”  Russell Williams writes

“For the last several years, the Bay Area NROOGD has usually included an obby oss (as it is spelled and pronounced in Padstow) in our Beltane ritual. Some may have wondered at the appearance of this strange creature that is called an oss even though it looks nothing like a horse. And what of its antics, splashing the passersby with water and catching women under its skirt?”

and “With any supposedly ancient British Pagan folk custom, we should always consider the possibility that, like maypole dancing in most places, it is a romantic-era revival or creation. Most such celebrations were discontinued during Cromwell’s rule. Of those begun in the generations after the Restoration, it’s often difficult to tell whether they’re any closer to being a continuation of an ancient Pagan rite than is NROOGD’s Beltane obby oss ritual. I’ve been unable to uncover any evidence one way or the other about Padstow or Minehead Ñ they may be ancient, modern (less than 200 years old), or a modern revival of a more ancient and widespread custom.” 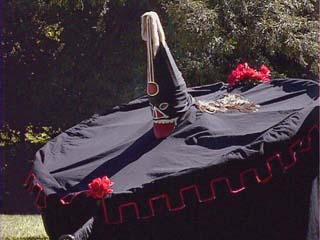 The Queen of the May and Jack in the Green encourage the ‘Oss in his dance. (Photo Rowan Fairgrove)

"Morgana is Anglo/Dutch and lives in the Netherlands. She is a practising Gardnerian HPS. Over the years, she has facilitated a variety of Wiccan groups. She is co-editor of the international and bilingual "Wiccan Rede" magazine, which was launched in 1980 and is coordinator of Silver Circle, a Wiccan network in the Netherlands. As International Coordinator for PFI she travels extensively giving talks and workshops about Wicca and Paganism."
Bekijk alle berichten van Morgana →
Dit bericht is geplaatst in English articles met de tags 'Obby 'Oss, Beltane festivals. Bookmark de permalink.