Here is a review of the DVD by Chas S Clifton: (reprinted with permission, originally appeared in “The Pomegranate” 9.2  2007) 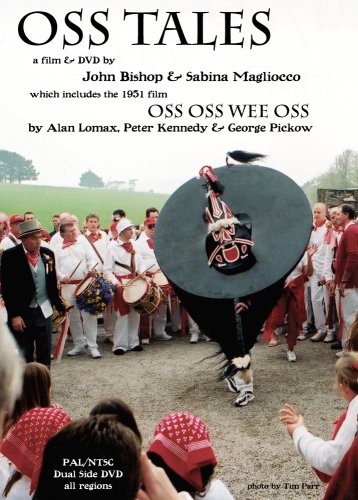 Describing the development of his views on the evolution of contemporary Paganism, Ronald Hutton writes in the “Living with Witchcraft” chapter of Witches, Druids and King Arthur how he came to realize that “[M]odern Pagan witchcraft represented not a marginal, isolated and thoroughly eccentric creed, arguably produced by one rather odd ex-colonial [Gerald Gardner], but an extreme distillation and combination of important cultural currents within mainstream British society which had been developed or been imported during the previous two hundred years.” Likewise the hobby horse (“Oss”) procession in Padstow, Cornwall. For when you watch the oldest of the four short films in this collection, Oss Oss Wee Oss, it is hard to miss the fact that it was filmed in 1951—about the same year that Gardner and his associates were creating Wicca—and that this short documentary displays much the same unquestioning belief in survivals of ancient Paganism in rural Britain as did Gardner and his intellectual mentors.

Completed in 1953, Oss Oss Wee Oss is a masterwork of faux naïveté, beginning when the narrator just happens upon a Padstow fisherman playing his accordion on the quay—a fisherman who is primed to deliver a Frazerian narrative of ancient Pagan survivals. Filmmakers John Bishop and Sabina Magliocco do not stop there, however, and that is what makes Oss Tales—four short films and a study guide—useful to anyone studying either the relationship between folkloric performers and folklore scholars or the growth of contemporary Paganism. Their own documentary, also titled Oss Tales, revisits Padstow in 2004, when what had been a moribund local custom (first documented in 1803, according to Hutton) has mushroomed into a heritage-tourism event that temporarily raises Padstow’s population by a factor of ten. The undoubted economic boost that these visitors provide is due to the earlier interest that serious folklorists took in the event. The 1951 filming inspired the local men who danced the horse and provided its music to create new costumes: white shirts and trousers with piratical red scarves on their heads, red sashes, and drawn-on moustaches and sideburns, possibly inspired by the usual costuming for another Cornish classic, the Gilbert and Sullivan musical The Pirates of Penzance.

Two obvious themes emerge from this collection, therefore. First is the interplay between “tradition” and scholarship, while the second is the persistence of the old narrative of rural England preserving a Pagan past. “This strange dance is a modern remnant of an ancient Springtime Rite in which primitive man rejoiced in the renewed fertility of the land,” proclaim the opening titles of the 1953 documentary. And Padstow musician Charlie Bate—the fisherman on the quay—whose family has long “brought out the Oss” and who himself belonged to the English Folk Song and Dance Society,” says to the camera, “Nobody don’t seem to know the origin of it… Some people say it’s two thousand, three thousand, maybe four thousand year old.” That promise of ancestral Pagan connections in turn informed the California Witches of the New Reformed Orthodox Order of the Golden Dawn (NROOGD). On the basis of the original film plus other accounts, members of NROOGD, which coalesced in the mid-1960s as a self-created Pagan tradition, began bringing out their own May Day Oss at their public ritual in a Berkeley park about fifteen years ago.

So interested were Alan Lomax, George Pickow, and Peter Kennedy in presenting the Frazerian narrative (“Now this ’ere horse cult, so the scholars say, was one of our religions when we lived in caves.”) that they deliberately omitted a great deal of the contemporary social setting. For one thing, there was not one horse, but two: the so-called Temperance Oss procession—now called the Blue Oss—had begun in 1918 with a goal of raising money for charity as opposed to raising money for drinks for the participants.

Its followers now dress in white with blue scarves and sashes. In fact, the 1951 filmmakers not only ignored the second Oss, but they also omitted any pecuniary aspects of the Old Oss event. Likewise omitted were the issues of social class (“You’re born into your colour,” says one Padstow woman in the 2004 film) and politics associated with the two Osses, not to mention the fact the two processions often ended in a boozy brawl, something downplayed today so as not to frighten away the tourists.

Meanwhile, the American Pagans were frustrated because they wanted even more ancient Paganism. “The [1951] video didn’t give us any clues about ritual,” complains Don Frew, one of the NROOGD horse dancers. One might well say that there was indeed ritual in Padstow, but it was more communal than self-consciously religious, and it took place in the pubs and streets rather than in a sacred circle. NROOGD, therefore, inserted the Oss into a typical Wiccan Beltane celebration. In its Berkeley incarnation, the Oss is still paired with a maypole, but gone are the stage-piratical sailor’s whites and gone is the procession through the streets. The Oss stays within a ritual circle in the grassy public park, while participants turn their backs on the surrounding city. The Berkeley Oss is even more of a performer with an audience than are the Padstow Osses.

In the final film, Bishop and Magliocco discuss their debt to the original filmmakers and, together with some of the NROOGD participants, discuss the interplay between participant and observer, in which, as Frew observes, both the Pagans and the academics each get something that they want. Given the individual films’ short length and the inclusion of a study guide on the disk, Oss Tales is ideally suited for classes in religious studies, anthropology, and folklore, not to mention on the tourism industry. Viewers can see and discuss how filmmakers’ and scholars’ perspectives influence how data is selected and presented, as well as noting how the people of Padstow use the Osses in creating and marketing their own civic identity. The NROOGD Pagans, meanwhile, create their own narrative of roots and relationship to the land of California, which has through their rituals— they hope—gained a protector and a tradition. As Magliocco aptly remarks of both Berkeley and Padstow, it is traditional to change and update a tradition.

Padstow, a town on the north coast of Cornwall, celebrates May Day with a unique custom: two hobby horses, or osses dance through the town streets, accompanied by drums and accordions. All Padstownians participate in this exciting event, which has now become a tourist attraction, drawing over 30,000 visitors the first of May to this fishing town of 3000. Folklorists Alan Lomax and Peter Kennedy visited Padstow in 1951, producing a film called Oss Oss Wee Oss (1953). In 2004, filmmaker John Bishop and folklorist Sabina Magliocco returned to Padstow to see how the custom was faring fifty years later.

This DVD has four films–

Oss Tales (2007) 25 min– Re-engages the Padstow May Day in 2004. The film includes footage from Oss Oss Wee Oss and commentary by Peter Kennedy and Ronald Hutton, and people of Padstow.

Oss Oss Wee Oss Redux: Beltane in Berkeley (2004) 14 min– a portrait of a contemporary pagan group in Berkeley, California that yearly re-enacts the custom of the hobby horse as part of its May Day revelries.

About the Oss Films (2007) 11 min– George Pickow and Peter Kennedy talk about making the1953 film and John Bishop and Sabina Magliocco speak about making this DVD.A study guide is included on the DVD in PDF format.