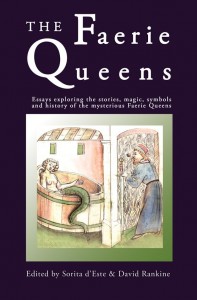 This lovely, sweet, and beauteous Fairy Queen,
Begins to rise, when Hesperus is seen;
For she is kin unto the God of night,
Unto Diana, and the stars so bright
~ Margaret Cavendish, 17th century

Last year I seemed to be tripping over the name ‘Melusine’ and the connection of the Faerie Queens to the European Royal families. I reviewed a book called From Aphrodite to Melusine. Reflections on the Archaeology and the History of Cyprus. (See WROnline – Lughnasadh 2013). “The Melusine tale was connected to the Lusignan family who came from Poitiers. In their family arms there is a snake-woman, since 1192 they had been the Master of Cyprus when Guy de Luisgnan bought it from Richard the Lionheart. It is believed that the Melusine tale was brought to Southern France via Cyprus.”

I showed David Rankine this book when he came over for the PFI Netherlands conference 2013 and he told me about the book that he and Sorita d’Este had edited. The Faerie Queens. Recently I received a copy to review. And what a delightful book!

David’s essay Melusine: Enduring Serpentine Queen is fascinating and made me even more curious to learn more about the ‘Regal link’. He notes: “King Edward IV (1442-1483) married Elizabeth Woodville (1437-1492) in 1464, whose mother Jacquetta of Luxembourg (the duchess of Bedford) traced her ancestry to Melusine. Bingham noted of Elizabeth, described as the most beautiful woman in Britain … It is curious to note that Edward & Elizabeth had ten legitimate children, mirroring the ten children of Melusine and Raymondin, and to further add to the continuation of the mythic theme, on Edward IV’s death, his brother, who became King Richard III, had the marriage to Elizabeth declared illegitimate an subsequently claimed the throne for himself. He was the last of the Plantagenet line, which died with him, in the manner that Melusine had predicted her line would die out.”

Readers who watched the BBC series The White Queen last year will no doubt remember Jacquetta and daughter Elizabeth and their ‘Melusine magic’. The name Plantagenet coincidentally means ‘sprig of broom’. And so in several other essays we read of the influence of the Faerie Queens in poetry, literature, folklore and magic from Arthurian Romance to the Renaissance; from ancient Greece to Scandinavia. Ever present, ever elusive… the Faerie Queen.

And when she is weary of these plays,
She takes her coach and doth go her ways,
Unto her paradise the centre deep
Where she the store-house doth of nature keep.
~ Margaret Cavendish, 17th century.

"Morgana is Anglo/Dutch and lives in the Netherlands. She is a practising Gardnerian HPS. Over the years, she has facilitated a variety of Wiccan groups. She is co-editor of the international and bilingual "Wiccan Rede" magazine, which was launched in 1980 and is coordinator of Silver Circle, a Wiccan network in the Netherlands. As International Coordinator for PFI she travels extensively giving talks and workshops about Wicca and Paganism."
Bekijk alle berichten van Morgana →
Dit bericht is geplaatst in Boeken, English articles, Recensies met de tags Arthurian, Faerie, folklore, grimoires, Melusine, Renaissance magic. Bookmark de permalink.