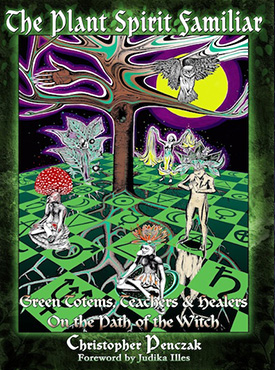 It has been a long time since I saw Christopher but there we were suddenly saying a cheery hello at PantheaCon 2014, San Jose, USA. We talked about how we were, the things that we have been doing recently etc. Still an avid author and teacher he has developed, in recent years, the Temple of Witchcraft into a fully-fledged organisation. See http://templeofwitchcraft.org/ for more information.

However in this book we see Christopher as the healing practitioner, the herbalist. First he describes the different traditions… the “leaves of the tradition” as he calls it. From medieval European familiars to modern methodology such as the work done at Findhorn in Scotland.

He then goes on to describe how you can develop a relationship with plants in a similar way that you can with animals… he talks of Green Totems… and totemism. He describes “the three types of plant allies, the healing plants known as balms, the power plants known as banes and the spirit teachers found in the wise old trees”.

In part two we enter the garden. Here he describes how to deepen the contact with the spirit world of plants. Using meditation and inner shamanic journeys one creates allies. He later discusses “Balms, Banes & Tree Teachers” in greater depth. With exercises and recipes for ointments and essences he helps us to become more proficient with Green or Natural magic. Like the root worker in Hoodoo he warns of the dangers of poisons and entheogens.

Complete with advice for rituals Christopher provides a good start for anyone who wishes to pursue the path of Nature-based spirituality. He has also included an extensive bibliography and advice for those who want to find out more about entheogens.

Written in a friendly, encouraging style Christopher helps us to build up a greater connection to our Green allies.

And his personal FB page

"Morgana is Anglo/Dutch and lives in the Netherlands. She is a practising Gardnerian HPS. Over the years, she has facilitated a variety of Wiccan groups. She is co-editor of the international and bilingual "Wiccan Rede" magazine, which was launched in 1980 and is coordinator of Silver Circle, a Wiccan network in the Netherlands. As International Coordinator for PFI she travels extensively giving talks and workshops about Wicca and Paganism."
Bekijk alle berichten van Morgana →
Dit bericht is geplaatst in Boeken, English articles, Recensies met de tags gardening, herbalism, plants, spirit familiars. Bookmark de permalink.