Review: From Aphrodite to Melusine

From October 2006 until March 2007 the exhibition ‘From Aphrodite to Melusine. Reflections on the Archaeology and the History of Cyprus’ wason display at the Geneva Musee d’Art et Histoire. During the exhibition a series of talks were organised on various aspects of Cyprian history. This book is the collection of these papers.

In Cyprus, an Island with Exceptional Geology byDanielle Decrouez,  two important  geological facts emerge about Cyprus, namely that it is an island without marble (unlike the Greek Cyclades for example) and also that the name Cyprus refers to the copper found there.  Kupros in Greek / cyprium in Latin. Copper has been extracted since antiquity.

The reference to Aphrodite reminds us that it was believed that Aphrodite, Goddess of love and beauty, rose from the waves at Petra tou Romiou, near to Paphos. In Esther Wolff’s talk ‘Notes on the Act of Perfuming Clothes and on the Cypriot Origin of Minoan and Greek perfumery’ we read about the burning of aromatic substances which gives  rise to the word ‘per fume’ through smoke. Clothes (especially those made of linen) were scented by dipping them in oil but as the essences became prohibitively expensive the practice was gradually reserved for religious rites.

In ‘The Cypria, Stasinius, Homer and the Orient’ by Andre Hurst the events leading up to the Trojan War are related. It is in the Cypria that we hear of the Judgment of Paris and the Golden Apple of discord cast by Eris. This is followed by the ensuing argument between the goddesses Aphrodite, Athena & Hera as to who is the most beautiful. Paris gives the prize to Aphrodite who then promises him Helen, the most beautiful of mortal women, as his wife. Paris departs in his search for Helen which ultimately leads to the fall of Troy.

The reference to Melusine alludes amongst others,  the tale or ‘Roman de Melusine…  or Histoire de Lusignan’ compiled by Jean d’Arras about 1382–1394. 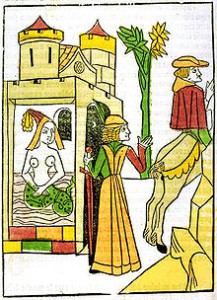 Raymond walks in on his wife, Melusine, in her bath and discovers she has the lower body of a serpent. Illustration from the Jean d’Arras work, Le livre de Mélusine (The Book of Melusine), 1478.  http://en.wikipedia.org/wiki/Melusine

The core of the Melusine tale is that of a fairy who marries a knight. They marry under one conditio… that he may not see her on a particular day… Saturday. She gives him wealth and esteem but of course he perchances a look and sees that she is half human and half serpent. She then disappears… with all the wealth.

This tale was connected to the Lusignan family who came from Poitiers. In their family arms there is a snake-woman. Since 1192 they had been the Master of Cyprus when Guy de Luisgnan bought it from Richard the Lionheart. It is believed that the Melusine tale was brought to Southern France via Cyprus. There are several papers in this book about the Lusignan dynasty, for example of the relations between the ‘Frankish States of the Levant and Cyprus under the Lusignans’ (David Jacoby).

As we read the different papers we become aware of the strategic position of Cyprus in the Age of the Crusades but also its place in the Eastern Mediterranean and the hinterland of Anatolia to the West and Egypt to the South in the Ancient World. A remarkable place whose main source of wealth is copper and olive oil.

This collection of papers reveals a fascinating history of Cyprus.

"Morgana is Anglo/Dutch and lives in the Netherlands. She is a practising Gardnerian HPS. Over the years, she has facilitated a variety of Wiccan groups. She is co-editor of the international and bilingual "Wiccan Rede" magazine, which was launched in 1980 and is coordinator of Silver Circle, a Wiccan network in the Netherlands. As International Coordinator for PFI she travels extensively giving talks and workshops about Wicca and Paganism."
Bekijk alle berichten van Morgana →
Dit bericht is geplaatst in Boeken, English articles, Recensies met de tags Aphrodite, Cyprus, Melusine. Bookmark de permalink.
We use cookies on our website to give you the most relevant experience by remembering your preferences and repeat visits. By clicking “Accept All”, you consent to the use of ALL the cookies. However, you may visit "Cookie Settings" to provide a controlled consent.
Cookie SettingsAccept All
Manage consent