Review: Magic of the North Gate 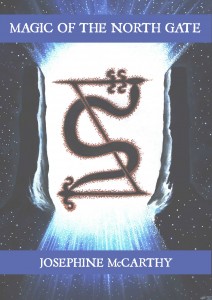 This is not a book for beginners or for people who think magic is an easy way to achieve your goals. Magic is hard work, it takes a long time to learn and long hours of practice. It can drain your body and will reveal the weaknesses of your body. (The chapter on ‘The body and magic’ gives some interesting insights).

Magicians and occultists have long spent their time in isolation, indoors, ignoring the land and beings around; the magic totally disconnected from the tides of power, knowledge and contact that flow from the surrounding land. How to connect with the land? One way is to explore the landscape and the inner populace of a land via spirituality/religious format and the other is to explore without the religious/cultural interface but with more of an attitude of what power is here? How does it work and how do I interact with it? It depends on the magician which way to choose. But even when you want to escape the city and build yourself a house in your private woods, the first thing to do is really look at the land, and learn how it works, how it would be if you were not there. We have to relearn things our ancestors probably knew well. The patterns and tides are much bigger than we are and it can be scary. Read the local myths and legends and ask for advice to your guides, be they spirits or deities. The building of shrines as a place for contact and to exchange energies is one of the tasks of a magician. The book gives ample examples of how working with the local spirits can work well, but also of the opposite.

Chapter 6 is dedicated to ‘Working with the magical elements’ and it starts by mentioning that two things are to be observed: 1. “Some recently formed traditions have aligned their use of the magical directions in accordance with psychology and poetic expression. That is more relevant for a religious pattern, like Wicca for example, but not so useful for magic, particularly magic that reaches deep into the inner worlds. The psychologised use of the directions and elements works only on the threshold of the human psyche and not beyond and is therefore limited in deeper magic.” 2. Some magical/Pagan traditions developed their use of the magical directions in direct relationship with the lay-out of the land where it developed. When the tradition moves to another land, that may be no longer relevant or helpful.

Chapter 7 is devoted to ‘Divine power and its containers’, chapter 8 to ‘The dead, the living and the living dead’ and chapter 9 to ‘Weaving power into form’.
Appendices deal with ‘The magical understanding of good and evil’ and ‘Understanding the void and the inner worlds’ and there’s an index.