Review: Witchfather: A Life of Gerald Gardner, Volume 1 and 2 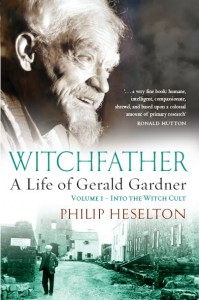 In the foreword he writes that he has made extensive use of both Bracelin’s and his own books. In volume 1 of course we read of Gardner’s early life including his genealogy and the origin of the name Gardner. Unfortunately Philip has not found out why Gerald had the name Brosseau. It sounds French of course but there seems little evidence of a French connection in the family.

We read of Gerald’s life abroad under the wings of his governess Georgiana Mc Combie, affectionately known as ‘Com’.  These first chapters also describe colonial life in Ceylon, now Sri Lanka. It was in Ceylon that Gerald was on his own as a young 20-year old. He became involved on a tea plantation and much of his social life was connected to his work there. He was involved if not a member of the Ceylon Planters Rifle Corps in the early 1900’s. He returned to England in 1907 having been in Ceylon for six years.  Philip describes the next period in Gerald’s life as the ‘Edwardian Interlude’.  It was also the meeting with the Sergenesons, a family living in Formby, near to his birthplace of Blundellsands … a meeting Philip describes as important to Gerald as meeting with the naturists in 1936 and the witches in 1939.

Gerald continued his adventures visiting Singapore and later Borneo. There he would learn about the Dyaks. He would write about his experiences in his book The Meaning of Witchcraft (1959) and he would also describe the Kris, or sacred dagger, in his book Keris and other Malay weapons (1939). Philip dedicates a chapter to the Keris in The Mystical Weapon (chapter 10) and how Gerald would learn more about the secret rituals.

In the chapter The Arrival of a Goddess Heselton describes in detail the effect Cyprus had on Gerald and the subsequent novel he wrote called A Goddess Arrives , probably about 1939. I have a copy published by Godolphin House in 1997. Was this novel a recollection of a former life? It was after this novel that Gerald really became involved with Witchcraft, or the Wica as the people called themselves. 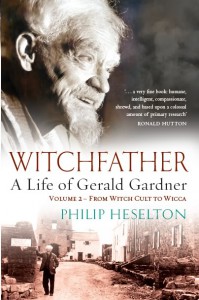 In Volume 2 we read of Gerald’s journey from “the Witch Cult to Wicca” as Philip describes it.

From his encounters in the New Forest to his “Resting place in Carthage” Philip writes in detail of the meetings with the people from the Crotona Fellowship and of course Dorothy Clutterbuck, Cecil Williamson, Doreen Valiente. Fred Lamond and Patricia Crowther have  provided Philip with accounts from their own books or personal conversations.

Philip has included a number of (as far as I can tell) previously unpublished photographs.

All in all an extraordinary biography which will interest anyone who is keen to understand the social and magical background of the luminary, the “Witchfather” of Wicca, Gerald Gardner.

"Morgana is Anglo/Dutch and lives in the Netherlands. She is a practising Gardnerian HPS. Over the years, she has facilitated a variety of Wiccan groups. She is co-editor of the international and bilingual "Wiccan Rede" magazine, which was launched in 1980 and is coordinator of Silver Circle, a Wiccan network in the Netherlands. As International Coordinator for PFI she travels extensively giving talks and workshops about Wicca and Paganism."
Bekijk alle berichten van Morgana →
Dit bericht is geplaatst in Boeken, English articles, Recensies met de tags Gardnerian, Gerald Gardner, history, Wicca, witchcraft, witches. Bookmark de permalink.
We use cookies on our website to give you the most relevant experience by remembering your preferences and repeat visits. By clicking “Accept All”, you consent to the use of ALL the cookies. However, you may visit "Cookie Settings" to provide a controlled consent.
Cookie SettingsAccept All
Manage consent