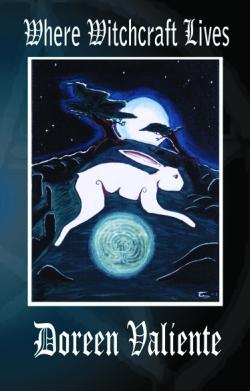 When I bought the original publication of this book – it must have been the early 1980’s – I never imagined it would become a classic. In fact it was the first book I had read by Doreen, and it inspired me when I first became involved in Wicca.

It has been out of print a number of years now so it was wonderful to hear that it was being reprinted. A slim volume of only 152 pages, it looks very innocent but as you read the various chapters, you begin to realise how remarkable this book really is. Using Sussex (her adopted county) as her focus Doreen writes of witchcraft as being “..strands of belief, aboriginal, Celtic, Roman and Saxon (which) will have eventually made up the fabric of witchcraft. Christian persecution and banning, as I shall show further on, drove it underground and made it into a secret society”. And indeed Doreen discusses many diverse subjects using her own personal research.

Research which is still valid in understanding what modern witchcraft is today. From extracts of Sussex Witch Trials to Folk Rites we see how deeply embedded pagan worship was and still is in rural England “from what I have been told, and such scraps of information as have come my way ….. that Sussex is not the only county where witchcraft is still practiced … but also in Essex, the Cotswolds and Lancashire & Yorkshire.” We now know who these ‘informants’ could have been – for example, Gerald Gardner. The information about ‘The Old Religion’ and ‘The Old Ones’, about initiations, the Sabbats and Esbats, about the working tools (including the Athamé, with accent) and the Elements, are straight from Gardnerian Wicca. Or perhaps it is the other way around! In a down-to-earth, no nonsense, manner Doreen lets us see into her ‘kitchen’. I can even hear her talking with her unmistakable Sussex accent.

A true village witch her vision and foresight helps to put a number of things into perspective. Her words still ring true today. For anyone who wants to learn more about Wicca from the source then this book is a ‘must have’. This version contains an introduction by John Belham–Payne (who is chiefly responsible for this new edition!) and a foreword by Professor Ronald Hutton. Complete with many unpublished photographs this edition will be highly sought after.

"Morgana is Anglo/Dutch and lives in the Netherlands. She is a practising Gardnerian HPS. Over the years, she has facilitated a variety of Wiccan groups. She is co-editor of the international and bilingual "Wiccan Rede" magazine, which was launched in 1980 and is coordinator of Silver Circle, a Wiccan network in the Netherlands. As International Coordinator for PFI she travels extensively giving talks and workshops about Wicca and Paganism."
Bekijk alle berichten van Morgana →
Dit bericht is geplaatst in Boeken, English articles, Recensies met de tags Doreen Valiente. Bookmark de permalink.
We use cookies on our website to give you the most relevant experience by remembering your preferences and repeat visits. By clicking “Accept All”, you consent to the use of ALL the cookies. However, you may visit "Cookie Settings" to provide a controlled consent.
Cookie SettingsAccept All
Manage consent