by Marloes Visser and Mark Vine 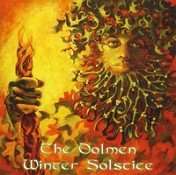 Since I have seen The Dolmen perform at a Faerie Fest in Brighton I am totally hooked on their wild, devil-may-care, ‘piratey’ style of music, that one just cannot keep still to. It is so fresh and infectious that I can foresee them gaining a veritable army of fans here in the Netherlands to go with their almost fanatical following in their native England.

So when Morgana asked me to write a review on one of their CDs, I did not have to think twice before agreeing. I had some difficulty deciding which one to pick though, since they are all equally good, but I finally decided upon the Winter Solstice CD since this CD relates to the time of year we are in right now. The time between Samhain and the Winter Solstice. With a storm raging around the house, leaves swirling through the air and black clouds racing through the sky, this CD brings about the warmth of the season, but also, in other ways, the bitterness of the harsh winter to come.

The music is many things all at once, mystical, thoughtful, raw and energised, the quintessential band for all seasons. The Dolmen have produced a remarkable album, quite unlike any other, a Yuletide album for the ages. The songs, all original and penned from within the band or surrounds are so very instantly memorable, as to easily stand the test of time. Some of the tracks portray a different side to the band, proving that they can be just as sensitive with their music as they can be fierce, feral and untamed.

The CD commences with the ‘Witches Reel’, a song based on a spell sung as a reel by Geilles Duncan at her trial during the Scottish Crusade against Witchcraft in 1591. She was accused of playing the reel in a dance of Witches on Hallowe’en in the kirk at North Berwick. By raising rain, wind and the tempest with the help of Satan, they wished to sink the vessel that would be occupied by the King and his young protestant bride on their return trip from Copenhagen. After torture and confession she was strangled and burned at the stake.

I was told that during the recording of the song, more than once the weather had gone awry, producing hail and fierce rainstorms.

‘Staglord and Queen’ takes you to a winter landscape in the snow where the Staglord, The Horned God, meets his Queen.

‘Golden Sickle Sunrise’ is the celebration of the return of the Sun at the cold Solstice morning when the ancient Druids of Albion would gather to walk to a sacred oak tree and harvest the mistletoe that grew from it with a golden ceremonial sickle, taking great care that none of the mistletoe touched the ground in the process. If it did, it would lose its power, mistletoe being a parasitic plant that does not grow from the ground up and was therefore imbued with magical properties. This horticultural phenomenon gave rise to the legend of Frigga, the Queen of the Northern Gods, who had a perfect son, Baldur. She bound the four elements to protect him and made it so that he could not be harmed by anything that grew out of the earth. However, she did not bargain on the cunning of the God of mischief, Loki, who was jealous of Baldur’s beauty and goodness. Loki tricked another blind God into firing an arrow made of mistletoe, which pierced Baldur and killed him. Frigga was overcome with grief and called upon the four elements of Fire, Earth, Air and Water to make good on their pledge and so Baldur was restored to life.

Another beauty on the CD is the song ‘Midnight Garden’,the lyrics are written by a American friend of Taloch’s, Katherine Brown. She sent it to Taloch as a poem and he put it to music. It is a beautiful song about the ‘Midnight Garden’; in other words…a graveyard…. and the Wild Hunt. It is about the veils thinning at Samhain and the ancestors close by, the words accompanied by Taloch’s haunting voice bring about an atmosphere of secrets, love and lost souls.

‘The Oak and Holly Kings’ and ‘Holly and Mistletoe’ are beautiful Yule inspired songs, sung by Taloch, his flautist daughter Keri and bassist Kayleigh.  They bring in the festive mood of Yule and the return of the Oak King.

With ‘Winter Solstice Night’ you can imagine yourself standing between the stones at Stonehenge, waiting for the first rays of sunlight to caress the sacred monoliths and bring forth the first tantalising hopes of spring.

‘Witch Mountain’ takes you to a celebration of Witches, warming themselves around a campfire high upon a lonely mountain.  And in fact, the lyric was especially written for Katherine Brown (who has a cabin on such a mountain in South Carolina) by Dolmen lyricist and friend, Mark Vine. Taloch’s music almost adds a kind of old style Southern Baptist feel to the piece.

‘Summerland’ is an exquisite song  beautifully sung by Keri, and especially written by Taloch for a loved young lady lost to the Summerlands, who sadly committed suicide at the time that the album was being made. Taloch and Keri sang it live at her graveside at the funeral for the first time in a very emotionally charged atmosphere, as one can imagine. I heard it live at Witchfest International last week, and it brought shivers to my spine.

‘Frosty Solstice Morn’ ,’Witch I am’ and ‘Bringing The Outside In’ take you into a different mood… you can hardly sit still with these songs, which really  shake up the festive mood. In fact, ‘Bringing The Outside In’ was written by Mark Vine and Taloch as a tribute to the late lamented 1970s Glam Rock star Marc Bolan. and the music is very reminiscent of his unique sound.

From the opening track ‘Witches Reel’, a rousing song about a genuine witch trial from the 17th century, to the last track, ‘Bringing The Outside In’, the Winter Solstice album is full of innovative surprises at every turn.

On the whole, a brilliant album. Not your usual Yuletide album, but one with the distinctive sound and song writing style of The Dolmen.

The Dolmen will be performing live at the Conference of the PFI International on 14th May 2011, don’t miss it!!

Resistance is useless …. Surrender now and buy an album. You will all be Dolmenised in the year to come !

"Morgana is Anglo/Dutch and lives in the Netherlands. She is a practising Gardnerian HPS. Over the years, she has facilitated a variety of Wiccan groups. She is co-editor of the international and bilingual "Wiccan Rede" magazine, which was launched in 1980 and is coordinator of Silver Circle, a Wiccan network in the Netherlands. As International Coordinator for PFI she travels extensively giving talks and workshops about Wicca and Paganism."
Bekijk alle berichten van Morgana →
Dit bericht is geplaatst in English articles, Muziek, Recensies met de tags folk music, The Dolmen. Bookmark de permalink.
We use cookies on our website to give you the most relevant experience by remembering your preferences and repeat visits. By clicking “Accept All”, you consent to the use of ALL the cookies. However, you may visit "Cookie Settings" to provide a controlled consent.
Cookie SettingsAccept All
Manage consent