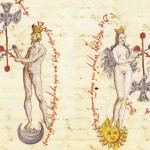 Polarity, seems to be founded and fed by a dichotomy: male–female, and from those, positive-negative, dark–light, birth–death, and so forth. But is this the only possibility?