Location: in a room-for-two deep in the pine woods of central Holland.

Scene: morning coffee… two young and innocent witches (that sounds like an anomaly to start with…)

“Do you know, I’ve been thinking…” (this sounds extremely ominous of course) “wouldn’t it be a good idea to start a small newsletter. I mean for people like us who have spent ages looking for like-minded souls. I’m sure there must be one or two others who wouldn’t mind exchanging news and things…”

“Mm, why not? I suppose we could stencil something together… mm, yes, sounds like a good idea. Do you a want a biscuit??”

And after this incredible piece of brainstorming, ‘Wiccan Rede’ was born.

Some say it was part of a larger cosmic plan, others that it was lover’s folly. Personally I believe it was somewhere in the middle. One could certainly argue that it has been a labour of love. If you’ve ever had to put a magazine together at New Moon, during a house move, during renovation of said house, in between changing nappies and making dinner then you will know this is no exaggeration!

And so at the Spring Equinox 1980 the first ‘Wiccan Discourse’ (the word ‘rede’ means discourse or speech in Dutch) took place. At first growth was slow but fairly quickly WR was established. We retained the Anglo/Dutch format which helped us to keep the international contacts. And gradually WR acted as one of the first points-of-contact for Wicca. This enabled us to reach more people who in turn wanted to “do” things and so in 1982 we started our famous ‘Friday Evening Meetings’” once a month. And of course one thing lead to another.

And what else do we have today? Well apart from the fact that WR is still going strong we have a thriving Wiccan community in Holland, with four regular ‘Witches cafes’ – with a new one being launched – where people can meet and chat, to the more serious business of maintaining covens. Shortly after the introduction of  Gardnerian Wicca, Alexandrian Witchcraft was also introduced. At first the contact was somewhat tense between the two traditions but it is now one of mutual respect. There are also diverse groups of other Witches, Pagans, Goddess Spirituality groups and so on.

The important thing is that there is a thriving network. Most of you know that I am not interested in large umbrella organisations – any such organisation should only concern itself with networking and fortunately most of the Witches in Holland tend to agree with us!

I believe that WR has helped in underlining this notion of organic growth. People need to have the freedom to choose their own spiritual path. We can help people in their search but we cannot ‘change’ their minds. This is for me the quintessence of Wicca. When I started on my Wicca path, although as I hinted above I was able to ‘use’ Merlin, and later other readers, as a sounding board, I had the freedom to discover what it was that made me tick – what it meant to express my own spirituality.

I noticed that it took people (myself included) at least two years to get to grips with what Wicca was all about. Not the intellectual framework, but the deep sense of wonderment of being your own person. Knowing where your centre is and building and nurturing that sense of well-being, even in the darkest moments.

And it is perhaps this aspect which is now being ‘forgotten’ as we look at the wealth of information being offered today. All those involved in publication – whether a magazine or website – should still ask themselves this question “Are we allowing the reader enough room for self-discovery?” Or are we becoming guilty of ‘overkill’. Do our articles prickle the imagination? Are we being innovative? If we are then 20 years of WR certainly has been worth the time and effort.

How do other readers feel about the amount of information being offered today. Are we guilty of overkill? How can we inspire people these days? Is the personal quest important or is it enough that people know the ropes, the intellectual ins and outs? What is the ‘personal quest’? Mmm, more food for thought… well I’ll save my thoughts for another issue of ‘Wiccan Rede’.

I would like to take this opportunity of thanking everyone who has helped WR remain free and independent in the “best pagan tradition” during the last 20 years. I never imagined that we would be around two decades later. However it would never have been possible without you the reader and contributor. A big thanks all round!!

Original art work by Merlin, in the early editions everything was stencilled… 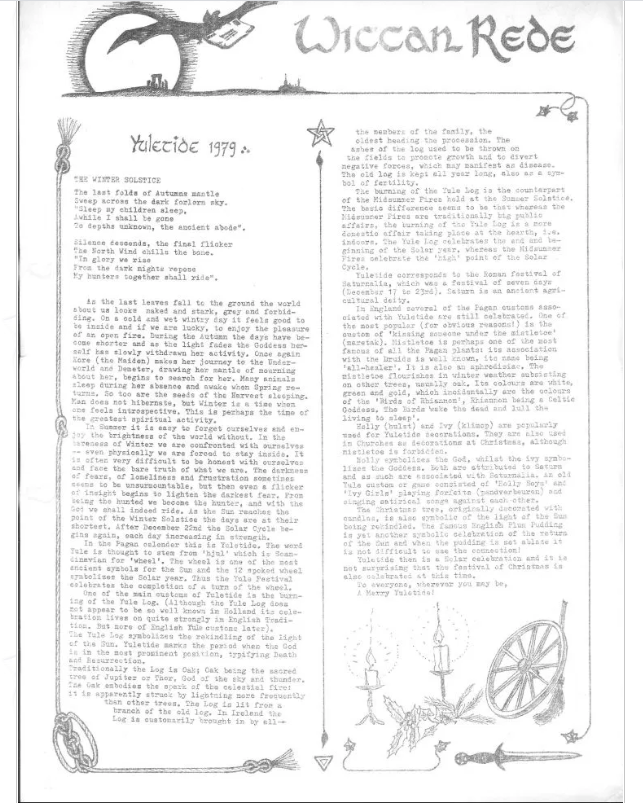 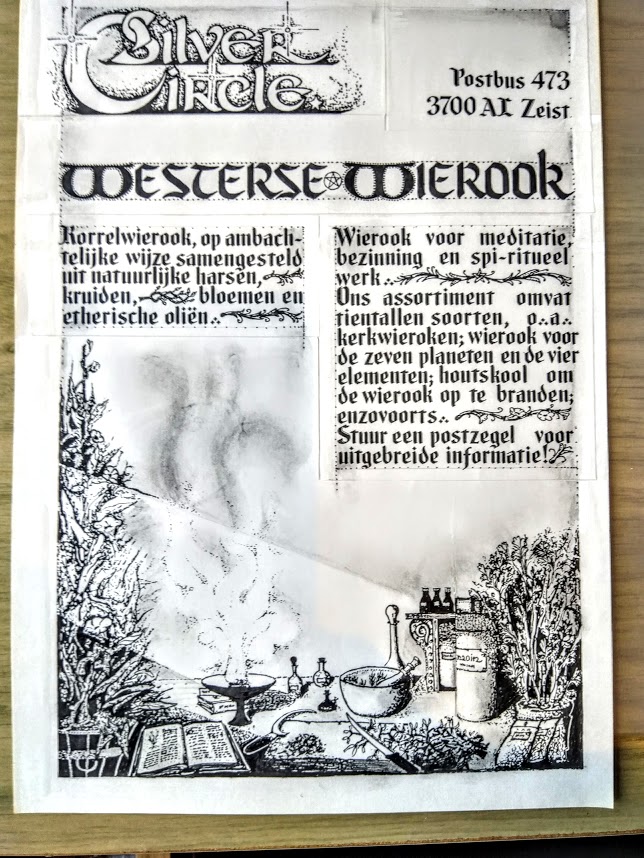 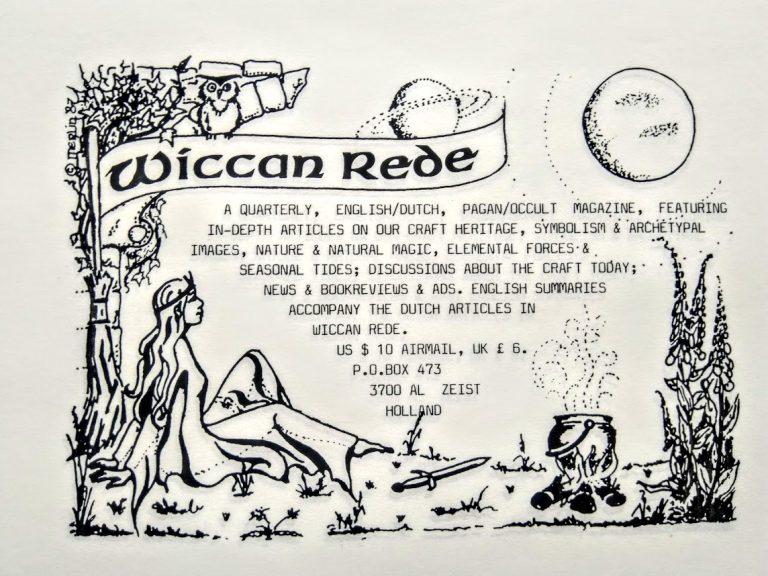 "Morgana is Anglo/Dutch and lives in the Netherlands. She is a practising Gardnerian HPS. Over the years, she has facilitated a variety of Wiccan groups. She is co-editor of the international and bilingual "Wiccan Rede" magazine, which was launched in 1980 and is coordinator of Silver Circle, a Wiccan network in the Netherlands. As International Coordinator for PFI she travels extensively giving talks and workshops about Wicca and Paganism."
Bekijk alle berichten van Morgana →
Dit bericht is geplaatst in English articles met de tags 1980, Merlin & Morgana, newsletter, Wiccan Rede. Bookmark de permalink.
We use cookies on our website to give you the most relevant experience by remembering your preferences and repeat visits. By clicking “Accept All”, you consent to the use of ALL the cookies. However, you may visit "Cookie Settings" to provide a controlled consent.
Cookie SettingsAccept All
Manage consent