On the afternoon of August 16, 2019 I heard the sad news that Michael had passed away.

He was one of the first American witches I contacted when we exchanged magazines in the late 1980’s. He was Lady Cara’s first HP and Michael introduced us to many of the witches and pagans in the New York area and Florida. He was also the first National Coordinator for PFI USA and he also attended the PF conferences in London. More about that later…

He was born in Greenlawn, New York on February 21, 1956.
Link, who is the current NC PFI USA and followed in Michael’s footsteps, wrote recently: “Michael discovered the Craft when he was only 16, precocious and eager to learn more. He was encouraged to spend the next two years reading and growing, and to come back when he turned 18.

Michael Thorn (a surname he chose for himself based heavily upon its numerology) later became the first High Priest of Path of the Pentacle coven, working together with Lady Cara. Michael was a champion for gay rights, both in and out of his religious life. He founded a coven for gay men, a professional organization for gay nurses, and was active in New York’s gay pride events.

Michael became active in the general Pagan community, holding a variety of leadership positions with the Covenant of the Goddess (CoG) including their National First Officer, Public Information Officer, Network Coordinator, and Interfaith Representative at the World Parliament of Religions.

He was the Pagan Federation International’s very first National Coordinator for the United States and was known and admired on both sides of the Atlantic. Doreen Valiente and Patricia Crowther both knew and liked Michael. (Alex Sanders threw a drink in his face!) Had he not become ill, just imagine the memoirs Michael could have published one day…

A builder of bridges across communities, Michael was active in leadership roles in Pagan organizations. As the very first National Coordinator for the Pagan Federation International (PFI), Michael interacted with others in many countries. More importantly, as National Coordinator he helped others to interact too.

As National First Officer for the Covenant of the Goddess (CoG) and other positions (both elected and appointed), Michael interacted with pagans across the country. At the Parliament of the World’s Religions, he published a paper and  represented Paganism in a positive light to clergy of many other religions from around the world.

As a thank you, both these organizations awarded Michael certificates of appreciation, expedited before his dementia worsened, so that he would still be able to understand their acts of gratitude.

Michael spent the later years of his life as an active member in the Spiritualist community. His local group (the Summerland Church of Light in Bay Shore, NY) describes Spiritualism as “the Science, Philosophy and Religion of continuous life, based upon the demonstrated fact of communication, by means of mediumship, with those who live in the Spirit World.” (As a Spiritualist trained in communication across the veil, don’t be surprised if you hear from Michael one day…)

Many aspects of Michael’s life were eloquently captured in a tribute to him published by The Wild Hunt, perhaps the largest, most well-read news resource for the Pagan community. “Michael communicated lovingly, shared that Wicca and Witchcraft were neither alien nor foreboding.”

Quoting one of Michael’s press interviews, “We have very strong ethical standards and beliefs about not causing harm to anyone.” He added, “We feel that anything that you do, whether it be good or evil, will eventually return to you. If you really believe that, then it isn’t smart to do anything harmful.”

In my own Wiccan Community he has also been remembered. Michael visited us in the Netherlands in the 1990’s and joined in with one of our celebrations. Here are a couple of photos:

(Michael with us at a Lammas Celebration in Zeist, Netherlands, 1992) 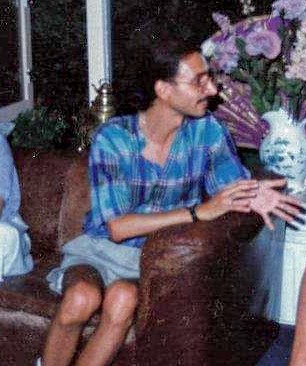 And at one of the European gatherings in 2010.

I also met him in the UK when we would meet for the PF conferences as I mentioned earlier.

I will always remember the PF conference in 1997 when Doreen Valiente gave a talk. Michael who had already done the interview with her for ‘Fireheart’ had come over for the conference and we were staying together whilst we were in London. We both had a lovely chat with Doreen at the conference  – and later published the Fireheart interview in our magazine ‘Wiccan Rede’ (paper version).

“Witchcraft is a life-affirming, earth- and nature-oriented religion which sees all of life as sacred and  interconnected, honors the natural world as the embodiment of divinity, immanent as well as transcendent, and experiences the divine as feminine and often as masculine, as well. Like the spiritual world view and practices of Native Americans and Taoists, Wiccan spiritual practices are intended to attune humanity to the natural rhythms and cycles of the universe as a means of personally  experiencing divinity. Rituals, therefore, coincide with the phases of the moon, the change of the  seasons, solstices and equinoxes and days which fall in between these such as May Day and Halloween.

This calendar of celebrations is referred to as the Wheel of the Year. Most Witches consider their practice a priest/esshood, akin to the mystery schools of classical Greece and Rome, involving years of training and passage through life-transforming initiatory rituals.

All Witches agree on an ethical code known as the Wiccan Rede, “An it harm none, do what ye will,” which honors the freedom of each individual to do what she or he believes is right, but also recognizes the profound responsibility that none may be harmed by one’s actions.”

Link: “A builder of bridges across communities, Michael was active in leadership roles in Pagan organizations. As the very first National Coordinator for the Pagan Federation International, Michael interacted with others in many countries. More importantly, as National Coordinator he helped others to interact too. As National First Officer for the Covenant of the Goddess (CoG) and other positions (both elected and appointed), Michael interacted with pagans across the country. At the Parliament of the World’s Religions, he published a paper and represented Paganism in a positive light to clergy of many other religions from around the world”.

Rich Wandel, who was part of Michael’s Coven, remembers his “Travels with Michael”.

“In the early eighties I was looking for some sort of spiritual path. I had left Catholicism some time before, at first from disgust at their view of gays and of women, but also from a growing realisation that monotheism was itself a part of the problem. I picked up a local weekly newspaper in Queens, NY and saw a small ad for a Wiccan Coven. I replied, and a short while later I first met Michael Thorn, leader of the Coven. In a local diner, I sat across from an amazingly thin man several years younger than myself. We ate and talked, each interviewing the other. I joined the Coven.

While still in the Outer Court group, Michael asked me to join him on a trip to England. We did some of the usual London sites, but mostly we spent the time visiting sacred sites – Stonehenge, Avebury, Glastonbury – and staying with some of the leading Wiccan and Pagan authors. In Bath we stayed with Marian Green and visited the Roman baths. With her we did some experiments in stilling our minds and nerves. Michael could do this a great deal more than I could. What I remember most about Bath, besides the baths themselves, is the ancient Oak in a small courtyard near the cathedral. One evening, walking by myself, I encountered this grand person of the fields and had a short but intimate conversation with her. I think travelling with the calm Michael was having its effect on me even beyond any specific information I was picking up along the way.

Travelling with Michael, whether in the material world or the world of spirit, is perhaps the single most potent influence on my life. It is only a very few people we meet that are truly important to our path. For me, no person has had a more profound impact than has Michael.”

His passing was announced on Facebook and many people voiced their condolences and their remembrances. Here are a couple:

Lady Cara: Michael was dedicated to the growth of the Craft. He was a man that travelled throughout the US and Europe working and sharing with many people of different traditions. He was well accepted in many communities. Magic in all its forms was his passion. He was gay, kind, thoughtful, and powerful. I’ve met few that could reach his level of knowledge. Working with him for 7 years was a pleasure. A piece of my heart goes with him. He was so special that there are no words to explain how much he is missed. A piece of my heart is now missing. Great journey, Michael. Until we meet again, Hail and Farewell…

Vivianne Crowley: A gracious and gentle priest who will be remembered lovingly by those on both sides of the Atlantic, we bid him, ‘Hail and Farewell!’

Kalisha Zahr: I first met Michael in the late 1980s at a Gardnerian gathering here in the US. He was a lovely man. I only met him that once, but we really connected and stayed in touch over the years. May he rest gently in the arms of the Gods. He will be remembered. 💖

I too will remember Michael as a soft-spoken, gentle soul. His dedication to the Craft and especially for his support of PFI and the larger Pagan community was second to none. May he be remembered and rest in peace in the arms of the Goddess.

The interview Michael did with Doreen Valiente for a 1991 edition of ‘Fireheart’ magazine. The text of the interview is in two parts and can be read here:

Donations may be made in Michael’s name to:

"Morgana is Anglo/Dutch and lives in the Netherlands. She is a practising Gardnerian HPS. Over the years, she has facilitated a variety of Wiccan groups. She is co-editor of the international and bilingual "Wiccan Rede" magazine, which was launched in 1980 and is coordinator of Silver Circle, a Wiccan network in the Netherlands. As International Coordinator for PFI she travels extensively giving talks and workshops about Wicca and Paganism."
Bekijk alle berichten van Morgana →
Dit bericht is geplaatst in English articles met de tags Michael Thorn, Wiccan elders. Bookmark de permalink.