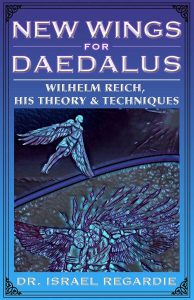 On the back cover of this book we read:

“Though Francis Israel Regardie (1907–1985) is best known for his writings on the Western magical/mystical system known as the Golden Dawn, that is not how he made his living. He was a Doctor of Chiropractic under which license he practised the psychotherapeutic methods of Wilhelm Reich, M.D. (1897–1957).

Reichian Therapy was a revolutionary approach to dealing with psychological issues. Reich, who had once been an associate of Sigmund Freud, had developed important extensions to psychological theory and the therapy methods of the day. But in a clinical setting he and others were continually faced with the intractability of many patients against the therapeutic methods then in use. He came to believe that this ‘armoring’ was not simply a ‘head issue’, but was elaborated in actual physical armoring of the musculature. In time he developed a novel, and highly successful, approach to psychotherapy: rather than just talk with his patients, he manipulated and attacked the muscular armor directly. But today we see almost nothing of his methods except in Christopher Hyatt’s Radical Undoing and Alexander Lowen’s Bioenergetics.

First written in the 1950’s and updated through the 1970’s, this never-before-published tour de force provides a masterful description of both Reich’s theory and clinical practice. It is an indispensable tool for anyone interested in one of the most effective psychotherapeutic methods ever devised”.

Nicholas Tharcher, one of the co-founders of The Original Falcon Press, formerly New Falcon Press, writes in the foreword how this book came to be. Not without controversy Israel Regardie explains why he wrote the book “In this thesis, I propose to give a brief history of Reich in order to place his work in the proper perspective of psychiatric endeavour and to indicate the possible motives for his ostracism and repudiation by modern psychoanalysts”

It is fascinating to read some of the case histories and how Regardie interprets Reichian method. I was reminded of how important the concept of ‘muscle memory’ is to ritual work. Regardie, “It was Reich who developed the thesis that is the mainstay of this book: that muscular tensions are requisite to emotional inhibition, that the muscular armor is essentially identical with the character armor”.

It has also inspired me to look at Contemporary Reichian Therapy . A captivating book even if you are not involved professionally in (psycho)psychiatry.

NB I loved the book cover artwork by Krys Koseda.

Israel Regardie (1907-1985) was considered by many to be the last living Adept of the Hermetic Order of the Golden Dawn. At an early age, Regardie worked as Aleister Crowley’s personal secretary. In addition to his extensive writings, Regardie practiced as a chiropractor and as a neo-Reichian therapist. He taught psychiatry at the Los Angeles College of Chiropractic and contributed articles to many psychology magazines.

"Morgana is Anglo/Dutch and lives in the Netherlands. She is a practising Gardnerian HPS. Over the years, she has facilitated a variety of Wiccan groups. She is co-editor of the international and bilingual "Wiccan Rede" magazine, which was launched in 1980 and is coordinator of Silver Circle, a Wiccan network in the Netherlands. As International Coordinator for PFI she travels extensively giving talks and workshops about Wicca and Paganism."
Bekijk alle berichten van Morgana →
Dit bericht is geplaatst in Boeken, English articles, Recensies met de tags Falcon Press, Israel Regardie, Wilhelm Reich. Bookmark de permalink.
We use cookies on our website to give you the most relevant experience by remembering your preferences and repeat visits. By clicking “Accept All”, you consent to the use of ALL the cookies. However, you may visit "Cookie Settings" to provide a controlled consent.
Cookie SettingsAccept All
Manage consent