Review: The Pagan Heart of the West

The Pagan Heart of the West. Embodying Ancient Beliefs and Practices from Antiquity to the Present – volume I and volume II
Randy P. Conner
Vol I. Deities and Kindred Beings. ISBN 978-1906958879
Vol II. Nature and Rites. Paperback. ISBN 978-1906958886
Available via https://mandrake.uk.net/the-pagan-heart-of-the-west/ 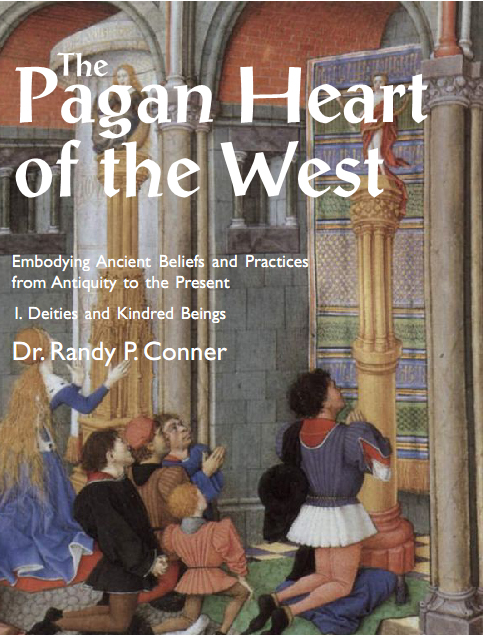 On the back cover we read “The Pagan Heart of the West challenges current academic notions that paganism died when Christianization occurred; that the transition from paganism to Christianity was a fairly easy, nonviolent one; that persons once pagan were happy to accept the new religion because it fulfilled them or because they viewed it as superior – as if the Inquisition never happened; and that all things pagan are in fact Christian prior to the mid-twentieth century, even though they demonstrate little or no connection to the Christian New Testament. Likewise, Pagan Heart challenges narrow conceptions of ’the West’.

Applying Indigenous and decolonial theories, together with Michel Foucault’s conception of subjugated knowledges, Pagan Heart suggests that instead, paganism should be explored as an ancient and indigenous set of common beliefs and practices, at once ubiquitous and local, that includes the reverence of deities; the veneration of nature; rites celebrating the seasons and the life cycle; practices of healing, divination, and magic, often guided by ritual specialists; and arts and philosophies giving expression to pagan figures, concepts, and narratives.

In these first of five volumes, Pagan Heart focuses on the utilization of theories that contest absolutist language supporting the so-called death of paganism; and on the worship and veneration of ancient deities and kindred beings. Like the other volumes, this volume demonstrates that paganism has not only persisted over the course of millennia, but that it has also undergone metamorphosis and innovation.

Most importantly, Pagan Heart emphasizes that the ancient gods did not die when Christian authorities forbade their worship and sought, in N. Scott Momaday’s terms, to commit deicide, but instead that they continue to exist and thrive.”

I was curious to read Conner’s appraisal of the current academic viewpoint on (neo) paganism having followed the recent slight on Pagan Studies which started with “What is wrong with Pagan Studies – Markus Davidsen/ 2012”. As a practitioner I have also given papers on subjects such as Wicca at various conferences. I have seen the difficulties facing scholars who are also informants but also the changes within academia. And there have definitely been changes.

I found the Introduction: Starting out on the path perhaps the most interesting chapter in the first volume. As Conner points out Pagan Studies is a new, emerging, discipline. He notes that the field of Pagan Studies ‘has two primary foci: pagan sacred tradition of the past; and Modern Paganism, or Neo-paganism’. He adds that there is often an overlap with studies in Women’s Spirituality, NRM’S/ New Religious Movements and Indigenous Spiritual Traditions.

This is perhaps when it gets very confusing. I might, for example, compare my guided meditations and ‘inner journeys’ with techniques of shape-shifting and so on, to shamanic practice. As a witch I might not call myself  a shaman… but someone else might.

I also remember at Academic conferences held by AAR/ American Academy of Religion and the European Association for the Study of Religions/ EASR including Wicca in the New Religious Movement and wondering whether that was because we were seen as ‘a cult’. Although I would never claim that Wicca is Indigenous, I do think our roots are in the past.

Conner has a serious criticism of ‘absolutist Language and Mentalities’. He cites Ronald Hutton as perhaps the ‘biggest offender’. He takes Hutton to task, for example on the subject of Hallowe’en and the notion that it is the Witches New Year. Hutton in the Stations of the Sun – a history of the Ritual Year in Britain writes, Conner quotes (italics are his): “There is absolutely no firm evidence in the written record that the year opened on 1 November”.

Interestingly enough Conner was at the same conference as Hutton – at Harvard in 2007. From the Harvard Gazette[1];

“Ronald Hutton of Bristol University in the United Kingdom delivered the keynote address, ‘Modern Pagan Festivals’, in which he traced the origins of the eight festivals that comprise the wheel of the modern pagan year. Hutton, who has written books on 16th and 17th century British history as well as on witchcraft, magic, and shamanism, argued that these festivals are not of ancient origin, as many of their celebrants claim, but can be traced back to relatively recent sources.

Interest in the pre-Christian religions of the British Isles began, Hutton said, in the mid-18th century when scholars began to study and to speculate about the ancient druids, then mistakenly believed to be the builders of Stonehenge and other megalithic monuments.”

When Hutton wrote The Stations of the Sun in 1996 there were many misconceptions about Pagan/ Witchcraft history including such claims as 9 million women dying during the Burning Times. Perhaps Hutton can be accused of ‘absolutist language’ . He did none the less encourage us all to go and look at pre-Christian history in respect of pagan practice and become more discerning.

Conner’s view on the ‘Western Worldview’ is interesting. He writes: “For years, I struggled with the notion of The West and with its meaning in relation to white supremacy and other matters”. Preferring to use the term pre-Christianization  he notes the works of “‘the early pioneers of comparativism in studies of the sacred’ such as James Frazer, Mircea Eliade, Max Mueller, ‘were frequently tainted by social Darwinism, Christo-centrism, Anglo-centrism, racism, and other biases, as well as a search for ‘universal’ and/or a ‘perennial philosophy’”.

There is also an interesting discussion about the terms Indigenous vs Ethnic, which has become important, also in the interfaith, interreligious dialogue.

So much for the extensive introduction. Conner starts his journey examining in ‘Deities and Kindred Beings’ with Chapter 1: Many are the Ancient Ones; the ‘Obstinate Persistence’ of Polytheism. In the ensuing chapters he continues with  journey basically through Europe – discussing the Mediterranean divinities – to Celtic & Germanic, Slavic & Baltic… rounding off this first volume with a chapter devoted to devil worship.

I should note that Conner has a bias towards Lithuanian culture, but this is because of his own family ties. His ‘maternal great-grandfather’s ancestral home, (was) at Heligenbeil – present day Mamonovo in the Kalingskaya Oblast 😊 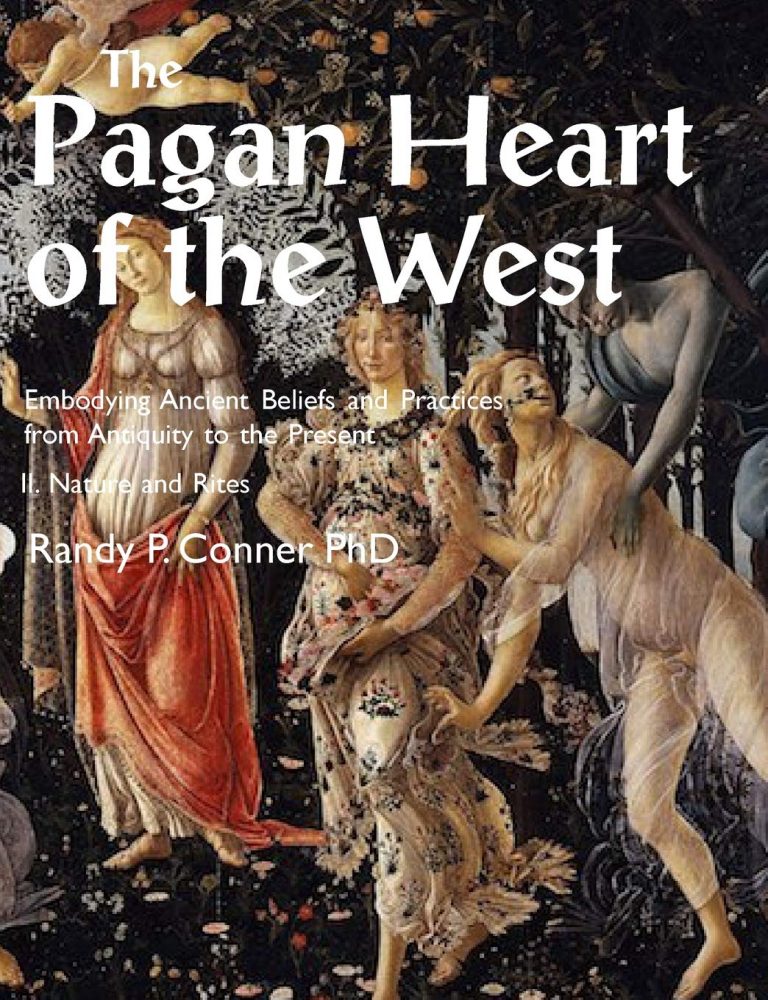 In the second volume, Nature and Rites, Conner “focuses on the veneration of nature — flora, fauna, elements, celestial bodies and on rituals of the seasons, life cycle, healing, divination, and magic. Like the other volumes, this volume demonstrates that paganism has not only persisted over the course of millennia, but that it has also undergone metamorphosis and innovation.”

He refers to ‘the renovation of Animism’ and notes the work of Graham Harvey in his book Animism: respecting the Living World/ 2006. This was an important milestone because Harvey defines animists as ‘people who recognise that the world is full of persons, only some of whom are human’ and rejects the idea that it was the domain of primitive or childlike cultures, often subjected in the past to Christian Missionaries.

In Chapter 6 – he discusses ‘The Wheel of the Year’ and how seasonal festivals and celebrations continued even during Christian times in Europe. Many ‘pagan practices’ were of course Christianised, albeit carnivalized as Conner notes.

In the chapter on Healing, Divination, and Magic Conner describes how traditional healers were seen as ‘extremely controversial’ – providing services which were frowned upon by the Church. Often called Wise Women or Cunning Folk – men and women – were nominally Christian to escape the watchful eye of the Inquisition. As Conner points out the ‘dramatic rise of  ceremonial magic’ in the Middle Ages and the practitioners were ‘a generally elite, male system of magic heavily influenced by Abrahamic religions’.

Randy P. Conner, Ph.D., is the author of several works on the intersection of gender, sexuality, mythology, and the sacred. He teaches Humanities, including World Mythology, in the Chicago area.

"Morgana is Anglo/Dutch and lives in the Netherlands. She is a practising Gardnerian HPS. Over the years, she has facilitated a variety of Wiccan groups. She is co-editor of the international and bilingual "Wiccan Rede" magazine, which was launched in 1980 and is coordinator of Silver Circle, a Wiccan network in the Netherlands. As International Coordinator for PFI she travels extensively giving talks and workshops about Wicca and Paganism."
Bekijk alle berichten van Morgana →
Dit bericht is geplaatst in Boeken, English articles, Recensies met de tags Neopaganism, pagan studies, paganism, the West. Bookmark de permalink.
We use cookies on our website to give you the most relevant experience by remembering your preferences and repeat visits. By clicking “Accept All”, you consent to the use of ALL the cookies. However, you may visit "Cookie Settings" to provide a controlled consent.
Cookie SettingsAccept All
Manage consent