The Witch Ball – and other short stories – by Doreen Valiente

The Witch Ball – and other short stories – by Doreen Valiente. Introduction by Melissa Harrington. Published by the Doreen Valiente Foundation in association with The Centre for Pagan Studies. ISBN 978-0992843090. Illustrations by Debbi Lee. 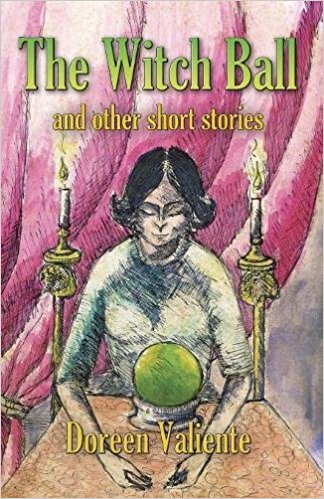 The story-teller is Ashton Clark, an older man well versed in folklore and magic. His listener is his friend Jeremy Blake. The stories featured, eleven in total, are from the Brighton area where Doreen lived and loved.

Melissa writes in the introduction:

“A posthumously published exciting addition to the literature of Doreen Valiente. This book represents a lost work by one of contemporary Paganism’s most loved authors. This collection of short stories is not only of significance to fans of Doreen Valiente, but of import within the wider genre of gothic fiction and folk horror. Featuring as the main protagonist Charles Ashton, who is wise, kind and learned, with a deep knowledge of folklore and magic, quietly tutoring his younger friend Jeremy Blake, these enjoyable tales weave and layer magic and folklore into a notable contribution to the interesting genre of magical tales written by magical practitioners.”

Here are some short extracts:

"Morgana is Anglo/Dutch and lives in the Netherlands. She is a practising Gardnerian HPS. Over the years, she has facilitated a variety of Wiccan groups. She is co-editor of the international and bilingual "Wiccan Rede" magazine, which was launched in 1980 and is coordinator of Silver Circle, a Wiccan network in the Netherlands. As International Coordinator for PFI she travels extensively giving talks and workshops about Wicca and Paganism."
Bekijk alle berichten van Morgana →
Dit bericht is geplaatst in English articles, Recensies met de tags Doreen Valiente, stories. Bookmark de permalink.
We use cookies on our website to give you the most relevant experience by remembering your preferences and repeat visits. By clicking “Accept All”, you consent to the use of ALL the cookies. However, you may visit "Cookie Settings" to provide a controlled consent.
Cookie SettingsAccept All
Manage consent