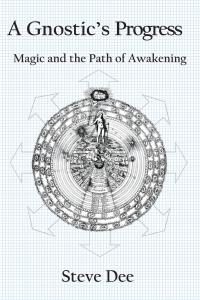 A Gnostic’s Progress can be found on Amazon, British sales

A Kindle edition is also available, with some illustrations in colour. To order, and more information.

When I was reviewing “Chaos Craft”, co-authored with Julian Vayne, I asked Julian for a little more information about Steve and this is what he wrote…

“A little bit about Steve Dee; he is a chaos magician, AMOOKOS initiate and gnostic explorer who lives in Devon. He likes cats, drums, body surfing and very loud music.  NB AMOOKOS Arcane Magick Order of the Knights of Shambhala.”

See the interview elsewhere in this edition of WR Online, Lammas 2016.

It was also whilst I was there that Steve gave me a copy of his new book “A Gnostic’s Progress… Magic and the Path of Awakening”.

I was already used to the way in which Steve wrote, which is a pleasure to read. Delightfully informative, without being pedantic, he writes from his own experiences and self-exploration. He introduces himself as “both an aspiring Process theologian and a creative magical practitioner” He continues: “Process Theology is deeply interested in what the emergence of religious myth reveals about the shape and concerns of human consciousness”.

Including several exercises and practical advice Steve navigates us through a Gnostic landscape. “Sculpting your system” is one of the exercises he describes, whereby “internal processes, such as feelings, experiences, or perceptions…” are externalised either with objects, or physical gestures/body sculpts. This reminded me of my own discovery of the importance of “muscle memory”. Only when we integrate an emotion or experience fully, that we can actually recall the physical sensations, can we truly talk of assimilation. Anyone who works magically knows how important this is.

This is what Steve is describing as “Magic and the Path of Awakening”. Awareness, consciousness, alertness leading to inspiration and being creative.

“Writing your own gospel…” is the title he gives to Exercise 4. From stage 1 of Reading/lectio to stage 5 Creation/creatio.

He gives us a couple of examples of how to stimulate this process of awakening ones’ magical self, including the “Mindful Mass to Sophia, Divine Wisdom”.

Steve writes at the end of this exercise – and perhaps a message to all of us now:

“When inspiration takes hold it may be that your approach will be less linear! Your acts of creation may be in making collage, cooking a great meal for friends or having a proper dance around your kitchen. So much of the stuckness that we experience comes from our need to get it right, but like many things in life most of us do better when we are allowed to relax a bit, to be curious and the explore things playfully.

I hope you have fun playing with this approach and allow yourself the space to explore how the things you love can inspire the creation of your own art. Peace, love and freedom to those willing to respond to their inner Muse!” 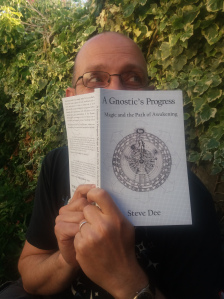 (Steve Dee with his book 🙂 courtesy of the Blog of Baphomet) 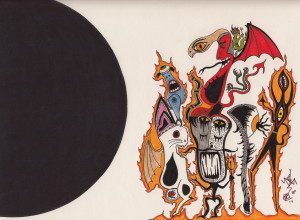 Waiting at the Event Horizon

"Morgana is Anglo/Dutch and lives in the Netherlands. She is a practising Gardnerian HPS. Over the years, she has facilitated a variety of Wiccan groups. She is co-editor of the international and bilingual "Wiccan Rede" magazine, which was launched in 1980 and is coordinator of Silver Circle, a Wiccan network in the Netherlands. As International Coordinator for PFI she travels extensively giving talks and workshops about Wicca and Paganism."
Bekijk alle berichten van Morgana →
Dit bericht is geplaatst in Boeken, English articles, Recensies met de tags Gnosticism, Hermetics, Process theology. Bookmark de permalink.
We use cookies on our website to give you the most relevant experience by remembering your preferences and repeat visits. By clicking “Accept All”, you consent to the use of ALL the cookies. However, you may visit "Cookie Settings" to provide a controlled consent.
Cookie SettingsAccept All
Manage consent