The Coming Forth of Babalon

It seems strange that the resurgence of Babalon – a goddess of female empowerment, after all – should come to be known initially through men. On May 23, 1587, in the quiet town of Trebon, Southern Bohemia, in what is now the Czech Republic, an extraordinary vision appeared to Edward Kelley, spirit-medium to John Dee, Queen Elizabeth I’s ‘noble intelligencer.’ Famously, there appeared a vision of a goddess in the shew-stone. She was dressed in beaten gold and had a crystal cross on her forehead, her neck and breasts were bare, like the Minoan snake-goddess found at Knossos. She said:

“I am the Daughter of Fortitude and ravished every hour from her youth. For behold, I am Understanding, and Science dwelleth in me; and the heavens oppress me. They covet and desire me with infinite appetite.”

She mentioned that she was “a harlot for such as ravish me, and a virgin with such as know me not.” And ended: “As yet, I walk in the clouds; as yet, I am carried with the winds, and cannot descend unto you for the multitude of your abominations, and the filthy loathsomeness of your dwelling places.” 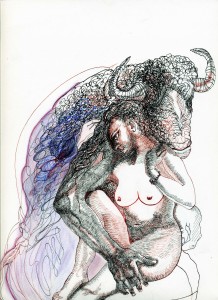 (At the heart of the Labyrinth – Emma Doeve)

It is interesting to compare and contrast the transmission received by Kelley and Dee with the early Gnostic text, Thunder, Perfect Mind – a significant part of the Nag Hammadi library – which explores similar paradoxical themes:

Then, in the early twentieth century, it’s Aleister Crowley who picks up the baton. As we might expect from Crowley, the imagery gets raunchier, and there is little doubt that he likes the ‘harlot’ part of the ‘Daughter of Fortitude’ best. Drawing on the imagery of John’s Revelation – “Babylon the Great, the Mother of Prostitutes with her Cup of Abominations of the Earth” – Crowley changes the ‘y’ to an ‘a’ for numerological reasons, and as ‘Babalon’ the Scarlet Woman becomes a suitable consort for The Beast:

“Lo! I gather up every spirit that is pure and weave him into my vesture of flame. I lick up the lives of men, and their souls sparkle from mine eyes. I am the mighty sorceress, the lust of the spirit.”

Crowley’s work is the catalyst for Jack Parsons, who was as passionate about Magick and Thelema as he was his pioneering work as an engineer and rocket scientist. Parsons felt he was missing the one thing needed to complete The Great Work, a Scarlet Woman all his own. The story of Parsons and Marjorie Cameron has been duly mythologized, with extravagant accounts of a mysterious red-headed and green-eyed woman somehow just turning up at his home, apparently in answer to a sexed-up Enochian conjuration he had performed out in the Mojave Desert. Whatever the truth, for a while Marjorie Cameron seemed a suitable mate and magickal partner, and after giving her a crash-course in Goetia and Enochian, the couple set to trying to invoke the goddess Babalon into a human vessel. There has been some confusion in retrospect, with many people – including Cameron herself at times – thinking that she was meant to incarnate Babalon, but it seems more likely that Parsons’ intent was they would create a child as the suitable vessel. Unfortunately, Cameron lost any child she and Parsons conceived together, and then Jack himself went up in flames. But he did leave us a vivid picture of his idea of Babalon:

“Black, murderous and horrible, but her hand is uplifted in blessing and reassurance: the reconciliation of opposites, the apotheosis of the impossible.”

At the same time as The Beast and his followers were pursuing the Logos of the New Aeon of Horus, the Shakti of the Age, Dion Fortune, was trying to call back into Being an older, more primeval, female force that she believed was sadly lacking in our Modern Age:

“I was of the Cult of the Black Isis, which is very different to that of the green-robed Goddess of Nature to whom the women prayed for children… the Black Isis is the Veiled Isis, upon whose face none may look and live… Some equate the Black Isis with Kali, and say that She is evil; but I do not think She is, unless one counts elemental force as evil, which I do not. She is indeed the Breaker in Pieces, but then She sets free…” (Moon Magic, p.44) 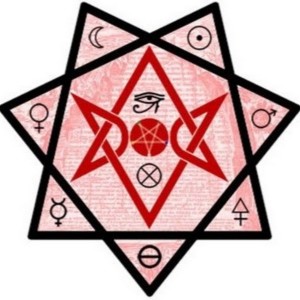 The problem with the return of the Babalon Current is that it is fragmented, which is not surprising given what has happened – and been allowed to happen – to the Divine Feminine for millennia, if not since the beginning of Time itself. The light of the Goddess Babalon’s energies are trying to return to us, but they’re being split and refracted into a whole different spectrum. The Scarlet Woman Mask of Babalon interferes with the full manifestation, and then, because of the powerful dynamism of the return of the repressed, other fragments splinter off.

We come to the present time, and at last, we get some women actively involving themselves with the Babalon Current, and giving coherent statements about their idea of what they perceive it to be, which isn’t always verbal or through the written word. Something about Babalon lends itself or even demands a non-verbal creative expression, such as dance and sound, and of course, visual art [see a number of the Women Surrealists, for a start: notably Leonora Carrington and Leonor Fini] and ritual. Amodali, multidisciplinary artist, musician and writer, dedicated herself to exploring the NUIT-ISIS-BABALON sex-magical current, but still concludes:

“My understanding of the current is that following the occult revival, the work of Crowley, Parsons, Grant and much of the exploration that followed during the 20th Century contributed to the ‘breaking of the waters’ in terms of her birth, but the definitive magical models and formulas that would enable a full flowering and manifestation of her magic is still not yet fully formulated.”

There have been many who have apprehended something of Babalon’s Fire, but Her cult has yet to be truly earthed; it has always remained fugitive. Many artists and outsiders have been drawn to Her because of the Fire of Creation. It is the Promethean impulse. But many – mainly men, it has to be said – mistake Her energy for the Luciferian archetype, also because they may be more comfortable with such a notion.

Then there is Lilith. For a short burst at the beginning of Time, Lilith is part of the Babalon Current: She was Adam’s first wife, created equal and simultaneous with him from the same earth. But he won’t acknowledge it, and demands Her submission. She finds the Word of Power deep inside Herself and flies away. She becomes first a storm goddess, and then is, quite literally, demonised. Perceptions are split: there is a version of Lilith, seductress of the Night, beautiful, sensual and transgressive, that certain occultists revel in, even though She can be dangerous, but this adds to the excitement. And for some women, there’s a Lilith who’s a female victim of misogyny and male projection, which they embrace and identify with.

The greatest story concerns the Goddess Inanna and Her descent into the Underworld. The Sumerian Inanna is most certainly of the Babalon lineage: one of the very first, in fact. The Goddess “opens Her ear to the Great below” – She abandons Her temples in the seven cities, abandons all of the glories of heaven and earth, and prepares to journey down into Hell. When asked at the Gate of the Underworld by Neti, chief gatekeeper, why She has made the Descent, Inanna says She wants to speak to Her older sister, Ereshkigal, and witness the funeral rites of Ereshkigal’s husband, Gugalanna. Neti is still uncertain, and tells Inanna to wait, while he delivers Her message to his Queen.

Neti tells his Queen Ereshkigal that Inanna – “in all Her glory” – is waiting at the Gate, and it enrages Her. Bolt the seven gates, She says, but leave them open just wide enough for Inanna to enter. Inanna passes through and is told to remove Her lovely garments and pieces of jewellery, one by one. “Let my sister the Holy Priestess bow low,” Ereshkigal tells Neti. When Inanna is stripped completely naked, She enters the throne room and Ereshkigal rises from Her throne. The Annuna, the Judges of the Underworld, surround Inanna and pass judgment against Her. Ereshkigal fastens on Inanna the eyes of death, speaks against Her the word of wrath, utters against Her the cry of guilt, and strikes Her. Inanna is turned into a corpse, a piece of rotting meat, and hung from a hook on the wall. When, after three days and three nights, Inanna still hasn’t returned home, a rescue operation is set in motion with Inanna finally re-ascending.

If you consider this story is from between 3,500 – 1,900 BCE, long before the Christian Gospels, in which Christ is crucified and then lies in his dark grave for three days and nights before being Resurrected, the Myth of Inanna clearly sets a precedent. The theme of the heroine descending into the Underworld, to suffer, to be stripped bare, to die, before being reborn, is the primal Shamanic crisis that would be emulated later time and time again. In the end, Inanna even honours Ereshkigal, because She understands that She and Her older sister in a way complement each other: they are the Dark and Light of Life. While Inanna’s corpse hangs like rotting meat on a hook, Ereshkigal is groaning as if in the pangs of Birth. 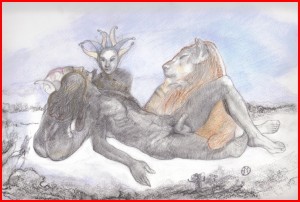 (‘The Sekhmet Working’ by Emma Doeve)

Of course, not all women who engage with Babalon agree on what She is, not by any stretch of the imagination, but the important thing is that they are all personal, individual experiences of Babalon by women living and working in the Present Day. So, hopefully, the examples and suggestions will encourage other women – and maybe even men! – to get to grips with Babalon themselves. It is about time.

Emma Doeve is a changeling child from the Lost World of what were formerly the Dutch East Indies, twice removed: once when she was taken on a big ship to Holland, where she grew up and went to school; the second time after Leiden University, when she left the Netherlands to find the birthplace of English Romanticism and re-connect with Nature.

She has lived in rural Scotland, Oxford, and Hay-on-Wye. She is first and foremost a Fine Artist, but also a Writer & Researcher, with an interest in the Occult and Esoteric, who has made use of Design, Graphics, Performance, Photography & Video in her work. She currently resides deep in the Heart of Darkest Surrey, with her partner Matthew Levi Stevens. They deal in rare books and have collaborated on a number of projects together.

1 Reactie naar The Coming Forth of Babalon