Conversations over the Forge – Metal Talks

When I first began asking Conrad, a domestic blacksmith and dear friend, whether he’d help me make my blade, he cautioned me that he wasn’t, himself, actively pagan. Moreover, he went out of his way to let me know that if magical or psychic elements were required, they were my bailiwick. I assured him that what I needed was the metallurgical limitations and design-for-use guidance, the forge and the coal and the hammers, and some muscle when my desk-jockey’s arms weren’t up to a particular task. He was comfortable with that.

It’s not that he’s not pretty pagan! There’s a lovely pair of carved soapstone figures in simple early Norse style that lives on a household altar (his term) stretch of shelving that’s prominent in his living room. A pair of soapstone candlesticks I saw once and bought for him and Margaret bracket the cupbearer and swordbearer nicely. Whether the smithy brought out the pagan in him or he went into smithing because it appealed to his pagan self, who knows. But he’s pagan in the way I used to be, not practicing but a fellow traveler, more interested in the tangible historical crafts than the intangible neoPagan Craft.

He may not have noticed the magic in his forge, but I did. He complimented me on the quickness of which I picked up how to crank his air blower for optimum heat and minimum smoke. Now, I’d done it a time or two before—about five years since. For my money, it felt a lot more like being tuned to all the elements as they came together during the process. Working the blower had a very masculine flavor, all fire, and air. I made it a point, unconsciously at first, to stand grounded, feet apart, well-balanced on both.

I recall vividly him telling me that he was “a psychic brick” (this in the midst of getting the fire up to heat for the major shaping). I know he’s wrong. First, he spoke not ten minutes later of the moments when he doesn’t seem to have to decide what to do with the metal, it and the hammer just do what’s needed and the shape that comes out is right and balanced and lovely. He has a couple of hanging lamp designs that came about by that means. I waited to catch my breath and pointed out gently that he was talking about what I call magic—which made fair nonsense of his claim to complete “brickness”. He spoke of his difficulty seeing a picture of what he wants to accomplish beforehand, and I told him about visualization techniques.

During the actual, critical forge-work, when he used six- and twelve-pound hammers on the not-so-mild steel of my workpiece to flow the metal into a roughly diamond cross-section with a minimum of blows and the least stress to the metal, I cranked and grounded and stared at the piece, forming the image of my blade into an overlay that lay ghost-like on the anvil around the metal. Conrad made steady reference to my rough sketch for length and width.

When it came to my turn on the hammer, shaping the curve and the point and the flare of the blade blank with three- and six-pound hammers, I slipped into the role almost as easily as I had that of apprentice bellows-cranker. Conrad’s preparatory briefings had warned me to build up my forearms in particular, so the hammers were manageable in my hand. He’d spoken of the need to strike so as to shape both sides of the heated iron at once—half with the hammer and half with the anvil—and the concept seemed to go straight from my ears to my hands when it came time to act on it. In two trial blows, I was doing what was needed well enough that I could tell it, even before he commended me.

Of the many magical moments I experienced during the project, that was one of the high spots, feeling the metal flow because I wanted it to, rather than because I was forcing it to. This phase of the work drew on the tangible feminine energies of earth and water, as I planted my feet against Gaia, let her tug do more than my share of the work of the forging, and watched the iron flow like sluggish mud. From then on, throughout two months of shaping work with a pair of drawfiles, I had no question what my blade looked like, only how long it would take me to expose that hidden shape to the world.

Before we were done, I told Conrad how similar were his magic and mine, and how thoroughly he under-rated his own abilities with his “psychic brick” putdown. I also remarked that if he stopped thinking of himself in that fashion, he might find it easier to connect to the voice of the metal. And he nodded. 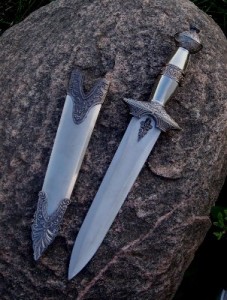 “Everything in a forge is either hot, sharp, or heavy.” Conrad began the safety lecture with the old smith’s caution, adding that the warning probably dated back to lectures given seven-year-old apprentices a thousand years ago. I was there to forge my ritual blade, with his coaching and assistance. I never hankered to be a blacksmith, but I’ve done a bit of wire jewelry work, and studied metal-work techniques at the time. So when my workings began to demand that I acquire a ritual knife, I called on an old friendship to ask for help and got it.

It’s not really so surprising that I know a working blacksmith; I’ve been a medievalist most of my life. You tend to have friends in odd trades when broadsword fighting (well, watching broadsword fighting), Scots and Saxon domestic crafts, and early music performance are among the interests you pursue outside of office hours. As a witch, it’s amazing just how much those interests prove useful to adding breadth to my understanding, my tools, and my magic. When I first began solitary practice, I wanted to keep my tools few and simple. A wand sufficed me nicely where more formal traditions specified an athame . (I can’t find that word in the Oxford English Dictionary, so I don’t use it—it’s a blade, I call it a blade.) However, as I progressed, I found the blade itself intruding into my meditations and dreams until I reconsidered. Like most successful magic, the object was real long before I began the process of making  it.

He knew what I wanted the blade for, of course. Like most medievalists, he numbers many pagans among his friends (the intolerant find some other hobby). Scoping out the size of the project and how much of it I could do, we went over the questions of how tough or springy a blade I would need, how big and how sharp, what uses I’d be putting it to, what metal-working methods I wanted to use. My magical instincts demanded no motor-driven work in shaping the ironwork, especially the blade, which eliminated modern knife designs that require hollow-grinding or elaborate shaping. His practical knowledge of forge technology and metallurgy set other limits. At the end of the discussion, we’d winnowed through the options to describe a leaf-shaped blade (I knew what it would look like before we started,but not why) that “would be a good, serviceable blade in 10th or 11th century northern Europe.” 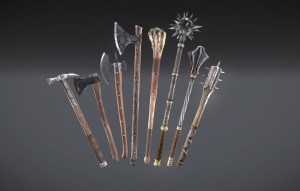 When I’d made my request, by phone, been accepted and encouraged and guided to a design, and finally began working sessions, I found that magic and legends, craft and Craft all tangled in our conversations while we worked. Ideally, it still takes two to run a forge—one assistant and one smith—one feeding the fire air and fuel or holding the work or fetching the next tool, another hammering or prepping the next step. Sometimes I was the tentative smith, being coached through every step aloud, and sometimes I was the assistant, much more confidently. (I’ve spent time in that role before, helping him finish a project while keeping him company.)

It was during the major forging session that the conversation turned to tempering the blade, which raised legendary metal treatments. Japanese and Norse legend alike describe quenching magical blades in blood, or (shudder) in the body of an expendable slave. Setting aside the fact that slaves were expensive property just about anywhen, there’s a simpler explanation. This “blooding” more likely reflects a pragmatic acknowledgment of reality: no matter what you’re doing in a smithy, you’re going to cut, bruise, or burn yourself sooner or later.

Me? Yes, I did…I had the forged blade blank clamped at a height to draw-file it into shape while seated. I took a break from the sweaty labor without unclamping it, and ran a knee into the point standing up, long before it had an edge; it cut quickly and easily just the same, and I felt a fool. Blunt or sharp, it’s a weapon, and—I’d been warned.

Another Kind of Forge

A phrase has been ringing in my head for a year now: craft in the Craft. The bending and shaping of witchcraft has as much to do with the hands-on magic of the artisan as it does the spiritual growth of the psychic or the practical aid of the healer. It’s an intrinsic part of my practice, one that’s so usual—in the medievalist circles I’ve frequented since the first northern California Renaissance Faire rang my bell in 1966—that I’m frequently taken aback by less hands-on approaches to magical tools and appurtenances.

My stubborn adherence to craft standards when preparing Craft items drove my excursion into the smoky world of blacksmith’s apprentice. It’s beguiled me into teaching a class in robe-making and attempting a related book project which has already developed far enough to have collected its first publisher rejection. It’s taken me out into the woods in search of found staves, led me into archery studies, set me planning when and where to dig clay for some home-built pottery.

While all these projects appear demandingly in front of me and recede ghostlike behind me (whether or not I complete them), in the background of my mind runs a quiet question mark: why? Why learn to spin fiber, card wool, weave a belt, dye a shawl? Why hand-sew a garment, embroider a dragon, carve a walrus from a laurel tree gall? Why fill my brain and weary my muscles handling unfamiliar tools in unfamiliar ways to achieve marginal-quality results?

What’s so important about knowing how a thing is made? My only answer is craftsmanship—the art that makes as much of the maker as the made. When Conrad asked me how I wanted to finish my blade, he heaved a sigh of relief that I didn’t want the “authentic” hammer-marks. Then (and only then) he confided the smith’s scorn for the customers who insist on hammer-marks “to show that it’s handmade.” He’ll try to educate a customer that hammer-marks are the last thing a quality smith leaves on a piece…and if the customer insists, then he charges ’em extra for the insult to his art.

Feeling thus, of course, I chose to forge my blade myself. And of course, my winter “coat” is a hand-made cloak. And of course, I’d really rather have a hand-thrown stoneware drinking bowl (mazer to the museum addicts) holding the water on my altar. In the end, the making of me is what this is all about; a forging process begun long since.

“Conversations Over the Forge” by Deborah Snavely. A series of essays pre-dating my initiation into the Wicca first printed in the Pagan Muse & World Report (1994–1996).