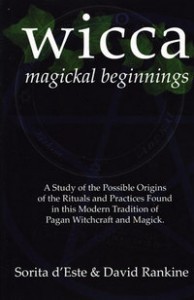 This review first appeared in the then paper version of “Wiccan Rede” (Imbolc 2009).

It has however become such a classic book that we have decided to re-publish the review.

There is also an in depth interview with Sorita and Karagan about the book: On the Black Chair (March 2014).

On the back cover of this book we read the following:

“The origins of the Wiccan Tradition have long been a subject of debate amongst practitioners and scholars alike. Did Gerald Gardner invent the tradition? Is Wicca a survival of a British folk magick system? Could it be a continuation of a European tradition of Pagan Witchcraft? Might it be that it evolved from Victorian ceremonial magick, or perhaps it is the modern manifestation of the medieval Grimoire Tradition?”

Indeed there have been many ideas and discussions as to where Gerald Gardner gathered the material that forms the basis of “Wicca”.

In this extensive book Sorita & David have examined their own material, passed on to them as initiated witches.

“Our preconceptions were constantly challenged as we explored the origins of the practices and beliefs from different angles in an effort to find possible solutions to the question of when and where the tradition may have originated. We separated the rituals into their component parts, then looked at each individually and even divided them up into smaller parts, before finally putting it all back together creating a colorful mosaic with our findings.”

Reviewing several sources of material from anthropology and psychology to folklore, grimoires and contemporary magickal orders a number of subjects typical to Wicca are examined, including the origin of the word Wicca. One, which I wasn’t aware of for example, is from “The history of the Anglo-Saxons” by Thomas Miller: “Scarcely an obscure English province is without its wise-man, or cunning fortune teller, those lingering remains of the Wicca of the Saxons.”

One interesting chapter is about the “Book of Shadows” and the origin of the term. Although the Craft is often cited as an oral tradition which would logically discount a BOOK to record incantations and so on, it is interesting to note, “the use of the hand-copied BoS in the Wiccan tradition can thus be seen as a likely continuation of a common European magickal practice” referring to the practice of hand copying grimoires.

From discussions about oaths, covens, degree systems, black-hilted knives, scourging, to the Golden Rule of Wicca, the Magickal Circle, pentagrams and elementals, Sorita & David have provided a fantastic source book. They have presented a separate section in which they list their conclusions as to the “Magickal Beginnings of Wicca”. I won’t list them here of course, go and buy the book 🙂

Mind you the bibliography alone is worth the money! Excellent.

"Morgana is Anglo/Dutch and lives in the Netherlands. She is a practising Gardnerian HPS. Over the years, she has facilitated a variety of Wiccan groups. She is co-editor of the international and bilingual "Wiccan Rede" magazine, which was launched in 1980 and is coordinator of Silver Circle, a Wiccan network in the Netherlands. As International Coordinator for PFI she travels extensively giving talks and workshops about Wicca and Paganism."
Bekijk alle berichten van Morgana →
Dit bericht is geplaatst in Boeken, English articles, Recensies met de tags research, rituals, Wicca, witchcraft. Bookmark de permalink.
We use cookies on our website to give you the most relevant experience by remembering your preferences and repeat visits. By clicking “Accept All”, you consent to the use of ALL the cookies. However, you may visit "Cookie Settings" to provide a controlled consent.
Cookie SettingsAccept All
Manage consent