The Dames from Thorn … and Amsterdam

When asked where they are going in Amsterdam, the average tourist will say they want to visit the Red Light District. Hoping to glimpse a sexy lady behind the red lit windows they often end up being fleeced for an expensive beer at one of the clubs.

When I have guests visiting we often go to Amsterdam and although we may have a walk down the Warmoesstraat and check out the Chinese Temple I more often than not tempt my guest to visit another part of the city centre which is dedicated to ‘ladies’. I mean of course the Begijnhof near to the Spui.

Situated between the busy shopping street – Kalverstraat – and Nieuwezijds Voorburgwal one enters the Begijnhof via a fairly non-descript wooden door. The whole area is enclosed and there is another entrance/exit so that you can walk right through, at least when it is open. The doors are closed every evening at 6pm.

As soon as you step through the door it is unbelievable – suddenly there is a serenity even though you are in the middle of Amsterdam. The last Beguine died on 23rd May 1971, Sister Antonia, aged 84. Since then it is no longer a ‘Begijnhof’ in the true sense of the word but nevertheless a lovely place to spend a quiet moment

Who were the Beguines, or Beghards, and when did they first occupy this courtyard in Amsterdam?

We read on the website that “the founding date of the Begijnhof in Amsterdam is not clear. The first time that it was mentioned is in 1307 in the ‘Baljuw-rekeningen van Amstelland’. In 1346 there is a document whereby the ‘Beghynhuys’ was given to the Beguines on 31st July 1346 by Coppe van der Lane.”

For detailed information about the history of the Begijnhof please refer to the website:

There is also a separate room dedicated to the ‘Miracle of Amsterdam’ – an event still remembered every year with a silent procession roundabout 15th March by the Spui. The Beguines looked after several objects rescued from the church ‘Heilige Stede’ during the iconoclastic fury of 1566.

Within the courtyard there are also 2 churches which are also worth a visit. One is dedicated to St. John & St. Ursula and the other is commonly called the ‘Engelse Kerk’ / ‘English Church’. 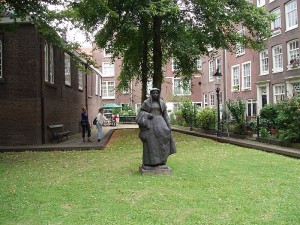 (A beguine in typical costume)

Another interesting feature of the Begijnhof are the outside wall paintings. In 1961 eight old ‘gevelstenen’ (literally: decorative gable stones) were cemented into one of the outside walls. They were originally from other parts of Amsterdam and depict biblical scenes such as the ‘Flight from Egypt’. 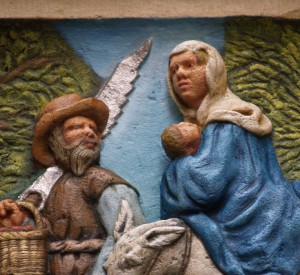 (A detail from the Flight from Egypt) 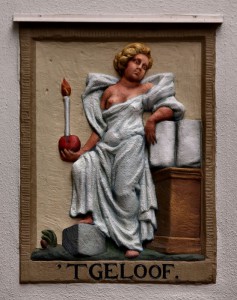 This one is my favourite 🙂 ‘Het Geloof’ / ‘Faith’ “depicting a woman standing, in her right hand a heart with a flaming torch (a symbol of faith lighting up the darkness”

Here they are, all together: 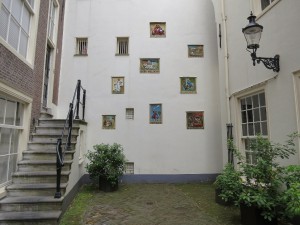 (Gevelstenen / Reliefs on the outside wall)

Concerning the Beguines: “As early as the commencement of the twelfth century there were women in the Netherlands who lived alone, and without taking vows devoted themselves to prayer and good works. At first there were not many of them, but as the century grew older their numbers increased; it was the age of the Crusades, and the land teemed with desolate women–the raw material for a host of neophytes.

These solitaries made their homes not in the forest, where the true hermit loves to dwell, but on the fringe of the town, where their work lay, for they served Christ in His poor. About the beginning of the thirteenth century some of them grouped their cabins together, and the community thus formed was the first Beguinage. The Beguine could hardly be called a nun; she took no vows, could return to the world and wed if she would, and did not renounce her property. If she was without means she neither asked not accepted alms, but supported herself by manual labour, or by teaching the children of burghers.”

I’ve always been intrigued by these ‘free women’ of Northern Europe. There were also Beguines in Belgium. In fact the Begijnhof in Bruges, Belgium is still very much in use and is also worth a visit. Sometimes referred to as ‘Beghards’ they were apparently not beggars. The name is derived from the followers of “Lambert le Bègue, also called Lambert li Bègues, (English: Lambert the Stutterer) was a priest and reformer, who lived in Liège, Belgium, in the middle of the 12th century”.

Walter Simons in his book Cities of Ladies: Beguine Communities in the Medieval Low Countries, 1200-1565 (2010) concludes that Beguines made important contributions to social and religious life by choosing not to take monastic vows. He notes that “Beguines never formed a centralized religious order or adopted a single rul. Although Beguinages had internal systems of ranking, all functions within the community, including that of Grand Mistresses, were held for a specific time only and rotated among senior members. Like the female Shakers of North America, Beguines combined manual work with sacred reading; indeed work itself had a religious significance. Like the Shakers, Beguines were known to engage in dance and ecstatic behavior.”

Reminds me of other women I know 🙂

Leaving Amsterdam we can find even more evidence of Beguines in the town of Thorn, although with marked differences. Thorn, in the province of Limburg, is known as ‘Het witte stadje’ because of all the whitewashed buildings.

“Thorn began with the founding of an abbey in the 10th century. In the course of time the abbey became a Stift/ cloister with as head a noble woman, who was also the Head of a Principality, also called Thorn. Also the governing body consisted of women.”

NB: A Stift was basically a cloister where only unmarried noble women were allowed. This sounds rather like the Beguinage but there is a big difference. The Stift dames were rich! 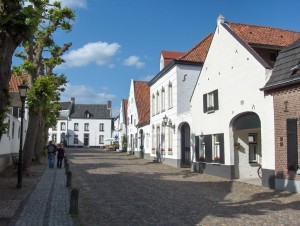 The Abbey Church of St. Michael in Thorn is also white… and gold. When I first saw it inside I remember thinking how ‘feminine’ it felt. It reminded me of buildings I had seen in Vienna too. 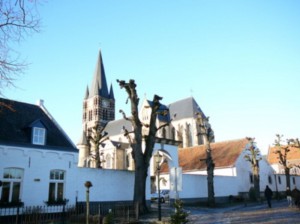 The first abbess was Benedicta who was the daughter Ansfried and Hilsindis. Ansfried from Leuven, Belgium founded the abbey in 985.

That the Abbey – or Stift – remained in the hands of the nobility is clear. Their wealth was enormous and they provided much work for the local people. The ‘Dames of Thorn’ also became the benefactors of the Templars possessions in Brabant in 1314 when they were handed over to the Abbey of Thorn (Brabant – tussen hemel en aarde by Jurre Yntema). 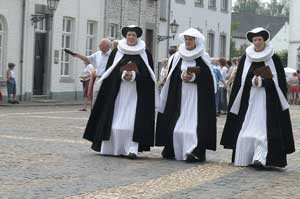 In Thorn there is also a Begijnhof – surprise, surprise 🙂

It is situated on the Kloosterberg 1, next to the abbey. The Beguines however seem to have been employed by the Dames – washing their linen etc.

Caroline Knops writes in her essay “They also took care of the church services, they rung the bells at particular prayer times. They also looked after the Dames when they were ill. If one of the Dames died the Beguines would pray for them until their funeral.”

So although the Dames were similar to the Beguines – being part of the cloister but not actually taking vows, being unmarried and so on – they don’t seem to be classed as Beguines.

In any event they were in full control until the French, led by Napoleon, came and overran The Netherlands from 1795. The Dames whose power had spanned 800 years – came to an end.

Thorn then reverted to a farming community but has become a big tourist attraction in modern times.

The stories of the Beguines and the ‘Dames of Thorn’ once again seem to underline the Dutch/Flemish entrepreneurial and free spirit. The mystics from Hadewijch of Brabant/Antwerp to Spinoza can still be felt.

So next time you visit Amsterdam do take time to visit the Begijnhof!

The Miracle of Amsterdam: Stille Omgang

There was also a begijnhof in Utrecht, see: http://www.collective-action.info/_CAS_BEG_NET_Beguinage-Utrecht but there is little left to see.

"Morgana is Anglo/Dutch and lives in the Netherlands. She is a practising Gardnerian HPS. Over the years, she has facilitated a variety of Wiccan groups. She is co-editor of the international and bilingual "Wiccan Rede" magazine, which was launched in 1980 and is coordinator of Silver Circle, a Wiccan network in the Netherlands. As International Coordinator for PFI she travels extensively giving talks and workshops about Wicca and Paganism."
Bekijk alle berichten van Morgana →
Dit bericht is geplaatst in English articles met de tags Beguine, Dutch history, free women. Bookmark de permalink.
We use cookies on our website to give you the most relevant experience by remembering your preferences and repeat visits. By clicking “Accept All”, you consent to the use of ALL the cookies. However, you may visit "Cookie Settings" to provide a controlled consent.
Cookie SettingsAccept All
Manage consent