Review: Spirits of the Sacred Grove 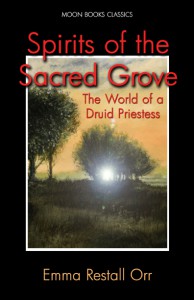 This is in fact a reprint of the original book Spirits of the Sacred Grove (1998). It was later published and re-titled Druid Priestess.

I remember the original version and being amazed by it. I had also seen Emma, a.k.a. Bobcat, at the Pagan Federation conferences in Croydon (London), and was awe-struck by her appearance. She appeared along with Philip Shallcrass. They were witty and lucid and totally inspiring.

Following the Wheel of the Year, she starts with ‘Samhain: the year begins in the dark north-west’. Telling the story, her story, the year unfolds. Interspersed with her own thoughts Emma philosophises over Druid cosmology, spirituality… and much more.

As the wheel turns through the dark of the year the brightness of Spring explodes. As Druid priestess and guide she takes us along the sacred rituals and Rites of Passage, through the archetypal and the personal.

I would recommend this book to anyone who ever doubted the value of ritual as a path of self-development and much more!  It was a pleasure to re-read this book. It hasn’t lost its charm or powerful inspiration.

Emma: “Magic is not a great concern with Druidcraft, in terms of the wizardry of raising power in order to effect change. The focus – on the joy that is the touch of the gods, on the awen of divine inspiration – steers the practice towards personal transformation, with the understanding that the clarity that comes with healing allows us to create our world more effectively.”

"Morgana is Anglo/Dutch and lives in the Netherlands. She is a practising Gardnerian HPS. Over the years, she has facilitated a variety of Wiccan groups. She is co-editor of the international and bilingual "Wiccan Rede" magazine, which was launched in 1980 and is coordinator of Silver Circle, a Wiccan network in the Netherlands. As International Coordinator for PFI she travels extensively giving talks and workshops about Wicca and Paganism."
Bekijk alle berichten van Morgana →
Dit bericht is geplaatst in Boeken, English articles, Recensies met de tags druids, practice, priestess. Bookmark de permalink.