The Significance of Martinmas/ St. Martin/ Sint Maarten and 11 November

In a recent presentation Sacrificial Magic and the Twofold Division of the Irish Ritual Year at the SIEF – The Ritual Year conference in Innsbruck, September 2014, Billy Fhloinn described the customs surrounding St. Martin.

He noted that Samhain (Irish for November) was the month when animals were slaughtered in readiness for the oncoming winter. Samhain as a festival later became Christianised to become ‘All Hallows Eve’ (1st Nov) and ‘All Saint’s Day’ (2nd November). This of course is the Wiccan celebration of ‘Hallowe’en’ or ‘Samhain’. The connection with death, sacrifice and honouring the dead is common to both traditions.

However he noted that it was at Martinmas, celebrated on 11th November (11-11), when the nature of the Blood rite or ‘Rites of Passage’ was most evident. It was customary to kill animals, usually geese, for St. Martin. The slaughter would take place at the doorstep. The blood, which was not used for food, was then daubed in the four corners of the house echoing the liminal aspects of the threshold and boundaries, keeping out ‘bad spirits’. 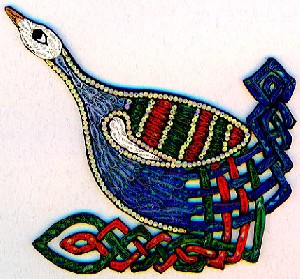 “The historical development of St. Martin’s Day in Ireland, and its relationship with the more ancient festival of Samhain (31st October ) is also examined, revealing a complex set of circumstances that saw much of the ritual nature of Samhain being adopted within a Christian contact in the medieval period”  (Billy Mag Fhloinn – abstract SIEF conference)

“In the old days, Irish celebrations started on the eve of Saint Martin’s Day, echoing the Celtic tradition that the day started at sundown. And the main ritual event of Saint Martin’s Eve certainly reflected Pagan traditions – the sacrifice of a cockerel or goose, which was allowed to bleed out. The animal originally might well have been beheaded and then carried around the house, the blood spurting forth and covering the designated “four corners” of the dwelling. In later days, the blood was collected in a bowl and then used to consecrate the building. After that … oven time!” (From “Saint Martin’s day in Ireland”) (1)

So who was St. Martin, Sint Maarten? And were similar rites performed in other countries? Why was the goose designated as the sacrificial bird?

To come nearer to home we only have to look at the patron saint of Utrecht – indeed Sint Maarten – to find out more.

“Martin of Tours” was originally was a Roman soldier. He was born in Szombathely, Pannonia in what we now know as Hungary, in the first half of the 4th century C.E.

“Martin wanted to be a Christian, and felt that as a Christian he could not serve the Roman Empire. Martin was imprisoned for this early ‘conscientious objection’, and not released until 357, when he was nearly 40. One day Martin met a nearly naked beggar at Amiens. He took off his cloak, cut it in half and gave the half to the beggar. Soon after this, he had a dream in which Christ appeared to him, wearing the half of cloak which Martin had given away. … Martin’s emblem in English art is often that of a goose, whose annual migration is about late Autumn. ‘St Martin’s Summer’ in England is a spell of fine weather that sometimes occurs around 11 November.”  (The Life of St. Martin of Tours 316-397)

The first St. Martin’s Church was founded in Utrecht during the first centuries of Christianity. It was however in 696 when Willibrord was Bishop of Utrecht that St. Martin was named the Patron Saint of the large Bishopric. Later many more churches would be dedicated to St. Martin especially in Limburg and Friesland.

Interestingly enough – and also similar to the practice of ‘Rent and tribute’ – the farmers celebrated 11-11 as their New Year having paid their taxes. Then it was time to feast. The St. Martin Fires (Sint Maartenvuren) were also lit. This is also reminiscent of the Germanic practice of lighting fires at their festivals. 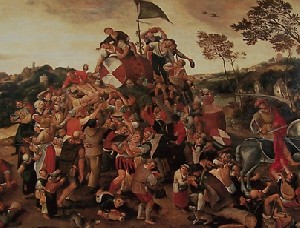 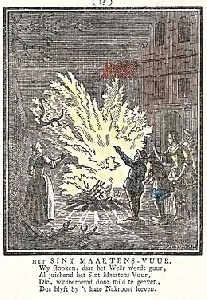 November was known in the farmer’s almanac as ‘Slaughter month’ / ‘Slachtmaand’ when there was the culling of animals in preparation for the winter. On 11th November/St. Martins Day it was the goose which was eaten in memory of Sint Maarten – the so-called ‘Maartensganzen’.

“Another legend ties Martin to geese – when he was to be made bishop, he hid in a small shelter on a farm … unfortunately disturbing some geese who immediately and loudly proclaimed his presence.” (1)

Well known for their watchfulness, the goose guarded the Temple of Juno in ancient Rome, and was also sacred to Berchta, a Germanic Earth Goddess. Freya was also said to be “goose-footed”.

In any event the goose was roasted and eaten on St. Martin’s day.

In Utrecht the custom of carrying lanterns on Sint Maarten/ 11 November is enjoying a revival.

As the children – usually between the ages of 7-12 i.e. primary school-age – walk with their lanterns they sing songs. The story of St. Martin and the sharing of his cloak (charity) and his generosity is of course the main theme. But as the children are rewarded with sweets we are also reminded of the Hallowe’en ‘trick-or-treat’.

As the Irish protected their houses with the blood of the goose aren’t we all subconsciously preparing for the dark months to come?

“As a calendar marker, Saint Martin’s Day denotes the end of the agrarian year and the final harvest of the year. Hard times began … and in the Middle Ages a period of fasting began on November 12th, lasting for the traditional forty days and known as the “Quadragesima Sancti Martini”. People ate and drank one last time before the fast.

This was facilitated by the agricultural preparation for winter – most animals were assessed as to their chances of survival and future usefulness, those who did not make the grade were killed and the meat preserved. So food was available in abundance around this time – similar to the Celtic Samhain. Goose were also nicely fattened up, leading to wholesale slaughter of the species and the traditional Saint Martin’s Goose in the oven.”

One last thing… today we remember 11-11 most notably as ‘Remembrance Day’ or ‘Armistice Day’ when we remember those who lost their lives “in the line of duty”.

(With thanks to Anne for helping with resource material… there is lots!!)

11-11-2017  from Maciej Witulski: “The article skips one important thing – in the past people used the Julian calendar and 11th November was in fact the date of so called “Old Halloween”. Similar customs are found in Belarus during the celebration of Dziady (Slavic Forefather’s Eve). There was official dinner, on the table was put the head of a pig, ram or rooster (in case if family was poor).” Thanks for the additional information Maciej!

For more information about the mythology of sacred animals and St. Martin please refer to Christianity: The Origins of a Pagan Religion by Philippe Walter. ISBN 978-1594770968

"Morgana is Anglo/Dutch and lives in the Netherlands. She is a practising Gardnerian HPS. Over the years, she has facilitated a variety of Wiccan groups. She is co-editor of the international and bilingual "Wiccan Rede" magazine, which was launched in 1980 and is coordinator of Silver Circle, a Wiccan network in the Netherlands. As International Coordinator for PFI she travels extensively giving talks and workshops about Wicca and Paganism."
Bekijk alle berichten van Morgana →
Dit bericht is geplaatst in English articles met de tags Celtic, Christian, Germanic, Irish, Martinmas, Netherlands, Saint Martin's day, sint-maartensfeest. Bookmark de permalink.