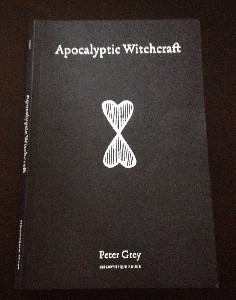 ‘Apocalyptic Witchcraft’ isn’t your typical fun and easy to read book. Since Peter Grey is extremely passionate about what he writes, one has to focus to stay on track with his associative mind and the loops he makes in his world of mysteries of blood and the moon. His anecdotes and connotations (which at times are written in a very staccato way) might be new to many but weren’t that new to me.

His view on witchcraft isn’t what most people are used to. It is partly based on rebellion and on a counter-attitude against modern duality-driven society, devastating it’s natural resources which we need for survival of our species in general. Witchcraft should be pro-self governing, he states. We need to burn 3 times and rise with every inch of Willpower, not at all connected to any formerly known system, yet reconnect with our nature, because everything else has proved itself to be in utter vain.

His dedication is to Babalon, who holds the cup aflame with love and death and who he quite often connects to Hecate, as sorceress and ‘Queen of the Night and Death’, and to Inanna as fertility goddess and of sacred sex. It’s the witch through whom Babalon speaks. He wants us to see non-lineair connections and not be completely enchanted by rationalism and stupefied by culture. Magic must become more savage to have any meaning in this world. We need to (re-) connect with the wolf, the shapeshifter who will find his own pack, his chosen family. We must not wait like armchair magicians and saloon witches trying to rationally analyse everything and foretell what is coming safely in our comfort zones. We have to realise that we are already in the battlefield. We’re being hunted and have to transcend, to become hunters.

We should use methods like dreams, myths and herbs and go for the abundance instead of mere sterile control. We should be able to read and feel what nature is telling us and use our knowledge for our own well-being. We can meet the witch and the devil at the crossroads to guide us through these elements. Whether we will feel guided or tricked remains to be seen. One thing is sure; we need to meet them to change.

But is that so? Is the witch a person having some kind of ‘save the world morality’? Isn’t she the trickster, a self serving loner, not afraid of death in any form, who has no-one to judge her, who has become her own acceptance,so to speak? Where are Baba Yaga, Hel and Louhi in his story of witchcraft ? What role do crones, the wisdom of old age and personality play in witchcraft? Are the devil and the witch mere Babalon’s advocates or avatars as Peter Grey suggests? In my humble opinion one can not simply hold the devil, as a representative of some goddess, responsible for the choices and judgments the witch makes on her own merits.

I am glad to have read this book, but I had a slight problem with it hardly leaving any space for the reader to make up his own mind. The writer gives his own, yet fully worked out and lived through opinions about a possible role for witchcraft in modern society in a sometimes pushy way but doesn’t seem to completely embrace nature’s needed diversity through which human (r-)evolution becomes possible.

I agree with him nonetheless that certain qualities, sometimes tools in life itself, have been taken out of the equation and some shift is needed to heal both our own and Earth’s bloody wounds. However, doesn’t this blood both cleanse and contain life force at the same time? If you have merely seen witchcraft through the eyes of Wicca, this book will be an eye-opener beyond any doubt.