Review: The Angels in Between 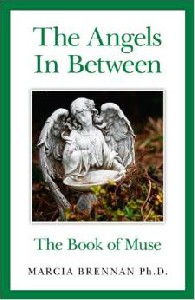 When I was asked to review this book my immediate response was ‘No, I don’t relate to angels at all. That belongs to the Christianity I never really belonged to and left long ago’. But leafing through the book I noticed a chapter called ‘Using humor to transform situations’, that started with the lines “Angels have a terrific sense of humor. They are experts at showing us how humor and play, including playing with words and energetic variables, can dramatically alter a situation. By transforming our attitudes, humor can enhance our personal power.” That won me for it and I’ve read the book cover to cover.

Marcia Brennan is associate professor of art history and religious studies at Rice University in Houston, Texas. She also serves as an artist in residence in the Department of palliative medicine at the M.D. Anderson Cancer Center in Houston. And that is a place where angels do a very good job, helping the dying people, their relatives and the ones that are there to support them. Marcia Brennan also is a clairvoyant, has been since her early years. One day as an adult she was standing in line in the post office, being annoyed at how long this was going to take. Then she realized the best approach was to cool down and be patient, and when she looked up again, she noticed the aura of the postal worker before her, and of his co-workers and the other people in line before her. A golden-white light looking like a softly rounded field that extended a few inches around the physical body, resembling a halo. “This experience produced a feeling of absolute joy. It was as though the light was coming into my eyes so quickly that I almost couldn’t see, yet at the same time I couldn’t stop looking, and I felt a powerful softness and tender acceptance of people in their humanity.”

That acceptance of people in their humanity is the attitude of the angels, as Marcia Brennan describes them. Apparently they are always present, just not visible to each of us. Although: Brennan does give exercises at the end of each chapter: Practicing seeing auras; Reading energy as a second language; Recognizing how dreams can serve as links between worlds; Practicing meditation; Seeing angels; et cetera. What strikes me most in all the stories of angelic presence is the compassion with which they meet humans. They are here to help us, and they use practical means as well by nudging people to other humans that can answer their questions. Or give pencils and paper to children who are about to lose their mother to cancer so they can express their emotions in a drawing.

I do believe the stories Marcia Brennan tells, even though I cannot see the angels. If only because her stories match with those I heard from other people about angels helping people in need. I’m still wondering about the nature of the angels. Are they the same as devas? It seems so because Ms Brennan describes the angels of the rose bushes and of palm trees just like plants have devas according to other authors. The thing is: the (arch)angels Marcia meets have specific names: Ariel, Azrael, Haniel, Michael, St. Therese and others. That suggests specific beings, persons, that belong to a certain world or ‘pantheon’ (by lack of a better word). Is it possible that a non-Catholic sees the same angelic person, but interprets it differently?

An intriguing subject! And there’s an important lesson at the end of each exercise: “As always, express gratitude to the angelic realm.” “As you increasingly open your heart to angelic presences, thank them for their constant love and care, and send your love back to them in turn.” Thank you angels, for ‘meeting’ you in this book and for all your caring and healing!