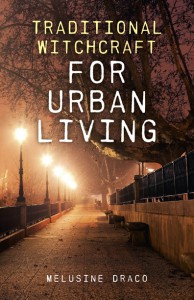 With the number of books available nowadays that address the solitary practitioner, it’s surprising to see how very few of them focus on one concrete common fact – that most of us witches (or pagans) do not live in a small cottage in the countryside, surrounded by fairy-tale forests and herbs. That many of us live in flats, inside blocks, in the middle of the city. If you are lucky enough, you’ll have a small house with a garden. If you are even luckier – and your job allows you to do so – you’ll live in the suburbs.

Even though most of the books mention that likely possibility, they do it in a rather ‘patronising’ way – IF one cannot go out to gather herbs, there’s the ‘possibility’ to use those in our kitchen. Personally I consider that that’s showing the reader that “it’s not very nice” but “it should work”, making him or her not appreciate what she’s using and regarding it as a “second hand element” (and we all know how important it is, for our practice, the feeling we put into something.)

In Traditional Witchcraft for Urban Living, Melusine Draco dedicates the whole of this small volume to address this situation. Mainly offering a useful way to develop our Craft practice in what she describes as “an hostile environment” – instead of just stating the obvious inconveniences that we have.

The surprising bit is that she doesn’t achieve this through the seeking of ‘exceptions’, of ‘country-like’ places in the city – she encourages the witch to rediscover the city, to look into it, and to change her (or his) attitude rather than getting stressed by the daily noises coming from the street. In short, she encourages us to make the best of what we’ve got.

She guides us to small places in our city or our own house that may have been overlooked. In each chapter she also offers a useful exercise related to the subject.

The downside of the book is that she tries to draw a broad line between what she considers Wicca & Paganism and witchcraft. To argue that she explains that witchcraft is not a religion, but a practice. That witchcraft is not bound by social rules and conventions, only by the personal morality of the individual. The author also argues that Pagans (including Wiccans/Witches) have a formal Wheel of the Year and that they generally believe that esoteric knowledge should be available to everyone – whilst witches, instead, keep it hidden because it is impossible to convey the meaning of the true mysteries without the appropriate teaching.

During the last decades, there have been several groups who have insisted in developing an alternative system to mainstream Wicca – especially after the publication of a variety of volumes by Llewellyn and the proliferation of different degrees of academic (or even reliability) among this books. The dogmatism popularised by certain books on ‘rules’ or ‘ethics’ like the Wiccan Rede, or the ‘Threefold Law’ (or others, like the 13 virtues) encourage those groups to look for an alternative term, Traditional Witchcraft, even though it is not based on any tradition and neither is a concrete set of practices or rituals, just “folksy and quaint ”.

The irony is that in this book, the author – who is one of those traditional witches – talks about the importance of drawing a circle, several festivities (amongst which we can find the historically inaccurate Ostara), and a personal and individual interpretation of the divine.

Now that to me sounds a lot like Wicca!

This downside doesn’t make the book worse – it just makes the reader raise an eyebrow, especially in those parts where the authors writes about what the old witches used to do. We barely know what witches do nowadays in the same province!

Another thing I really liked is that she covered a few topics that are not discussed in other similar books (as she herself points out), like working during the Dark phase of the Moon.

At the end of the book, Melusine raises a few very good points that I consider key for the solitary practitioner: The dark night of the soul, how do I know that this isn’t just a fantasy or illusion? Is this still truly my path?

In conclusion, the historical accuracy and the Wicca rant aside, I believe that this a small and valuable primer, for those witches who live in the city and want to find a few, very good, tips on how to develop their practice whilst  taking advantage of their surroundings.

A Gardnerian witch from the Basque Country, still figuring out things, most of them. I am also webmaster for the AdRosam site, a website of resources in Spanish for Gardnerian Seekers. I am also on Twitter and Tumblr.
Bekijk alle berichten van Alder →
Dit bericht is geplaatst in Boeken, English articles met de tags urban living, urban Witchcraft, Wicca, witchcraft. Bookmark de permalink.
We use cookies on our website to give you the most relevant experience by remembering your preferences and repeat visits. By clicking “Accept All”, you consent to the use of ALL the cookies. However, you may visit "Cookie Settings" to provide a controlled consent.
Cookie SettingsAccept All
Manage consent