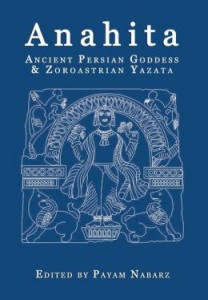 From Avalonia books: “The Indo-Iranian Anahita is an ancient Persian Goddess, who became a Zoroastrian Yazata (or Angel) and is still part of contemporary Zoroastrianism. Described as a beautiful maiden, who is strong, tall and pure, she is depicted as wearing a mantle embroidered with gold and as holding the baresma (sacred plant) in her hand. She is the Goddess of all the waters upon the earth, her full title being Aredvi Sura Anahita which means moist, mighty and immaculate (pure), and she travels on her chariot pulled by four horses: Wind, Rain, Cloud and Sleet. Closely associated with the King’s investiture she is a Goddess of Sovereignty, thought by some to be the Persian Aphrodite, who also has some remarkable similarities to numerous other ancient goddesses, including Ishtar, Venus, Nana and Isis. 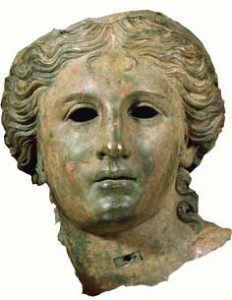 Anahita: Ancient Persian Goddess and Zoroastrian Yazata is a collection of papers, art and poetry celebrating this fascinating Goddess from more than 25 esteemed international academics, Zoroastrians, artists and writers. Each in turn share their research and insights leading the reader on a journey of discovery – from the Achaemenid Royal Inscriptions featuring Anahita and Mithra, to the possible relationships between Anahita and the Dame du Lac of Arthurian Legend, representations of her in Sassanian art, William Morris Hunt through to Anahita as the pre-Christian Virgin Mother of Mithra, as well as her role in purification and purity. Studies of the Sassanian rock reliefs, hot mineral springs, and her water ritual in Mahāyāna Buddhism, in addition to an examination of the Sassanid stucco discovered in the Barz-e-qawela in Lorestan province of Iran and women in ancient Elam are all brought together illustrating the significance of Anahita throughout Persian and Middle Eastern history.

I was particularly interested in this book because of my own interest in ANATOLIA. I had wondered before if the name Anahita and Anatolia were linked. And although there wasn’t a direct link there was enough material in this book, that my curiosity was more than quenched when I started reading this wonderful collection of essays.

The meaning and origin of Anatolia, the ancient name of Asia Minor, from M.L. Anatolia, from Gk. anatole ’the east’, originally ‘sunrise’ (which of course happens in the east), lit. ‘a rising above (the horizon)’, from anatellein ’to rise’, from ana ‘up’ +tellein ’to accomplish, perform’. Anahita means in sanskrit ‘who nurtures crops and herds’. Also ‘immaculate’,  that is pure. She is the Ancient Persian Goddess of water, fertility, war and the patroness of women.

As the immaculate, the pure and untouched, it is not difficult to follow the reasoning for historians to have connected Anahita to the cult of the Great Goddess, whether it is Cybele, Ishtar or Aphrodite. In this collection of essays we read about “Anahita’s Water Ritual in Mahayana Buddhism”  to references in Arthurian Legends. 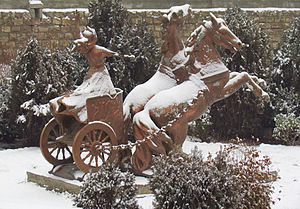 Statue of Anahita in Maragha, Iran 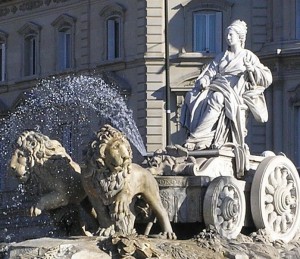 .. and the Fountain of Cibeles, Madrid, Spain

So what started out as a wish to to find out more about Anatolia and deities in the area (Asia Minor) … I discovered that Anahita was far more than a local Goddess.

From the Zoroastrian text Aban Yasht 5: “Angel-Goddess of all the waters upon the earth and the source of the cosmic ocean; you who drive a chariot pulled by four horses: wind, rain, cloud and sleet; your symbol is the eight-rayed star. You are the source of life, purifying the seed of all males and the wombs of all females, also cleansing the milk in the breasts of all mothers. Your connections with life means warriors in battle prayed to you for survival and victory.

A maid, fair of body, most strong, tall-formed, high girded, pure… wearing a mantle fully embroidered with gold; ever holding the baresma [sacred plant] in your hand.. you wear square golden earrings on your ears… a golden necklace around your beautiful neck… Upon your head… a golden crown, with a hundred stars, with eight rays… with fillets streaming down.”

Thanks to Payam Narbarz and Sorita d’Este & David Rankine from Avalonia Books for this important contribution. 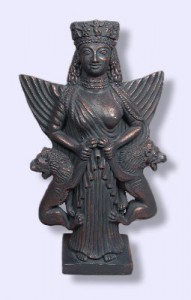 "Morgana is Anglo/Dutch and lives in the Netherlands. She is a practising Gardnerian HPS. Over the years, she has facilitated a variety of Wiccan groups. She is co-editor of the international and bilingual "Wiccan Rede" magazine, which was launched in 1980 and is coordinator of Silver Circle, a Wiccan network in the Netherlands. As International Coordinator for PFI she travels extensively giving talks and workshops about Wicca and Paganism."
Bekijk alle berichten van Morgana →
Dit bericht is geplaatst in Boeken, English articles, Recensies met de tags Anahita, Persian, Zoroastrian. Bookmark de permalink.
We use cookies on our website to give you the most relevant experience by remembering your preferences and repeat visits. By clicking “Accept All”, you consent to the use of ALL the cookies. However, you may visit "Cookie Settings" to provide a controlled consent.
Cookie SettingsAccept All
Manage consent