Although it is in German there are so many photographs that even if your German isn’t brilliant… like mine… it is still well worth the EUR 19,90 (!!)

From the anatomy of the skull… to crystal skulls… to examples of headhunters of Papua New Guinea this was an immense exhibition. There were  examples of pre-historic trepanation (drilling a hole in the skull to relieve pressure… and pain) which suggests that this was one of the oldest known surgical procedures.

That people have been fascinated by skulls is evidenced by the diverse cultures where skulls have been decorated and used as ritual objects.

Also there were examples of skulls being shaped or deliberately deformed from infancy as a sign of beauty. 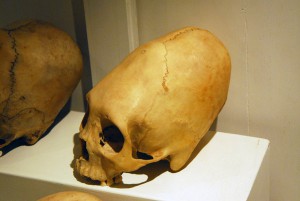 Skull deformation from South America.
I was certainly surprised at how diverse the interest in skulls is and how many examples have been saved. There was a whole section on the medical and anatomical interest in skulls, including measuring them in determining whether the person was in fact human or not. This was part of the now disputed ‘Racial theory’ (Rassenkunde) popular amongst anthropologists in the 19th century in Western Europe.
This catalogue is an absolute must for anyone interested in the ‘Cult of the Skull’ and missed the exhibition in Herne.

"Morgana is Anglo/Dutch and lives in the Netherlands. She is a practising Gardnerian HPS. Over the years, she has facilitated a variety of Wiccan groups. She is co-editor of the international and bilingual "Wiccan Rede" magazine, which was launched in 1980 and is coordinator of Silver Circle, a Wiccan network in the Netherlands. As International Coordinator for PFI she travels extensively giving talks and workshops about Wicca and Paganism."
Bekijk alle berichten van Morgana →
Dit bericht is geplaatst in Boeken, English articles, Recensies met de tags German, ritual objects, skulls. Bookmark de permalink.