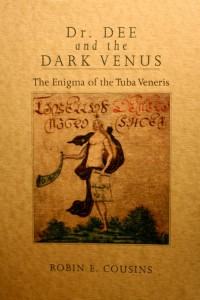 On the back cover we read: “Dr. John Dee, the Elizabethan Polymath, employed treasure maps and the assistance of Angelic beings in his search for hidden riches. Grimoires such as The Little Book Sacred to the Black Venus aka The Tuba Veneris offered an alternative path to wealth using less exulted spirits.

This edition, published by Neptune Press, is the first to include a facsimile of the original manuscript in full and reproduced in colour along with the Latin transcription, the English translation and a detailed examination of this medieval masterpiece.”

Indeed it is a delight to see a full colour facsimile of the original, now found at the Warburg Institute (Warburg Ms. FBH 510) in London. 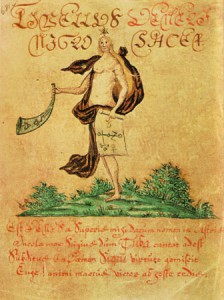 The Horn, or Trumpet of Venus, that is:

“The calling or arousal of the six spirits existing under the dominion of Venus, where the method of creating a Seal of Venus will be taught as well as her trumpet, the composition  of a circle, the correct names of the  and their calling, their seals and preparation. Also the consecration of the Book, the operation of the ritual and the farewell to the spirits, together with many other elements to be observed in the work.

John Dee, to the Lovers of the Magical Art, greetings

In his commentary Cousins describes this ‘manual of magic’ or grimoire, as a ritual “to raise spirits to ensure a prosperous and trouble-free life”.  He discusses the provenance of the Tuba Veneris and John Dee’s involvement. It is thought that it is attributed to Dee but not written by him or Edward Kelley for that matter.  European rather than English the style of the grimoire could possibly be German or Dutch in origin. Grimoires were, like Books of Shadows today, created by individuals who noted down ritual method, the seals and sigils, magical correspondences and so on.

It is this aspect which I found most interesting – an example of a grimoire and being able to see the original text. When I read the instructions for the ritual however I realised I could hardly ever think to make the Trumpet of Venus… “wrenching a horn from a living bull”. However it is interesting to note how the circle of protection is made and the use of a seal … in this case the Seal of Venus.

Cousins further discusses the theme of hunting for treasure which is central to the ritual. In a ‘Licence to dig’ he describes England in the sixteenth century … Dee’s partnership with Edward Kelley is also the subject of discussion and there is wonderful illustration of ‘Edward Kelley’s treasure map’.

Complete with clear illustrations of the seals this book is a must for anyone interested in Renaissance Magic, Enochian Magic, John Dee and Edward Kelley and the Grimoire Tradition.

The Horn, or Trumpet, of Venus with the symbols of the planets

"Morgana is Anglo/Dutch and lives in the Netherlands. She is a practising Gardnerian HPS. Over the years, she has facilitated a variety of Wiccan groups. She is co-editor of the international and bilingual "Wiccan Rede" magazine, which was launched in 1980 and is coordinator of Silver Circle, a Wiccan network in the Netherlands. As International Coordinator for PFI she travels extensively giving talks and workshops about Wicca and Paganism."
Bekijk alle berichten van Morgana →
Dit bericht is geplaatst in Boeken, English articles, Recensies met de tags Enochian magic, grimoires, John Dee, magic, Renaissance magic. Bookmark de permalink.
We use cookies on our website to give you the most relevant experience by remembering your preferences and repeat visits. By clicking “Accept All”, you consent to the use of ALL the cookies. However, you may visit "Cookie Settings" to provide a controlled consent.
Cookie SettingsAccept All
Manage consent