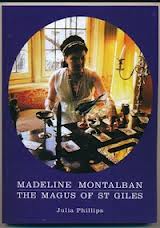 I knew that Julia was preparing this book so was thrilled to hear that it was being launched in mid September at The Atlantis Bookshop in London. This is also the home for Neptune Press; see below for full contact details.

The launch, which I was fortunate enough to attend, was in fact a double launch along with Luthaneal Adams’ new book Pagan Generation: A Young Person’s Guide to Paganism. It was a lively party with a number of well-known faces. A couple knew Madeline personally, or at least knew her professionally,

So who is, or was, Madeline Montalban, a.k.a Dolores North, the name I knew her by in the mid 1980’s? There were rumours of her being the ghost writer of Gerald Gardner’s book High Magic’s Aid … and how was she connected to the so-called ‘Angelic System’?

In this slim volume Julia reveals some of the mysteries surrounding this enigmatic, capricious lady.

By all accounts Madeline was not an easy woman to deal with. In fact Julia remarks how difficult it was to separate fact from fiction when dealing with the material she accumulated. Madeline was born on 8th January 1910 and died 11th January 1982. As the story of Madeline emerged I couldn’t help but notice a few quirky things. She was born in Blackpool, a stone’s throw away from where I spent my school years. Yet another Lancastrian in the gallery of prominent magicians and witches 🙂

Also I learnt that Madeline was a victim of polio which left her with a weak left leg.  I too know what it is like to be slightly disabled and felt a sudden affinity with her. That she later felt an affiliation with St. Giles “who held patronage over outcasts and cripples” was quite apt. By coincidence (!) she ended up living in the district of St. Giles in London.

As I read Julia’s book I began to understand more about Madeline’s drive and determination and why she looked down on so called gurus and masters. That she knew that she was being guided is evident. She was clearly called and she answered the call. Julia writes that it was the connection with the angel Lumiel, who “seen as avatar of the light and teacher of humankind, appears to have been her driving motivation”.

As we read the firsthand  accounts from, amongst others, Michael Howard, we learn too of the social life and times of London in the 1960’s and ’70’s. Madeline began to write articles on astrology and other esoteric topics for the magazine London Life between 1933 and 1953. She then became a writer for the nationwide magazine Prediction until her death.  She also wrote several booklets on astrology, under the pseudonyms including Dolores North, Madeline Alvarez and Nina del Luna.

I was becoming curious as I read the book as to how Madeline learnt to be a ceremonial magician. Of course it came as no surprise to learn that she was self-taught. Julia writes:

“Madeline’s system of angelic magic was Hermetic in the truest sense of that word. She studied widely and then synthesised those streams of knowledge from the ancient world into a cohesive system that was accessible to 20th century minds. Her teachings were contained within The Order of the Morning Star, which Madeline founded with her partner Nicholas Heron.”

Complete with some interesting photographs of Madeline and several sigils and talismans this is a delightful book.  Julia has also included extensive footnotes and a couple of appendices including the contents of the Angelic Course.

One can still study with the OMS. See for more information: http://www.sheridandouglas.co.uk/OMS.htm

"Morgana is Anglo/Dutch and lives in the Netherlands. She is a practising Gardnerian HPS. Over the years, she has facilitated a variety of Wiccan groups. She is co-editor of the international and bilingual "Wiccan Rede" magazine, which was launched in 1980 and is coordinator of Silver Circle, a Wiccan network in the Netherlands. As International Coordinator for PFI she travels extensively giving talks and workshops about Wicca and Paganism."
Bekijk alle berichten van Morgana →
Dit bericht is geplaatst in Boeken, English articles, Recensies met de tags Ceremonial Magic, history. Bookmark de permalink.