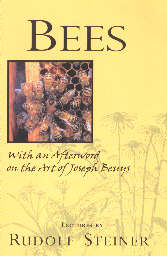 (NB an extensive review of this book, by Bobby Matherne (2002), is included elsewhere in WR-online. I have included it in full because of it’s depth and insights.)

The plight of the Bees has been something which I have been consciously aware of for about three years although my first real conscious encounter was much earlier when I saw bee-keeping in Turkey in 2005.

Unfortunately many people, like me, are so accustomed to having honey, beeswax, Royal Jelly around them that the subject  is taken for granted. Like cows in our meadows, bees are a part of our normal everyday life… no big deal. Right, no big deal until we realise how acute the current situation regarding Bees really is.

Einstein is reporteldy said to have said something to the effect of “If the bee disappears from the surface of the earth, man would have no more than four years to live.”
Actually he didn’t say this but the message does contain more than a grain of truth in it.
Read more: http://www.thedailygreen.com/environmental-news/latest/einstein-bees#ixzz1o9JHfFEx

Even if Einstein didn’t say much about bees Rudolf Steiner certainly did… and way back in the 1920’s. Nearly one hundred years ago Steiner gave very clear warnings about the demise of bees and the consequences of bees becoming extinct.

Regarding the artificial breeding of bees Steiner said:

“You can increase the production of honey, all  the work they do, and even the worker bee’s capability of accomplishing this work. The only problem is, as Mr. Muller has just stated, that this whole procedure should not be carried out in a way that is too rational and business-like. Next time we will investigate more thoroughly the matter of breeding of bees, and we’ll see that what proves to be an extraordinarily favourable  measure upon which something is based today may appear to be good, but that  a century from now all breeding of bees would cease if only artificially produced bees were used. We want to be able to see how that which is so wonderfully favourable can change in such a way that it can, in time, gradually destroy whatever was positive in this procedure. And we want to see, specifically, that beekeeping can become of great interest in getting to know all the secrets of nature, particularly how something on the one hand, proves to be very fruitful but, on the other hand, simply leads to death and destruction. And so it is that beekeepers can indeed be very happy with all the progress that beekeeping has recently experienced in such a short time, but this happiness will barely continue for on hundred years. ” (This was 1923)

The book “Bees” contains the transcripts of 8 lectures which Steiner gave in Dornach, Switzerland from February 3 – December 22, 1923.

The spiritual background of bees and the beneficial effects of honey are discussed at length. Mr Muller, one of the workers from the Goetheanum and a professional beekeeper, asks a number of questions which Steiner answered with many example of the life-cycle of the bees.

For those people who are not familiar with Anthroposophic principles and terminology the lectures may prove to be quite difficult to follow. Sometimes it is better to read the lectures aloud .. and “listen”  to them as they were intended. Visualising certain processes can also help one to grasp what he is talking about. And of course an understanding of bees though mythology and folklore will definitely help.

Also included are the blackboard drawings Steiner made to illustrate the various concepts he talks about.

This edition also includes “The artistic Alchemy of Joseph Beuys”, whose artistic work is very much influenced by Anthroposophic imagery and insights.

“Beuys, as he often explained in his interviews, saw and used his per formative art as shamanistic and psychoanalytic techniques to both educate and heal the general public.” For anyone interested in the secret/spiritual life of bees this series of lectures is highly recommended.

NB In the Netherlands there is the group called “BD Imkers” (BD = Biologisch Dynamisch) See: http://www.bdimkers.nl/page/view/language/en

"Morgana is Anglo/Dutch and lives in the Netherlands. She is a practising Gardnerian HPS. Over the years, she has facilitated a variety of Wiccan groups. She is co-editor of the international and bilingual "Wiccan Rede" magazine, which was launched in 1980 and is coordinator of Silver Circle, a Wiccan network in the Netherlands. As International Coordinator for PFI she travels extensively giving talks and workshops about Wicca and Paganism."
Bekijk alle berichten van Morgana →
Dit bericht is geplaatst in Boeken, English articles, Recensies met de tags bees, education, health, medicine. Bookmark de permalink.
We use cookies on our website to give you the most relevant experience by remembering your preferences and repeat visits. By clicking “Accept All”, you consent to the use of ALL the cookies. However, you may visit "Cookie Settings" to provide a controlled consent.
Cookie SettingsAccept All
Manage consent