Born in Ede, The Netherlands, Dennis lived most of his life in Zeist in the province of Utrecht.

In an area surrounded by forests and woods he was educated in the Anthroposophic school system.  In later years he would go on to write an article entitled “the Enchanted Path”, which gives us some insight into his teenage years, during which he also taught himself astrology:

“What do you do if you are sixteen and you suddenly realise that you want to become a magician? When you start wondering why wizards and magicians existed in the past, but not in modern day life? Why is that the case? Why shouldn’t I be a magician?

There are enough old books, Grimoire and legends to give some justification to their existence. Why shouldn’t I be a twentieth century magician?

His interest in things magical attracted to him to the wild hills of England, to Pendle Hill in Lancashire, which he visited on a cycling holiday in about 1974. It is also during this time that Dennis developed his interest in Wicca.

Only 2 years later in 1976 he met Lesley who shared his background in Anthroposophy, and together they ended up in the beautiful forested area of Bosch-en-Duin, Zeist.

His magical quest as Merlin was about to unfold:
During a visit to England in 1979, Real Magic would propel him into higher dimensions. A meeting with a couple of Witches in Brighton literally opened the door to what Dennis had always wanted .. to become a Witch. And on 19th September 1979 he and Lesley were initiated as Witches in Gardnerian Wicca.

From that moment on his life became one which was devoted to the Craft. Under the pen name Merlin his many enterprises ranged from launching a small newsletter in 1980 called “Wiccan Rede” to organising many activities, forming groups and founding the network Silver Circle together with his former partner Morgana/Lesley.

In 1984 he initiated the first Gardnerian Witch in the Netherlands – Jana – and he became the founding Father of the Dutch Gardnerian community. For more than 25 years he and Morgana would lead their coven, but at the same time help many pagans find their own path outside of the Craft.

When his daughter Rhianne Sylvana was born in 1985 he became a dedicated full time father and househusband. Was it a coincidence that Rhianne was born on 21 June, the Summer Solstice, in a hospital on the very same solar alignment as Slot Zeist? Who knows?

The ensuing years were a true fulfilment of the “Path of the Hearth fire” as he himself described this time period. From writing articles for Wiccan Rede and running a coven, to learning how to program computers,  cooking and cleaning, renovation work, and learning how to play Djembe:  His life was as varied as any Medieval Magician.

He was in fact the embodiment of a 20th Century magician: with his knowledge and patient teachings he created a lasting imprint on the Wiccan community in the Netherlands and abroad, which would not have been the same without him.

When his time on the Path of the Hearth Fire came to an end, he reinvented himself once more: having found his footing in life, he blossomed. He launched and moderated an authoritative Dutch Wiccan Internet forum, ran Wiccan Workshops, started to teach djembe and performed with his band ‘Slag ende Stoot’ at Medieval fairs.

It is in that same time period that he found his new love and High Priestess Sarah, with whom he made many exciting plans for the future: both in the Craft and in his personal life.  Sadly he was unable to complete these plans, and the Craft community will be poorer for not having been able to benefit more from his knowledge.

As Elder of the Gardnerian Community his spirit will live on in the hearts of many, not only in his beloved Pan Bos, but in the greater forests and woodlands. A true Robin, a great Merlin.

May the Gods guide him and bless him on his new journey, Blessed Be. 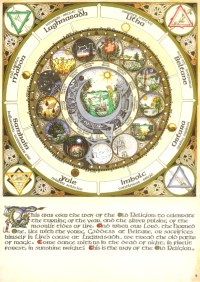 "Morgana is Anglo/Dutch and lives in the Netherlands. She is a practising Gardnerian HPS. Over the years, she has facilitated a variety of Wiccan groups. She is co-editor of the international and bilingual "Wiccan Rede" magazine, which was launched in 1980 and is coordinator of Silver Circle, a Wiccan network in the Netherlands. As International Coordinator for PFI she travels extensively giving talks and workshops about Wicca and Paganism."
Bekijk alle berichten van Morgana →
Dit bericht is geplaatst in English articles met de tags in memoriam, Merlin Sythove. Bookmark de permalink.