In 1996 I started using the GREENWOOD TAROT which was designed by Marc Ryan and Chesca Potter. I still use it with pleasure.

However it is no longer available. Recently Marc Ryan decided to team up with John Mattews and Will Worthington to create a new tarot deck based on the Greenwood Tarot. It became the Wildwood Tarot.

I was curious to see the new deck, wondering how close it was to the old but also what was different.  The most important thing though was “Does it work in the way I know the GT?” In a word… yes it does! Despite the very different illustrations and some changes with the animal and bird attributions of the court cards, the general feel is remarkably similar.

It feels slightly biased towards a more masculine approach. I suspect that is because the illustrations are less colourful, less ethereal.

I am still not used to the differences with the court cards. One of my favorite cards was the Queen of Cups = Heron. Now Cups are Vessels and the Queen is the Salmon. In the Wildwood Tarot the King of Vessels is the Heron. Strangely enough the attributions for the court cards in Wands/ Bows is the same. Gone is the Reindeer (was King of Cups) and new is the Eel (Knight of Vessels).

The names of the major arcana are generally the same as in the GT. The illustrations of the minor arcana are wonderful. The nine or Arrows/ Dedication is beautiful. Compared to the 9 of Swords in the Rider Waite deck the Wildwood card is actually a relief. (Yes you’ve guessed it.. I am forever getting 9 of arrows 🙂 ) 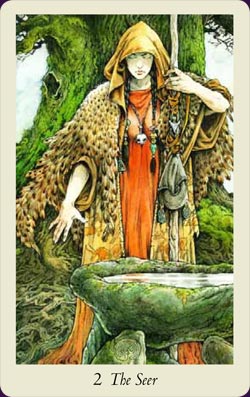 And the names  and numbers of the major arcana have also changed: [Greenwood tarot] (Rider Waite)

This takes some time of adjustment.Fortunately the meanings of the cards are the same.

The illustrations by Will Worthington are wonderful. An exhibition of his work is being planned at the Atlantis Bookshop later this year – 2011.

All in all I am very pleased with the Wildwood Tarot and would recommend it to everyone who has tried to get the Greenwood Tarot.

"Morgana is Anglo/Dutch and lives in the Netherlands. She is a practising Gardnerian HPS. Over the years, she has facilitated a variety of Wiccan groups. She is co-editor of the international and bilingual "Wiccan Rede" magazine, which was launched in 1980 and is coordinator of Silver Circle, a Wiccan network in the Netherlands. As International Coordinator for PFI she travels extensively giving talks and workshops about Wicca and Paganism."
Bekijk alle berichten van Morgana →
Dit bericht is geplaatst in Boeken, English articles, Recensies met de tags tarot. Bookmark de permalink.