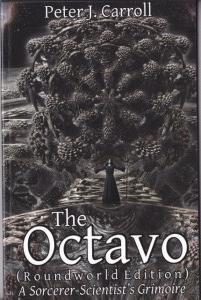 From the back cover we read:
“Every universe potentially has its own Supreme Grimoire containing the spells which define its reality and the magic which you can perform within that reality.

In this Octavo we have assembled scattered secrets for a Supreme Grimoire for Roundworld, the universe in which you’re standing. To this end we have taken some inspiration from Pratchett’s Discworld, and a lot from Theoretical Physics and Practical Chaos Magic.

“The most original, and probably the most important, writer on Magick since Aleister Crowley.” – Robert Anton Wilson, author of the Cosmic Trigger trilogy.

Peter J. Carroll is one of the founders of the Magical Pact of the Illuminates of Thanateros (IOT) which he led for a decade. He has spent thirty-seven years in research and experiment and is the author of three other books Liber Null & Psychonaut, Liber Kaos: the Psychonomicon, and Psybermagic, and The Apophenion.”

This is Peter Carroll’s second book in three years after a long absence. The Apophenion appeared in 2008. This new book is a continuation and describes eight spells “that appear to structure this reality”. Whatever (Quantum) reality is.  Reality according to Quantum physicists is weirder than we could have ever imagined. Welcome to Peter Carroll’s world.

Star Anise writes (I am quoting in full …)

“A chaos magick theory of everything. Improbable? And therefore possible! Having followed Frater  Stokastikos’ journey to perceive the shape of the universe, I’ve found the developments fascinating, and also impatiently wondered how these new discoveries apply to magick exactly. Well, now I know. In The Octavo Peter J.Carroll expounds a new map of the universe providing no less than a map of magick and therefore reality itself.

Abandon your current perceptions, suspend your disbelief, and rejoice in a viable replacement for that absurd big bang theory:
– does an exploding singularity make a sound if no-one can hear it? I think not. If your present map of the universe does not get turned completely inside out, it will at least get redefined. But don’t panic, because the very first magickal equation, the Spell of the Binding, reassuringly stops our worlds from literally falling apart. And neither will we imminently implode; cue the Spells of the Spinning which account for our ongoing dynamism.

But of course, if the shape of the universe seems so obvious after the first two chapters, why have we spent all this time getting it so wrong? The Spells of Illusion explain our civilisation’s folly regarding our misperceptions to date. Then we find out that magick works in this universe because chaos exists. And the Spells of Subtle Magic explain why our whims don’t materialize instantaneously.

The next two spells have the most familiarity to me as the core of Stokastikos’ earlier published equation of magick: link * probability.

Finally we have a practical magickal application for wave functions in the Spells of the Linking. The magickal link has probably suffered the most misunderstandings as one of building blocks in spelling, while the Spells of Impractical Magic show us just how much probability we need (and can do  without) for our enchantments. Now that we have most of the theory, we can add the finishing components and put it all together with the Spell of Practical Magic.

The eighth and final spell brings us back to the map where we started. We can navigate any terrain more effectively the better our map. And the same applies to magick. The Spell of the Narration shows us the need to understand the boundaries and somewhat more esoteric equilibrium that ebbs and flows between entropy and negentropy. Only mere decades after Crowley lamented the lack of rigorous investigation into the properties of the aether, Frater Stokastikos articulates a delicious theory of how and why magick works. But this map leaves plenty of uncharted territory (finite but unbounded specifically) for the most adventurous explorers to venture into. Mind the beasties, especially ourselves. With the knowledge of the eighth spell, we can aim for a happy ending no guarantees of course but Stokastikos challenges us to ask ourselves what we use our magick for.
After the eight spells, the action doesn’t stop. A call to arms no less to avert an apocalypse, or at least choose our preferred flavour. Do you have what it takes to transform into a Knight of Chaos? Add an invocation of Eris for chaotic inspiration, flex your strategic muscles in Sorcerer’s Chess and we complete this whirlwind of rebel physics and rebel magick. I can’t even begin to explain the maths and physics in the book, and happily I don’t need to Stokastikos does this expertly enough. If you think he has got it wrong, enjoy yourself trying to disprove it.

Of course, the very name of the book The Octavo comes from that parallel Pratchett universe the  Discworld. Just as its namesake contains the eight spells which hold the Discworld together, so too does this Octavo hold us in Roundworld. But it also liberates us.

What can one say about a book that redefines our understanding of our existence: original, essential, with far-reaching implications? All of the above and much more. Expect a journey through the aeons as well as around the universe, and a tantalising invitation to create our future. By the end of the book, phrases like “vorticitating hypersphere” and “immanentising the eschaton” will seem like your everyday vocabulary. But mind when and where you use them: don’t forget what happened to those who first challenged the flat world theory. “

I won’t pretend I understand a fraction of what Carroll writes.. as Lenny Susskind said about Quantum reality “If you think you got it.. you haven’t..” J

What I do know is that books like The Octavo with a revolutionary way of looking at magic are highly inspirational. “Nothing has truth and all things can happen”

Review of The Octavo by Dave Lee

Also for more information about Quantum Reality see the BBC Horizon program on You tube:

From black holes to holograms…

"Morgana is Anglo/Dutch and lives in the Netherlands. She is a practising Gardnerian HPS. Over the years, she has facilitated a variety of Wiccan groups. She is co-editor of the international and bilingual "Wiccan Rede" magazine, which was launched in 1980 and is coordinator of Silver Circle, a Wiccan network in the Netherlands. As International Coordinator for PFI she travels extensively giving talks and workshops about Wicca and Paganism."
Bekijk alle berichten van Morgana →
Dit bericht is geplaatst in Boeken, English articles, Recensies met de tags chaos magic, grimoires, magic. Bookmark de permalink.