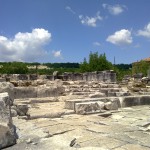 Tales of Anatolia: From Hekatesia to Aphrodisias, Part 1 – July 2012

June 2012 – I finally went back to Bodrum, Turkey after nearly 7 years . Before I left the Sanctuary to Hekate in Lagina in 2005 I uttered the immortal Arnold Schwarzenegger words “I will be back…” and there I was. But before I write about my latest journey a little update since ‘Hekatesia 2005’. To […]