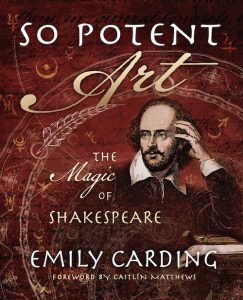 Mention Shakespeare and witches, and people will immediately think of Macbeth and the three Weird Sisters: “Double, double toil and trouble; Fire burn, and cauldron bubble!” Even if one doesn’t consider the cauldron as “the Witch’s tool par excellence”, the influence of Shakespeare on Wiccan ideas of witchcraft is, I believe, undeniable. How often aren’t we told that the gruesome ingredients the Weird Sisters throw into their bubbling cauldron aren’t the horrors they seem to be, but are really plants, called by their folk names. ‘Eye of newt’ is mustard seed, etc. Which of course is frequently used to argue that witches never have been the evil creatures of fairy tales, but mostly friendly herbalists instead, who were unfairly misrepresented by the patriarchy in order to suppress lay healers and common folk wisdom. It’s obvious that Shakespeare knew about plants and their uses and folklore.

Still, I’ve never been completely convinced by this particular interpretation of the witches’ brew in Macbeth, that can be found in So Potent Art as well. I imagine the play was written to entertain, not to secretly teach plant lore or a history of witchcraft. But I agree with another consideration Carding brings up: that the Weird Sisters of Macbeth aren’t exactly what we tend to think of as witches, i.e. human practitioners of some form of witchcraft. They are spiritual beings more akin to fairies. They can be seen as the ancient goddesses of Fate, who not so much incite Macbeth to evil deeds, but rather reveal the evil that is already present in him. It’s even possible to interpret them as representatives or embodiments of the three aspects of the goddess Hecate, who Carding, in line with many Renaissance thinkers, identifies with the World Soul. At the same time, they are stage witches: roles written to depict what people would ‘recognize’ as witches at the time. So far regarding the witchcraft in Macbeth. The magical elements of The Tempest and A Midsummer Night’s Dream are equally well known. But there is much more magic and occult wisdom to be found, for instance in The Winter’s Tale and in the sonnets.

This book however does more than identify and comment on the traces of Renaissance hermetic philosophy and folk traditions in Shakespeare’s plays and poems. Emily Carding is a professional actor and theatre-maker specialized in Shakespeare, but also a writer on esoteric subjects, a creator of tarot decks, and an Alexandrian initiate. So Potent Art provides a concise magical course, drawing upon words of the Bard. It shows how a reading of Shakespeare can offer magical students ways to actively work within a Hermetic philosophical framework with concepts like the four elements, astrology, alchemy, or the Cabalistic Tree of Life, as well as develop an understanding of and relation with nature spirits and the goddess Hecate, by exploring Shakespeare’s writings. It also works the other way round, showing lovers of literature how ideas from contemporary and earlier esotericism can elucidate meanings and deeper meanings in Shakespeare, bringing the texts and the characters to life through magical exercises and experiences. A process of mutual shedding light on between an enchanted worldview and the texts of Shakespeare is set in motion, resulting in an ever increasing illumination, or comprehension which is not just intellectual, but spiritual and emotional as well. It is very stimulating and inspiring. In me it evoked a strong but not very realistic desire to instantly read the complete works of Shakespeare both in English (with explanatory notes) and in translation, to view as many different performances on dvd as I could find, and most of all: to set up an amateur theatre group!

There is of course a definite link between Wicca and theatre, since Gerald Gardner first came into contact with British witches through the Rosicrucian theatre group of the Crotona Fellowship. And there can be absolutely no doubt of the transforming power of theatrical imagination. Recently, acting has been shown to literally change one’s mind, or sense of self. So by assuming god positions, enacting mythological stories, and ‘Drawing Down the Moon’, magicians and witches are not just carrying out formal ritual gestures and speaking words that aren’t their own, but are really transforming themselves. If we follow the common reception of Aristotle’s ideas on theatre, the effect on others can be equally powerful. According to this view, a well written and performed tragedy provokes  catharsis, a psychological purgation or purification in the spectators. An interesting side note and food for thought is Carding’s observation that actors without a magical background have less difficulty acquainting themselves with the magical approach, than magicians without a theatrical background have with things like rehearsing and memorizing lines.

Although I’ve read the book as quickly as I could now in order to write a review, it deserves to be read at a much slower pace. So Potent Art is divided in twelve chapters, which makes it perfect for a one year study course. There are ritual / dramatic exercises, using Shakespeare as a guide. For beginners and non-anglophone witches this book might be a bit of a challenge, but especially with the help of additional books I reckon it can be a most rewarding teacher. So Potent Art ends with the text of Hekate: Genesis as an example of ritual theatre. Hekate: Genesis was performed at the Hekate Symposium 2013 in Glastonbury and is an enactment of the separation of divine Light from the primal Source, and her subsequent descent into matter to become the Soul of Nature. The piece was created by a creative ‘cut and paste’ technique using phrases from Shakespeare’s works. Carding encourages the readers to search for useful passages themselves online, and to compose their own magical Shakespearean rituals. 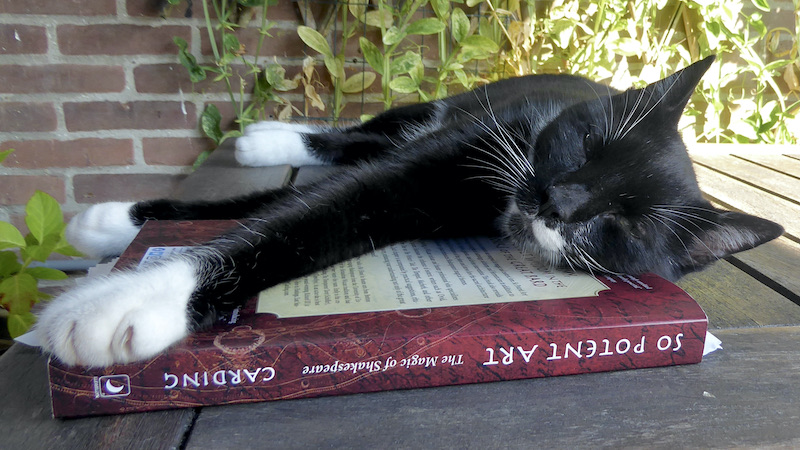